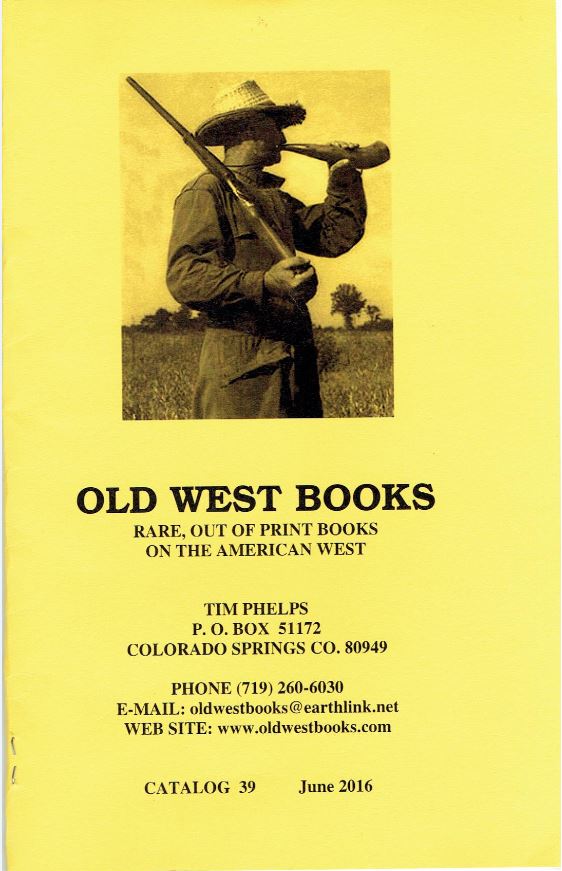 Books on the American West.

Old West Books has issued their Catalog 39 June 2016 of Rare, Out of Print Books on the American West. Old West offers a selection of books geared toward the serious western collector. Along with some better known items, you will find many obscure yet important books on the West. For example, there are many accounts by people who lived through memorable events and times, perhaps not as the famous cowboy or gunslinger, but were familiar with them. Others are written by otherwise unknown people who struggled the overland trails west in the days before the railroad arrived. Quite a few of the books were privately printed just for friends, meaning the runs were very small and their rarity today pronounced. Nevertheless, they can provide glimpses of the Old West otherwise unknown or forgotten. Here are a few selections from this latest western catalogue.

We begin with one of those overland travels, and it was no easy trip for this young lady. The title is Pen Pictures of Early Western Days, by Mrs. Virginia Wilcox Ivins. The author grew up with her uncle in Keokuk, Iowa. He was a founder of the town. She married at 20 and then began her overland trip to California in 1853. The journey was difficult for the pregnant lady, the climax being having to give birth in the Sierras, with no water and nothing but men around. I never really understood why, but for some reason, in the old days, one of the prerequisites for giving birth was to boil some water. "With no one near to help, comfort or relieve," she writes, "God only knows the fear and agony of that dreadful time." Mr. Ivins didn't have all that easy a time either, having been held captive by plains Indians. Her account runs through to the Civil War. The book was privately published many years later, in 1905, Mrs. Ivins back in Keokuk. Item 44. Priced at $875.

Speaking of being captured by Indians, Mary Carmichael tells us a about a bunch of captivities in Pioneer Days, published in 1917. This copy includes the rare jacket. Charles Hess saw his whole family, other than a sister killed, whom he rescued. Lewis Wetzel was captured at age 13, escaped, rescued a woman and child, and is said to have killed 27 Indians. It should be pointed out that authorities believed some of them were peaceful Indians and charged him with murder, but Wetzel effected a second escape, this time from authorities. Alexander McConnell was captured, killed his captors, escaped, was captured again, and escaped again. This book provides great excitement, though the stories are told from a paleface point of view. Item 11. $475.

Harry Tracy was a turn of the century outlaw, a man whose manhunt captured attention throughout the West for almost two months. Tracy cut his teeth with Butch Cassidy and the Sundance Kid. He would go off on his own, committing various acts of robbery and theft. In 1898, he and some partners were pursued by a posse in Colorado. They shot and killed one of their pursuers. Tracy was imprisoned in the Aspen jail, only to escape. He would be involved with numerous crimes across the West, was imprisoned several more times, and always escaped. Eventually he made his way to Portland and hooked up with another escaped convict, David Merrill. Merrill's mother lived in Portland, so police staked out her place, captured Merrill inside, and stopped Tracy with a bullet wound running away. Of course, no jail could hold them. The pair escaped the Oregon penitentiary, setting off the 58-day manhunt that captivated the West. Tracy was not one who took pleasure in killing people, but he had no reluctance to do so if someone got in his way. The first man he killed while on the run was his partner and brother-in-law, Merrill. Evidently they had a falling out. Several posses attempted to capture him, but he repeatedly shot his way free. He would kill six more attempting to take him before finally being surrounded in a field in Creston, eastern Washington State. Wounded in the leg and bleeding badly, Tracy saw no way out. He shot himself. Tracy was only 26 years old. You can read about Tracy's career in this rare book, Life and Adventures of Harry Tracy The Modern Dick Turpin, by Lloyd Jones, published in 1902. Item 46. $5,250.

This next man was born in Missouri in 1859. While Charles Eldridge Griffin called the West his home, he did a lot of traveling. Rather than being a robber, he was a performer. Griffin applied his magic skills at various circuses, working his way up to the Ringling Brothers show, and finally Buffalo Bill's Wild West. He signed up for a European tour with Cody in 1903, and stayed there until 1906. He was noted for magic tricks, sword swallowing, ventriloquism, and such. He suffered a minor stroke that year, and with that his serious performing days were over. He returned to his home of Albia, Iowa, where he had published numerous pamphlets about the magic arts in the past and in 1908, published his major work, Four Years in Europe with Buffalo Bill. Item 33. $325.

William Wingate Sewell came from about as far away a place to the West as an American can come - northern Maine. He was a logger and guide in the backwoods, and spent almost all of his life there. So, what is he doing in a catalogue about the American West? In 1878, Sewell was introduced to a sickly but adventurous young man who was always pushing himself to the limit. That young man was Theodore Roosevelt, just 19 at the time. They became good friends, and Sewell guided Roosevelt on various hiking, hunting and fishing trips on that and a couple of other visits to Maine over the next year. In 1884, again pushing himself to the limit, Roosevelt decided to operate a ranch in North Dakota. He called on Sewell for help, and the latter became his ranch foreman. It was during this period that Roosevelt became a dedicated conservationist, which would lead to his establishing five national parks, numerous national monuments, and the Forest Service. Over the severely bad winter of 1886-1887, the ranch failed, Roosevelt returned east, and Sewell went back to Maine, where he lived out his life. His book, published in 1919, is entitled Bill Sewell's Story of T. R. Item 90. $875.