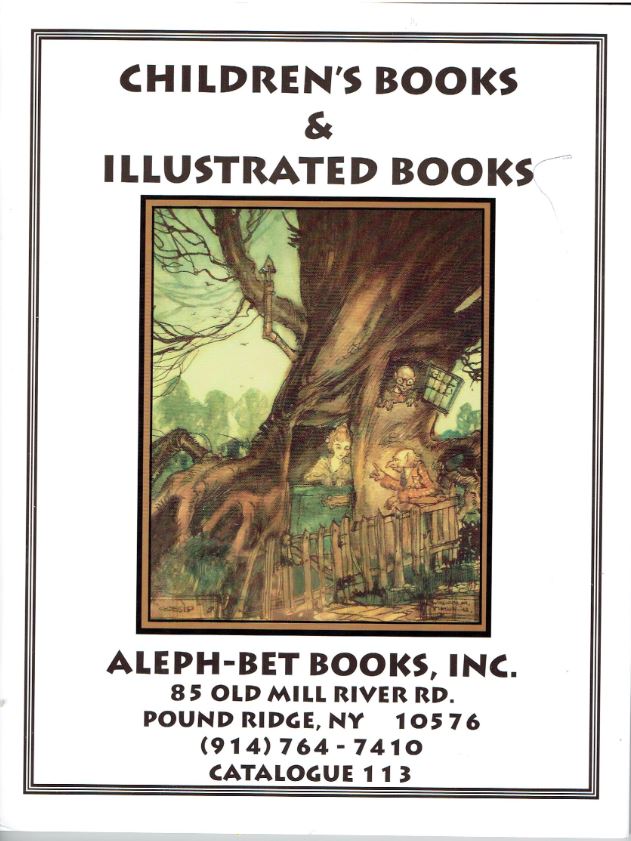 Aleph-Bet Books has released their Catalogue 113 of Children's Books & Illustrated Books. It follows their typical format – almost 600 books and ephemeral items, most all both for children and illustrated, each described and pictured in color in the catalogue. These books were once meant for people who collected children, but today they're more suitable for those who collect children's books. Here are a few samples.

We will begin with some refreshing honesty. Item 548 is P. L. Travers' Mary Poppins From A-Z, published in 1962. Travers was an actress and writer in her native Australia, but moved to England at the age of 25. Ten years later, her first book was published, Mary Poppins. She wrote many more books, but by far the best known is Mary Poppins and its sequels and related books such as this one. What is particularly interesting here is this copy is accompanied by a couple of letters Travers wrote to Blanche Campbell, owner of a Los Angeles bookstore. Travers sold the film rights to Mary Poppins to Walt Disney, but she was not pleased with their interpretation. She was particularly displeased with Disney's mixing animation with the real characters. Holding nothing back, she writes, "Well, you can guess how I felt about the movie – not very good, far from the book and I hate the admixture of cartoon and human and I felt Dick van Dyke quite miscast and wrongly elevated to being a partner with Mary Poppins in creating Mr. Disney's own version of what he calls 'magic'..." Disney ignored her complaints. Travers does end on a practical note: "Anyway it sells books and that is all that I care about." Not entirely true, as Travers refused to sell Disney the rights to any further Poppins' stories. Priced at $900.

Here is an early example of books and modern technology being entwined, long before the advent of electronic books. Item 284 is Man in the Moon Stories Told Over the Radio-Phone. The radio-phone? Is that an early cellphone? No, it is actually what they were calling the recent invention in 1922 now simply known as radio. The author, Josephine Lawrence, had written a series of stories for the Newark Sunday Call, and had been asked to read them over the city's new radio station. The reading ended up being handled by William McNeary, and the stories became very popular in early radio. This book collection of 18 stories was published in 1922, and to illustrate it a man noted for his newspaper cartoons was hired. That man was Johnny Gruelle, remembered today not for his cartoons but for his book and doll character, Raggedy Ann. $600.

Not all children's books are harmless fun. Racism and bigotry found its way into many titles in the first half of the 20th century. Many of the authors probably didn't even realize how demeaning their stereotypes were. Item 2 is Picaninny ABC, a book published in London in 1905, illustrations by Vernon Edward Barrett. "A" is for Alabama Coon, "M" for minstrel, "U" for Uncle Tom, "W" for watermelon. The big-lipped stereotypical illustrations are grotesque. $1,200.

Item 56 is a compilation of six previously separately published short tales, together under the title Twinkle and Chubbins, Their Astonishing Adventures in Nature-Fairyland. The author of this 1911 book was officially Laura Bancroft, except "Laura Bancroft" did not exist. That was one of several pseudonyms used by L. Frank Baum, who wrote his most notable books, the Oz series, under his actual name. In the stories, Twinkle regularly finds himself in unusual places, similar to Dorothy's adventures in Oz. This book was illustrated by Maginel Wright Enright, Frank Lloyd Wright's sister. $4,000.

Next up is the story of Bobbity Flop and a family of humanized rabbits. The eldest bunny has behavioral problems, which leads to various adventures. If this sounds to you a lot like Peter Rabbit, you aren't the first to think that. The timing, 1912, was just a few years after Beatrix Potter's similarly themed tale had its great success. Author Jessie Pope was a prolific writer of light verse and children's stories. However, she became both a popular and unpopular writer during the First World War. She wrote poems that were strongly pro-war, treating it almost as if it were sport in which all young men should cheerfully participate. The reality of that war, and the fact that Ms. Pope was not a particularly good poet, consigned her to obscurity as the years went on, while others no less famous in their day have had more lasting reputations. By the way, the illustrator of this rabbits' story was Augusine MacGregor. Mr. MacGregor? Item 455. $175.