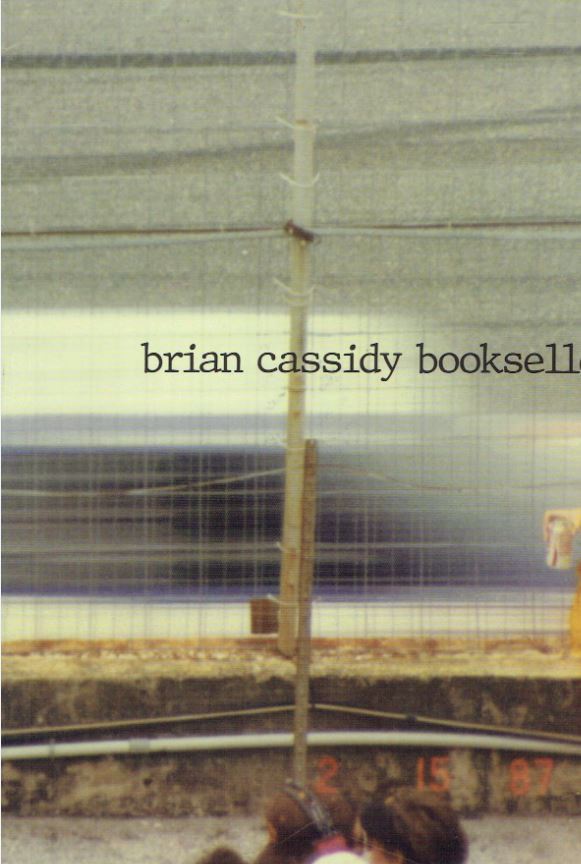 Brian Cassidy, Bookseller has issued Catalogue Eleven, featuring archives, photographs, albums, manuscripts, scrapbooks, collections and other primary materials. You won't find many books or single items here, but lots of collections of material, small to large archives, photo albums, and the like. Often they depict historic events, other times personal stories. The subjects are varied, but the material consistently fascinating. We will now take a look inside a few of these collections.

We begin with one of several World War II photo albums from an American soldier. Soldiers who took their cameras to war must have been the exception, but a few did. This soldier came from Cheyenne, Wyoming, and served in the 442nd Infantry. According to the book Patriots Under Fire, this was "the most decorated unit in U.S. military history." There is one surprising fact about this soldier and his unit. The soldier was a Japanese American, as was almost every soldier in the unit. Of course, this is surprising as so many Japanese Americans were herded off to internment camps during the war, the government questioning their loyalty. Those were mostly residents of the west coast, so Richard B. Ohasi's Wyoming residence may have saved him. There are 152 photographs, taken in Italy. Most of the photographs feature some of Ohasi's Japanese-American comrades. They don't depict war scenes, except for one destroyed German tank, but various camp scenes. There are also some post-war family pictures and several service medals and ribbons. Ohasi died just last year at the age of 90. Item 40. Priced at $5,500.

Cassidy has a couple of albums of portrait photographs and item 15 is one. You would not want to be included in this photo album. It is a collection of mugshots from 1928-1934 carried by a railroad policeman around Council Bluffs. Most of the 38 photographs are classic mugshots, one straight on and one profile. All but one of the criminals are men. They cover mostly railroad related crimes, such as boxcar or Pullman theft, safe crackers, and depot burglars, but also murderers and mail fraudsters. Most are from Iowa, with Nebraska and Missouri also represented. Some have great nicknames, like Titanic Blackie, Go About Riley, B & O Shorty, and Gold Tooth Kelley. They are mostly a sad looking lot, but being a criminal during the Depression signaled doubly hard times. $1,500.

Next we have about as thorough an archive of, if not someone's complete life, then of their career, which lasted roughly half a century. To give an idea of its thoroughness, it is 40 linear feet in length. Diane Wolkstein wrote two dozen books, mostly folk tales. However, it was not so much her writing as her speaking that made her a popular figure in New York City. She was a storyteller. She held the title of Official Storyteller of New York, which required going to two parks a day, five days a week. Even after leaving that job, she continued participating in the Saturday morning storytelling in Central Park for 50 years. Ms. Wolkstein traveled to Asia and Africa, picking up material for the stories that made her a children's favorite. For 12 years, she also hosted a radio show in New York entitled Stories From Many Lands. Ms. Wolkstein died in 2013. This archive covers both the creative and business aspects of her career. Along with manuscript and printed material it contains hundreds of hours of audio and video records of her performances. Item 1. $37,500.

Here is a personal record of a very different sort. It is a notebook from a young man, a teenager, from Berkeley, California, from 1943-1947. In it, he recounts his dating history with various young ladies, including their names and contact information. You can try reaching them, but I wouldn't get my hopes too high. He describes their activities, like movies, dinner, parties, rates the ladies with such comments as "enjoyable," "alright," "likes to talk," and "no comment." He has a special relationship with a Marilyn, but in time it wears thin. At one point, he says if they were older, they would be engaged, but later, "Undoubtedly she'd have enjoyed herself more with a trained dog – which I'm not!" Eventually, he notes that "At long last the embers have turned black!" He finally concludes by saying "I close with the realization that my search is not yet over. And so I look forward to new faces and new loves." We do not know whether the young philosopher ever found the love of his life, or Marilyn her trained dog. Item 17. $975.

Now, we finally have some books – 24 of them. This is not great literature. Rather, it was constructed to a rigid format. Each books is 184 pages in length, has a two-word title, and is gay-themed pornography. They came from Surrey Ltd. or Surey, or Suree, they seemed to have a little trouble remembering their name. They were published during the 1970's. Titles include such classics as Hunky Roommates, Trucker's Tail, School Meat, Lusty Lifeguard, Farm Boy, Towel Boy, Dick Docs, Trucker Comin, and Hung Peter. Item 19. $900.

Item 31 is an album of 55 photographs of the 1938 New England Hurricane, or the Great New England Hurricane. They didn't have human names back then. It was the most damaging hurricane ever to strike New England and Long Island. It had reached category 5 status, and was still a 3 when it struck Long Island, very unusual for that far north. Over 600 people died, 57,000 homes were damaged or destroyed, and there were hundreds of millions of dollars in damage, back when a million dollars was serious money. These photographs were taken along the Connecticut River Valley from Windsor Locks, Connecticut, to Springfield, Massachusetts. $450.