A Catalogue of Lewis Carroll from Peter Harrington 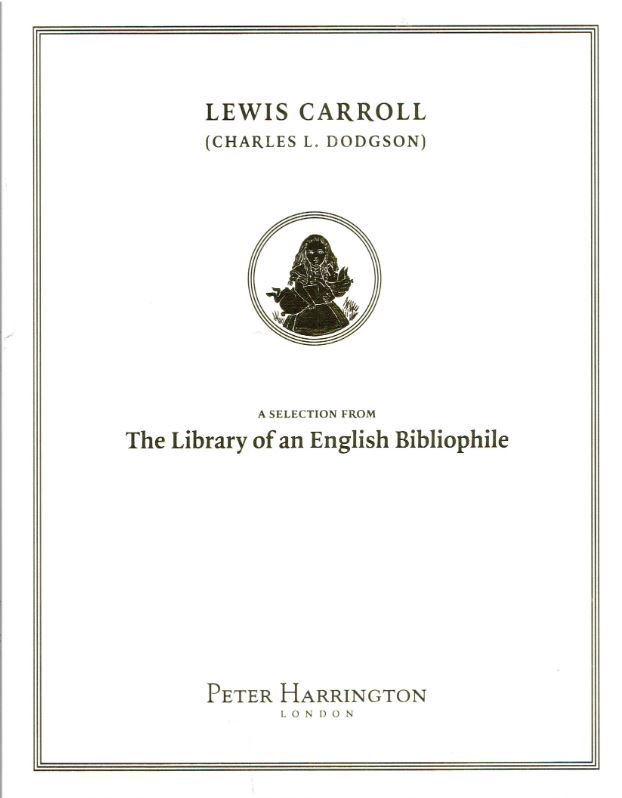 Peter Harrington has published a catalogue of Lewis Carroll (Charles L. Dodgson). A Selection from the Library of an English Bibliophile. Charles Lutwidge Dodgson was an unassuming mathematician and logician with a stammer, a deacon in the Anglican church, and a photographer. However, he had a way with entertaining children with stories and games he devised. One such story was made up to entertain the young daughter of friends, Alice Liddell. One day, Alice insisted he write down the story. Dodgson had already published some poetry under the name Lewis Carroll, but the Lewis Carroll generations have come to revere was born with the stories of a fictional girl named "Alice" and her amazing adventures. Dodgson wrote some mathematical and logic books under his own name, but the fantasy and children's works were all under the name "Carroll." To a large extent, he hid the Carroll identity from the mathematical world, fearing it would diminish his serious reputation.

Carroll was a real stickler when it came to quality. Perhaps his mathematical mind led him to insist on perfection. Even before the publication of the book which made his a household name, Alice's Adventures in Wonderland, he was dissatisfied with the first print run. Actually, it was illustrator John Tenniel who was most dissatisfied, but that was enough to lead Carroll to insist on its reprinting. The result is that the first printing is so rare as to make it virtually unobtainable. Instead, a second edition (though first published) was printed in 1866. Item 1 is a copy of this second, but first published edition. Priced at £57,500 (British pounds, or approximately $83,039 in U.S. dollars).

Nevertheless, Carroll wasn't wasteful. Multiple times he would agree to a way of using what he considered inferior printing jobs without throwing the pages away. They would simply be sent off to America to be used in American editions. Carroll believed that Americans, unlike his own nationals, were more concerned about price than quality. The outcome was that the pages from the suppressed first edition were bound with a new title page and issued from New York. Item 2 is a copy of what is therefore a second issue of the first edition, published later in 1866 than the second edition, though all but the title page were printed in 1865. Ironically, this edition of Alice's Adventures in Wonderland, with its inferior pages, comes in a decorated and bejeweled morocco case from the 1920's by fine binders Sangorski & Sutcliffe. £27,500 (US $39,743).

Alice's Adventures in Wonderland has been popular since the day it was published, never out of print. Item 4 is a sixth edition from 1877, the "fifty-fifth thousand." This copy was inscribed "from the Author," Carroll's most common way of describing himself (perhaps thereby removing the Carroll/Dodgson issue) on November 28, 1891. The recipient was Rhoda Liddell, Alice's younger sister. Carroll was friendly with the Liddell family, and had created the forerunner of his story for their daughter Alice, but Rhoda was seven years younger than Alice, too young to be involved with his stories at the time. By 1863, when she was just four, Carroll had a falling out with the Liddell family. They reconciled, but drifted apart. So this connection many years later, when Rhoda was 31, is interesting. A letter from Carroll to Mrs. Liddell nine days prior to this inscription invites her two youngest daughters, Rhoda and the still younger Violet, to visit him. Carroll says he has lots of photos they may like to see, and that since he is now 60 years of age and his romantic sentiments gone, it's all quite safe. Presumably, Rhoda and possibly Violet responded positively to that invitation and met Carroll on November 28. £42,500 (US $61,317).

Item 10 is an unusually inscribed copy of the first French edition of Alice (1869), Aventures d'Alice au pays des merveilles. Carroll inscribed many books, notably to his "child friends," but usually he signed them "from the author." Only occasionally will you find him use his actual name, "Dodgson," or his pseudonym, "Carroll." That's why this copy is so unusual. He has used both. He also has done so in his typical playfully backwards way. He inscribes it, "'Lewis Carroll' alias Charles Lutwidge Dodgson. Christmas 1871." He has pretended his real name is the pseudonym. Carroll wished to separate his children's writer image (Carroll) from that of his mathematical scholar (Dodgson), so connecting the two is surprising. However, in keeping with his normal habit, Carroll has written the inscription in violet ink. £17,500 (US $25,255).

Item 45 is a collection of Carroll's comic poems, mostly part of earlier works, but with a few new ones. The title is Rhyme? And Reason? published in 1883. It contains 65 illustrations by Arthur B. Frost and 9 by Henry Holiday. However, the inscription in this copy is to "J. Tenniel, with sincere regards of the author. Dec. 7/83." John Tenniel was Carroll's first illustrator, the man who illustrated the two Alice books. When Carroll first approached Tenniel, he knew him through his work as a cartoonist for Punch magazine. Tenniel also was an occasional book illustrator at the time and consented. Carroll and Tenniel were never particularly close as friends, but obviously respected each other's work. Carroll attempted to get Tenniel to illustrate a third book after Looking Glass, but Tenniel declined, saying he had lost his touch for book illustration. He instead focused his work on Punch. Despite their no longer working together, Carroll had sufficient respect for Tenniel to continue sending him presentation copies of his new books. £17,500 (US $25,255).