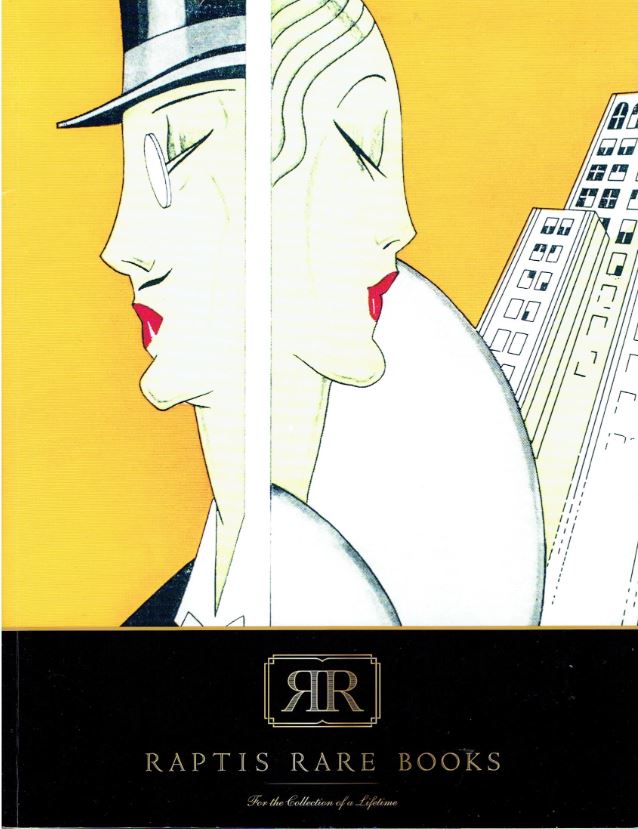 Raptis Rare Books has issued a Spring 2016 catalogue. They have described it as "from Darwin to Dalloway," but there are many works and authors not beginning with the letter "D." "Austen to Zhivago" might better express its depth. It covers a variety of topics, neatly divided into sections. Those headings are Classic Literature, Children's and Young Adults Literature, Science and Natural History, Travel and Exploration, Sports and Leisure, Economics, Photography, and History and Politics. Within each category, you will find important books and occasional ephemeral items. There is little of obscurity or unknown books and authors. This catalogue is intended for the finest collections. Let's take a look.

Tender Is The Night was F. Scott Fitzgerald's last completed novel. It is one of those pieces of fiction that is all too real. It tells of a psychiatrist and the beautiful but unstable mental patient who becomes his wife. She deteriorates mentally, while his life disintegrates with her. The parallels to Fitzgerald and his wife Zelda, who ended up institutionalized, are obvious. Two lives that burned so brightly for a brief time ended in madness and tragedy. Scott drank himself to death at the age in 44; Zelda died a few years later in a mental hospital. The year before he died, Scott inscribed this copy of Tender Is The Night to Harry Joe Brown. By this time, Fitzgerald was working in Hollywood, writing screenplays to make a living, a job he hated. He knew Brown from his role as an associate film producer. In his inscription, Fitzgerald humorously reveals his feelings toward the film industry: "To Harry Lee Brown – late of the 17th Infantry Brigade. Wounded in Hollywood. - from his fellow dough boy F Scott Fitzgerald Encino, 1939." Item 7340. Priced at $65,000.

Charles Dickens wrote lots of long books, but here is a very short offering from his pen. Item 5825 is a framed oval photograph of Dickens which he has signed, "Charles Dickens Washington, Seventh February 1868." He has added flourishes, both under his name and the location and date. That date is most interesting. On that day, he was in the Capitol to visit President Andrew Johnson. It was also Dickens' birthday (he was 56). In a letter to a friend describing that day, Dickens wrote, "...I have just seen the President: who had sent to me very courteously asking me to make my appointment. He is a man with a remarkable face." Johnson was not a beloved President, so perhaps the best Dickens could muster was that he had a "remarkable face." Dickens was on a tour of America at the time, doing readings that substantially supplemented his income. $48,000.

From the field of science and natural history, we have one of the most important, and most controversial books ever written. That would be On the Origin of Species by Means of Natural Selection... This is the first edition of 1859, which introduced the concept of evolution (an earlier paper coauthored by Alfred Russel Wallace had described the theory to some in the scientific community). All else being equal, Darwin would have been universally admired for his being able to put the evidence together to answer the question of from whence we came. However, all else was not equal, so while Darwin was admired by many in the scientific community, his contradiction of literal biblical history was condemned by many others, who to this day do not accept his teachings. As the American Philosophical Society noted, "As he himself expected, Darwin's theory became, and continues to be in some circles, the object of intense controversy." Nevertheless, every year, more evidence builds up to support his findings. Despite the controversy, it took only a day or two for this first edition to sell out. This is one of about 30 copies with an inscription from "the author" in a secretarial hand. Darwin did not sign any of these himself. The recipient was Dr. George Buist, Secretary of the Bombay Geographical Society. Item 7415. $350,000.

Early America produced its share of heroic biographies, but this may be the first American autobiography of a low-life thief. Henry Tufts had an amazing career, if he is to be believed, and since he lied about almost everything else in his life, one must tread with care. Still, few such thieves are also authors. Tufts' book is A Narrative of the Life, Adventures, Travels and Sufferings of Henry Tufts, published in 1807. His sufferings need no sympathy. They were self-inflicted, and Tufts had enough self-pity to cover any needs for sympathy. As a young man, he started by stealing fruits and vegetables, and soon worked his way up to paper currency, horses, and so on. He even stole his own father's horse and sold it. Along with theft, he participated in all sorts of frauds, even pretending to be a doctor. He was incarcerated dozens of times, escaped almost as many, and was once almost hung before being saved by a pardon. He was married several times without ever divorcing his first wife, to whom he returned on numerous occasions. He left 11 children with various mothers. According to Tufts, it was an untrue allegation of theft against him that forced his desertion of his family and to turn to a life of crime, but it was his already long criminal record that led to the accusation in the first place. At long last, now in his 50's, he returned to farming and lived out his life in honest pursuits. So he said. Item 5753. $5,500.

Long before John F. Kennedy was a political leader, the writer of Profiles in Courage, or even commanding a naval vessel during the war, he was a student at Harvard. It was there that he wrote a thesis that was so well received, he determined to publish it as a book. Of course, it didn't hurt that his father was ambassador to Britain, or that his family was enormously rich and powerful. Nevertheless, it was regarded as a thorough, analytical study of how England found itself in a difficult position vis-a-vis Germany as war was breaking out in 1939. Published in 1940, and a best seller at the time, the title is Why England Slept, a play on Churchill's book While England Slept. Kennedy did not place the blame on Chamberlain or his policy of appeasement, as so many have, but that would have been difficult, considering his ambassador father had supported the policy. Instead, Kennedy focuses more on the difficulties a democratic country faces in reacting – political squabbles and the like, along with a British sense that ultimately, things always turn out all right. A dictatorship, on the other hand, can act swiftly without having to satisfy any opponents. Item 5850 is a unique copy of Why England Slept. This is a specially bound Presentation Copy Rose F. Kennedy. Rose was John's mother, and the book is also dedicated to her and Kennedy's father. $40,000.