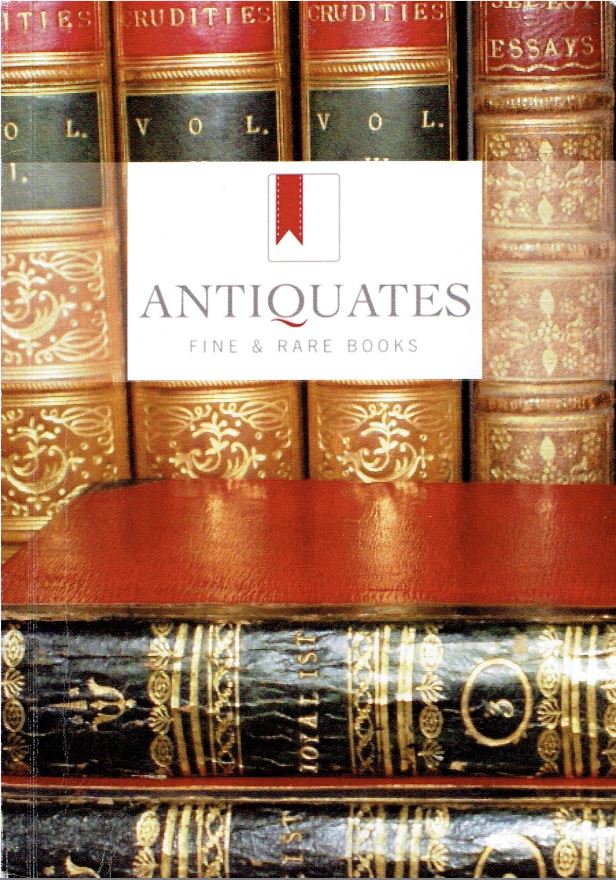 Antiquates Ltd. Fine & Rare Books has issued a catalogue of British Books and Owners. You just need those two names to understand what is offered herein. They are books written or owned by British authors and collectors, and as the bookseller's name implies, they are all very old. Some are older than others, but even the most recent material goes well back into the 19th century. With that brief, but complete description, we will plow ahead to a few examples of the material available.

We begin with a prayer book Americans will undoubtedly find touching. It is a short book of, A Form of Prayer to be used in all Churches, On Friday the 27th of February, 1778. That would have been all Anglican churches in England. Showing their deep concern for Americans, then in open rebellion against England, the service includes, A Prayer for our Enemies, which calls for giving "Grace...to our unhappy Fellow-subjects in America, that seeing and confessing the Error of their Ways, and having due Sense of their Ingratitude for the many Blessings of thy Providence, preserved to them by the indulgent Care and Protection of these Kingdoms, they may again return to their Duty, and make themselves worthy of thy Pardon and Forgiveness." Talk about damning with faint prayer! Another calls for divine support for King George III to "restore Tranquility among his unhappy deluded Subjects in America, now in Defiance of all Subordination and legal Government, in open Rebellion against his crown." These prayers went unanswered. Item 3. Priced at £1,250 (British pounds, or approximately $1,803 U.S. dollars).

King George would soon enough need prayers for his own well-being. Fortunately, he would recover from an unspecified illness, or so thought novelist and poet Samuel Jackson Pratt when he penned this Ode on his majesty's recovery; By the author of sympathy and humanity. Pratt avoids not only the nature of the King's illness, but the political maneuverings going on behind the scenes. George was suffering from mental illness, with extreme manifestations in 1788, the year before the publication of this ode to his recovery. In the background, parliament debated over a regency and the power that regent, the Prince of Wales and future George IV, would have. However, as Pratt celebrates, George III recovered before a regency was required. He would rule despite mental issues for the next 20 years, but in 1810, and for the last ten years of his life, his son took over as regent as George III drifted further into insanity and dementia. Item 72. £1,000 (US $1,443).

Here is another British George, and one who did much praying himself. A contemporary of George III, George Gregory was an Anglican clergyman as well as a writer. In 1885, he published Essays Historical and Moral, a collection of essays covering such subjects as "language, superstition, female education, republicanism, and suicide." However, his best known essay pertained to slavery and the slave trade. As a clerk for a Liverpool merchant while a young man, he would have been familiar with the realities of the trade. His essay has sections on "Of the Justice and Humanity of the Slave Trade," and "Of the Good Policy of the Slave Trade." Antiquates notes that those essays are "perhaps unwisely titled," because although Gregory displayed some critical cultural judgments toward the Africans, as typical for his time, he was actually sympathetic to the slaves and an abolitionist. He states that "slavery is directly contrary to the obvious principles of justice and humanity." Item 40. £500 (US $721).

If there was ever a tragic literary family, it must be the Brontes. After two older sisters and their mother died when they were young, sisters Charlotte, Emily and Anne became very close, taking to writing stories together. In 1846, they managed to get a book of poetry published. As women writers were not well accepted at the time, they used a vague pseudonym as the author, Currer, Ellis, and Acton Bell. In 1846, their book was published under the simple title Poems. It was a monumental flop. About 39 copies were distributed, but as few as two may actually have been sold. However, the following year, Charlotte published her first novel, Jane Eyre. An Autobiography. Edited by Currer Bell. This one was a smashing success, creating a sudden demand for more works from "Currer Bell." The unsold copies were given a new title page and republished in 1848 (though the title page still says 1846). Item 20 is a copy of this second issue of Poems. Sadly for this tragic family, Anne and Emily as well as their only brother died between 1848 and 1849, leaving Charlotte the sole survivor. She too succumbed a few years later in 1855. £1,750 (US $2,525).

Item 32 is what was effectively the first edition in English of the massive, groundbreaking French Encyclopedie of Denis Diderot and Denis D'Alembert. The Encyclopedie was, as one might expect of an Encyclopedia, a compilation of everything under the sun, and yet it was still more. It was the voice of the Enlightenment, expounding on very liberal philosophies for its time, such as tolerance, freedom, and democracy. An abortive attempt had been made to translate the entire text to English earlier, but only a small portion was completed. This, then, was the first completed publication, though it was hardly intended to translate it all. Rather, this edition is titled Select essays from the encyclopedy, being the most curious, entertaining, and instructive parts of that very extensive work... It was published in 1772, the year the final part of the French original was completed. This English version did not wow the reviewers, a contemporary writer in The London Magazine saying, "...the translation is lame, the spirit and elegance of the original totally evaporated." But, it is a first. £850 (US $1,226).