Archives and Manuscripts from the William Reese Company 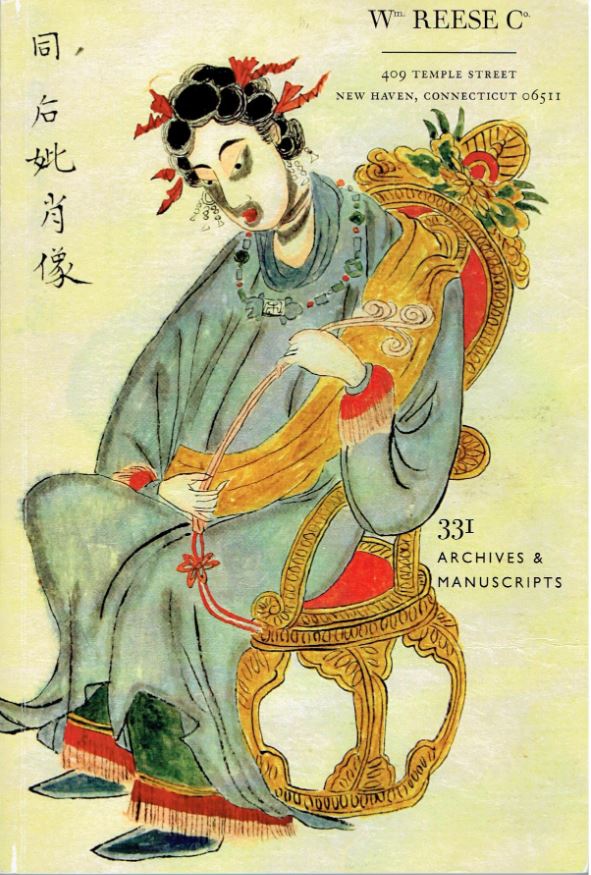 The William Reese Company has published a catalogue of Archives & Manuscripts. It contains hand-written material, from single documents to collections. Most, though not all, are American in origin. Chronologically, they range from a 1555 account of South America to a 1960 letter from Jacqueline Kennedy. However, most date from the period leading to the American Revolution through the 19th century. Much of what is described are historic events, some from notable participants, others from ordinary people, such as several archives of letters from Civil War soldiers. Other items may be more mundane, but come from important people, such as George Washington's discussion of "she asses." Who knew he talked this way? Here are a few examples.

We begin with a letter that is amusing and surprising, a romantic writing from a man whose name is known to all Americans, but not for chivalry. Instead, he is one of America's most despised figures. It was a shame, because at the time he wrote this letter, Benedict Arnold was considered a great patriot. He had led American troops during its critical, though unexpected victory at Saratoga. Nevertheless, Arnold did have something of a reputation as a self-serving, devious man, and this letter can be seen either in that light, or the much nicer role as a hopeless romantic. On March 4, 1777, Arnold writes Lucy Knox, in whose home earlier in the year he met Miss Betsy De Blois. Arnold was smitten. Arnold had been widowed the previous year and was evidently lonely. He writes Mrs. Knox with a letter he requests she deliver to "the heavenly Miss Deblois," along with a trunk of gowns he has sent her. He then asks for a reply as to how she has reacted to his gift, noting he will be waiting with "fond anxiety, the glowing hopes, and chilling fears, that, alternately possess [me]." Today, Arnold would probably be arrested for this behavior, he being 36 years old, she but 16, but such February-November liaisons were more acceptable at that time. Arnold was rebuffed by Miss De Blois, the result being he married Peggy Shippen the following year, and perhaps young Betsy's rejection of Arnold's advances were of historic import as the Shippen family had strong loyalist sympathies, which may have encouraged Arnold's act of ultimate betrayal. Item 13. Priced at $15,000.

Next, we have Washington's letter regarding a "she ass." The General and future President writes, "Nor have I heard any thing more of the asses at Marlbro'," speaks of a "bitch puppy," and "Though in appearance quite unequal to the match, yet, like a true female, she was not to be terrified at the disproportionate size of her paramour..." Okay, the father of his country was writing about a female donkey, not human. Nevertheless, it should be pointed out that Washington was not the humorless, dour type that history has painted him, but a man with a sense of humor, unafraid to stretch the lines of propriety on occasion. This letter was written from Washington's farm in Mount Vernon in 1786, his time of retirement between commanding revolutionary soldiers and serving as President. Item 106. $35,000.

Reese offers two archives of letters from John Taylor Wood. These are most revealing family documents from the Civil War. Wood was a Confederate navy officer with family ties to both the Confederate President and an American president. There were terrible family divisions. Wood's devotion to the Confederate cause exceeded most – he was never reconstructed. Wood was both the grandson of American President Zachary Taylor and nephew of Confederate President Jefferson Davis. His mother, Anne Taylor Wood, was one daughter of Zachary Taylor, while Davis' first wife was another of Taylor's daughters (she died in 1835, just three months after marrying Davis, so what her views on the Civil War would have been are unknown). Zachary Taylor's son became a Confederate general, and both John Taylor Wood and his brother fought for the Confederacy, but their parents, Robert C. Wood, who was for a time Zachary's physician, and Anne Taylor Wood remained loyal to the Union. Robert C. Wood served in the Civil War as an officer/surgeon for the Union. To say family relations were strained would be an understatement.

Item 112 is an archive of 25 letters written by John Taylor Wood to his wife and mother from 1863-1865. The letters to his wife speak of his service during the war, actions being taken by the forces with which he served. He is regularly optimistic about the Confederate cause and unquestioningly certain of its justness. The most interesting letter is one sent to his mother in 1865. He seeks reconciliation, though remains unreservedly loyal to the rebellion that led to their estrangement. He also remains certain the Confederacy will win, though by 1865, the handwriting was on the wall, the war's outcome obvious to all but those with the thickest blinders. Speaking of the soon to end war, Wood writes, "My faith is unshaken in our final success in it... The war may last for years to come...but the result will be the same, our Independence." In actuality, it had but weeks to come, with the result defeat. Wood also writes his mother that he is convinced that if he could explain things more fully, she would change her views. Priced at $21,000.

The second archive consists of ten letters from Wood to his wife, written from April 6 – July 13, 1865. During this period, Wood traveled with his uncle, Jefferson Davis, as he tried to escape capture by northern soldiers and somehow keep the Confederacy alive. At first, after the fall of Richmond, but still in Virginia, he finds a home for Davis to set up quarters while they await word from Lee. Of, course, that news a few days later would be his surrender at Appomattox. Later, on the move again, he writes from North Carolina, "feeling gloomy & depressed," but still noting "Uncle is well and in good spirits." Yet, by April 20, after news of what he calls Lee's "armistice," if not total surrender is known, he still writes, "We are contending but for one thing, Independence and nothing else will satisfy me..." A few days later, the realization that the "armistice" is a total surrender, a "sad & gloomy" Wood still writes, "I never will consent to these terms & uncle never will..." Ultimately, Wood was captured with Davis, but with the assistance of a bribe, escaped and made his way to Cuba. From there, he moved on to Canada, and his last two letters come from Montreal in July. At this point, he is concerned with inaccurate stories about his escape damaging his reputation. Wood lived up to his claim that he would never accept the surrender. He sent for his wife and children to come to Canada, where he lived the remaining 40 years of his life, never to return to the Reunited States. Item 113. $22,500.

While "Uncle" is not a man with much of a reputation today, particularly outside of the South, the Confederacy's military leader, General Robert E. Lee, generally has a positive image, even if at the time many in the North thought him more akin to the previously mentioned General Arnold. Lee, too, served in the U.S. Army, a topographical engineer and surveyor. He visited Fort Snelling in Minnesota in July 1839, and likely other times too. On one such occasion, he used his drawing skill to sketch the inside of the fort. He undoubtedly made many drawings during his time as a topographical engineer, but virtually none of his work survives. This drawing is an exception, and it is signed "Fort Snelling Cpt. Lee." Item 64. $17,500.