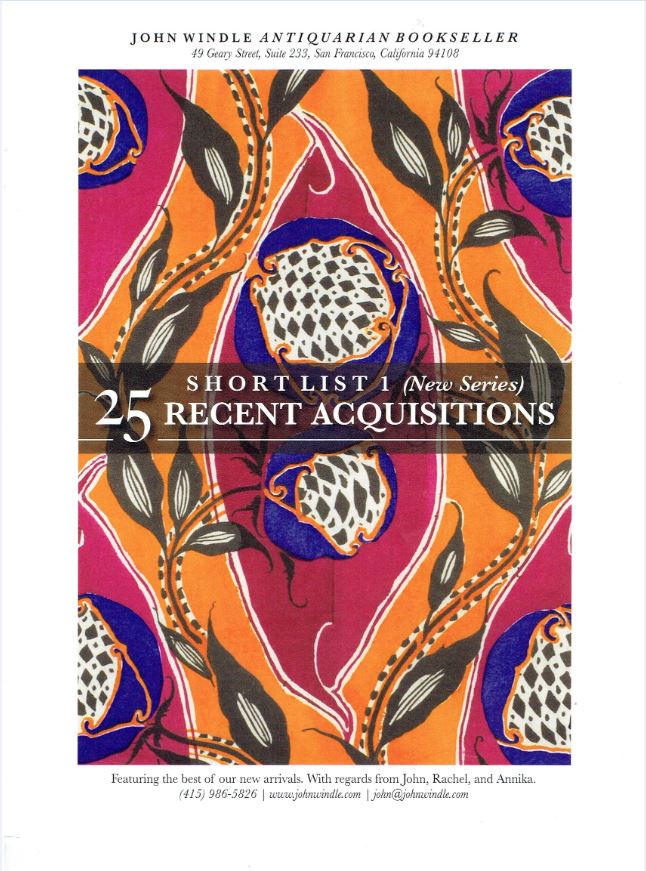 John Windle Antiquarian Bookseller has released Short List 1. 25 Recent Acquisitions. With just 25 items you might think it would be easy to peg this catalogue, but no such luck. The variety is still too wide to describe it beyond a varied collection of recent acquisitions. So, here are a few of them.

We begin with an obscure Latin text that has evidently been quite rare for a long time. The title is Christianissimi Francorum Regis, adversus Imperatorem Electum... published in 1528. The author was Gilbert Bayard, who served in the court of French King Francis I. It covers conflicts between Francis and Spanish King/Holy Roman Emperor Charles V. The two were constantly at odds throughout their reigns, with Francis in the difficult position of being surrounded by empires controlled by Charles. The rarity of this book can be seen by the accompanying letter from the noted early 19th century bibliophile Thomas Frognall Dibdin. Dibdin had evidently been loaned a copy and had previously been unfamiliar with the title. He writes in 1823, "I return to you your curious Latin tract with thanks for the perusal of it. The condition is quite piquante to a Bibliomaniac." Item 3. Priced at $1,750.

The next book carries a notable inscription and provenance. Item 18 is The Common School Journal for the Year 1842. Edited by Horace Mann. Mann is known as the "Father of the Common School Movement." It was he who instituted universal, free public education in his native Massachusetts, and promoted it to the rest of the nation. He also promoted the building of normal schools, whose role was to train the teachers needed to serve the schools. While most of his career would be spent in education, later serving as President of Antioch college, he also served a couple of terms in Congress, succeeding John Quincy Adams after the latter died. In Congress, he was a strong voice for abolition, and clashed with Massachusetts legend, Senator Daniel Webster, who sought compromise with the South. Mann's 1847 inscription in this copy is to "C. Sumner." That would be Charles Sumner, who would later serve 23 years in the Senate. At the time, Mann and Sumner were working together to promote public education in Massachusetts, and the two shared intensely anti-slavery views. Neither had yet been elected to public office, but each soon would be, first as Whigs, and then moving to the anti-slavery Free Soil party. This copy also contains the later signature of Mary Chapman, another strong abolitionist, leader of the Boston Female Anti-Slavery Society, an associate of abolition journalist William Lloyd Garrison, and friend of both Mann and Sumner. $4,500.

Item 4 is a biography of a very special lady, Memoires sur la vie de Mademoiselle de Lenclos, by Antoine Bret, published in 1751. Anne "Ninon" de l'Enclos entered a convent after he mother died. She left a year later. It definitely was not the place for her. Ninon de l'Enclos was a smart, witty, and beautiful lady. She became a very popular figure in Paris salons, including, soon enough, her own. She determined never to marry. Instead, she took on a series of lovers, serially as she never had more than one at a time. Not more than one at a time, but she had a great many over the course of her lifetime. She would replace them as she tired of them. Her lovers were regularly members of the highest society, but, she did not live off their riches. She became a writer and ably supported herself. Her views, not surprisingly, were those of a freethinker, and her disbelief in religion got her in trouble at times, even imprisoned for a while. Ninon achieved something of a legendary status in France, which explains this book which was published almost half a century after she died. $575.

This next book will tell us about the career and tricks of a very strange man: The Adventures of the Strange Man, Dr. H.S. Lynn: With a Supplement Showing how It's Done. Published in 1873, the book was written by its subject, H. S. Lynn. Or John Simmons. Or Washington Simmons. Or Washington Blythe. Or whatever else you may choose. John Simmons was apparently his birth name, and he used H. S. Lynn for this book, but he used many others in between. He was "Washington" when portraying himself as an American overseas, but he was actually from England. He toured America, Australia, Japan, and China, at a minimum, as well as his home country. Dr. Lynn, and he may or may not have earned a medical degree of sorts, was a magician. He may be overlooked today, but not in his time. Houdini credited him with being the inspiration for his own career. He started as a chemical conjurer, one who used chemistry and scientific advances to perform "magic," but soon turned to illusion. His most famous trick was to remove his limbs, even his head. Not really, but audiences thought he did. There is a photograph of Lynn/Simmons absent a head on his shoulders, but his head is neatly tucked under his arm. My own suspicion is that he has stuck his face under the arm of another, whose head is obscured by something matching the background behind it. I could be wrong, but I am confident he never actually removed his head during his performances. Item 17. $3,950.

Item 22 is a broadside, A List of the Names of the Provincials who were Killed and Wounded in the late Engagement with His Majesty's Troops at Concord, April 19, 1775. This is not the one issued contemporary with the start of the Revolution, but a reprint published while many of the veterans of that conflict were still alive. Among the names are that of a black soldier who fought despite the limited opportunities for freedom to his people, "Prince Easterbrooks a Negro man." The original printing of this broadside is a great rarity, while even this 1804 facsimile reprint is very scarce. $2,500.