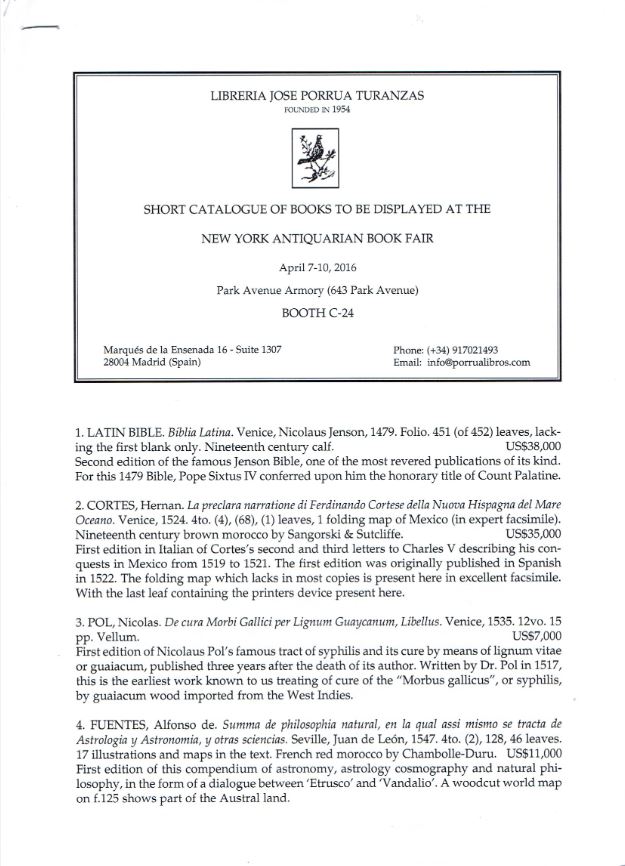 Books from the fair.

Libreria Jose Porrua Turanzas of Madrid, Spain, recently prepared a Short Catalogue of Books to be Displayed at the New York Antiquarian Book Fair. It is filled with very old books, ranging from the 15th century to early in the 19th. Naturally, many works are from Spain, but other European countries, England included, are represented. Also, there is little surprise that many items are related to the Americas, considering Spain's great involvement with the New World in those early days. This selection will appeal to collectors on both sides of the Atlantic. Here are a few samples.

We begin with an important book for the New World. It is the work of editor and cartographer Benedetto Bordone of Venice. The title is Isolario... (Islands), and it was designed to describe all of the known islands in the world, and what was known (or imagined) about them. One of those is a very large island called "Terra de Lavoratore." Today we know it as North America, and this provides the first printed map of the continent. There is also the first known European printed map of the island of Ciampagu. Today, this is known as Japan. Also contained in this book is the first printed account of Pizarro's conquest of Peru. The book includes numerous woodcut maps, including 12 pertaining to America. It was originally published in 1528. Offered is a fourth and "best" edition from 1547. Item 5. Priced at $19,500.

Next we have Hechos de don Garcia Hurtado de Mendoca, Marques de Canete, by Cristobal Suarez de Figueroa, a first edition, first issue published in 1616. This book provides an account of the discovery of the Salomon and Marquesas Islands. First, we need to provide an explanation. Garcia Hurtado de Mendoca was not the man who led the journey, but was Viceroy of Peru. However, he sponsored the expedition and the Marquesas Islands were named in honor of his wife. The mission leader was Alvaro de Mendana. It was not a pleasant journey, as most of the voyagers died either of disease or battles with islanders. Among the dead was Mendana himself. They had to abandon their attempted settlement. Those who returned did so thanks to the skills of navigator Pedro Fernandes de Queiros. Ten years later in 1605, Queiros would lead another mission to find what they missed the first time, Terra Australis Incognito, the mythical giant southern continent then believed to exist. He thought he succeeded, and some later thought that he had discovered Australia, but he actually only discovered Espiritu Santo, a large island in the New Hebrides (Vanuatu). Item 13. $35,000.

Speaking of islands, California is not one, but for years many people thought it was. Item 26 is Noticia de la California by Miguel Venegas, the first edition, published in 1757. It is the first printed history of California. That covered primarily Baja California. Venegas did not go to California himself. He corresponded with the Jesuits who were there trying to convert the Indians. One of the features discovered was the mouth of the Colorado River, still actively flowing to the sea in those days. It helped seal the conclusion that this was part of the continent, not an island. $15,500.

If there is an Audubon of flowers, it has to be Pierre-Joseph Redouté. His drawings of flowers were exceptional, but none of his other flowers compared with his roses. His drawings of roses were spectacular. His drawings were not interpretive, not something subject to artistic license. They were accurate, down to the last detail. The roses took care of the beauty themselves. With the level of exactness Redouté produced, his drawings were both scientific and artistic. The quality of his work was such as to make him an official artist for both Marie-Antoinette and later Empress Josephine. How he managed to escape the wrath of the French Revolution in between is unclear, but he was a survivor. Item 38 is the second (and "best") octavo edition of Les Roses, published in three volumes 1828-1829. $28,000.

We conclude with undoubtedly the best known Spanish literary work, El Ingenioso Hidalgo Don Quixote de la Mancha. Miquel de Cervantes' masterpiece has been published countless times and in just about every imaginable language. Item 30 is a special edition of Don Quixote. Published in four folio volumes in 1780, this is the celebrated illustrated edition. It contains 31 full-page engraved plates, 14 ornamental capital letters, and a double-page map showing Don Quixote's wanderings. It was published by Joaquin Ibarra for the Academy with royal patronage. Parrua Turanzas describes it as, "...the finest edition of the world's most famous and most often published novel." $64,000.