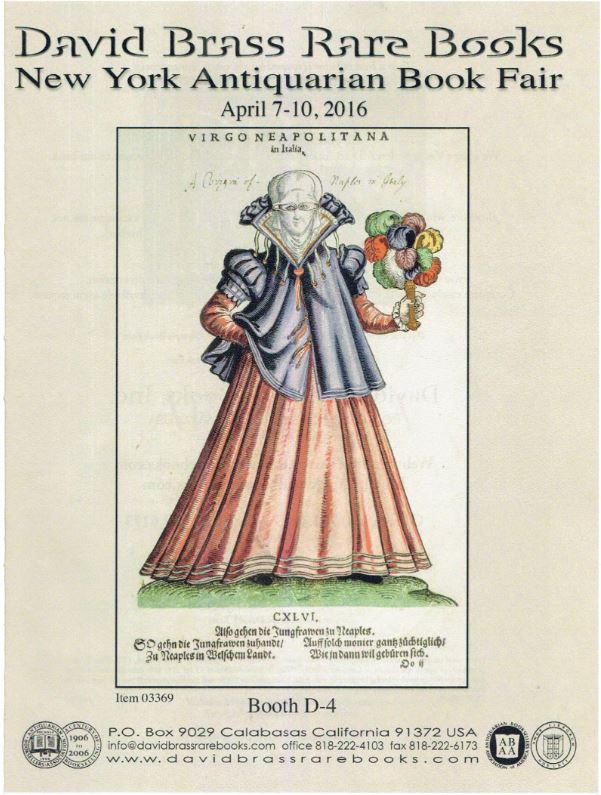 Books for the fair.

David Brass Rare Books prepared a catalogue for the recent New York Antiquarian Book Fair. It is divided into sections – Africana, Children's and Illustrated Books, Color-Plate and Caricature, Fine Bindings, Literature, and Original Artwork. While no dates are specified, and some items go as far back as the 16th century, the great concentration is in 19th century works. As for location, again no specifications, but expect a great deal of material to come from British authors and artists. Here are a few of the items we found in this fair catalogue.

Kate Greenaway was, and still is, the best known children's book illustrator of the 19th century. Her drawings of girls and boys were beloved creations at the time. The fashions in which she clothed her children became the inspiration of clothes in which many mothers dressed their children. Brass is offering four editions of Kate Greenaway's Almanac, for the years 1889, 1892, 1893, and 1895. Each is inscribed by Greenaway to her close friend, Lady Dorothy Nevill. Though a scandal as a young woman damaged Nevill's reputation, she soon married an older and wealthy man and settled into a prosperous life. She was a writer, hostess, and horticulturalist. She grew fine orchids and supplied some to her friend, Charles Darwin, who wrote a book on orchids. Greenaway, 20 years younger, would become part of Lady Nevill's circle of friends. Not only has Greenaway inscribed these almanacs, but has drawn an original watercolor of one her children on the half-title of each. They are priced at $3,500 each, except $4,500 for 1892.

Next up is another inscribed book from a children's author, a connection that leads back to the beginning of his most famous tale. The book is Peter Pan in Kensington Gardens, a 1906 first edition, first impression of J. M. Barrie's classic book, with 49 tipped-in color plates. Barrie and his wife, who lived in Kensington Gardens, had no children, but Barrie was, like the protagonist in his story, something of a child at heart. One day in 1897 while out walking, he met two young children, George and Jack Davies, who were out with their nanny, Mary Hodgson, and baby brother, Peter. Barrie had a way with children, entertaining them by wiggling his ears, and later with stories. He made up one about their baby brother Peter, how he could fly. In time, the character would evolve into Peter Pan. This copy was inscribed to Mary Hodgson in 1907. Both of the children's parents died by 1910, and Barrie became their guardian while Hodgson continued as their caretaker. $30,000.

This next item is a color-plate book from sporting artist Henry Alken: Sporting Discoveries, or the Miseries of Hunting in a series of seven plates, being hints to young sportsmen by Ben Tally-Ho. It was published in 1816. Alken was an artist whose specialties were sports and caricatures. Add to that he had a great sense of humor. Sporting events are a great source for mishaps. He had a particular penchant for sporting events that placed humans on the backs of horses. There were always disasters that could be depicted when horse and/or rider lost their balance. These illustrations, like so many Alken drew, were good for a knowing laugh. $9,500.

Here is a tale of bridge building under some difficult circumstances: The Man-Eaters of Tsavo and Other East African Adventures by Lieutenant-Colonel J. H. Patterson, published in 1907. John Henry Patterson was sent to what is today Kenya to oversee the construction of a bridge on behalf of the Uganda Railway. As the title hints, he ran into some unexpected problems. Lions usually don't bother people if people don't bother them, but at the site of the bridge, two rogue lions roamed with most unpleasant habits. They ate humans. There are theories as to why these two picked on humans, possibly the number of corpses in the area as a result of the local slave trade, but whatever the cause, they picked off both railway workers and townspeople. There were at least a couple dozen workers killed, and countless townsfolk. It took Patterson months, but he was finally able to pick off the two, peace was restored, and the bridge completed. Patterson, though himself a Christian, was a devoted Zionist who led the Jewish Legion, foreign Jews who fought on behalf of Britain during the First World War. $1,250.

This is a rare item for Tarzan collectors – the true first Canadian edition of Tarzan of the Apes, a first printing in the first state binding, published in 1914. There aren't many Canadian Tarzans around. Perhaps a half-naked man swinging around trees in a tropical jungle was not someone with whom people raised in ice and snow could relate. Fortunately for Edgar Rice Burroughs, he did not need to rely on Canadian royalties to survive. $8,500.