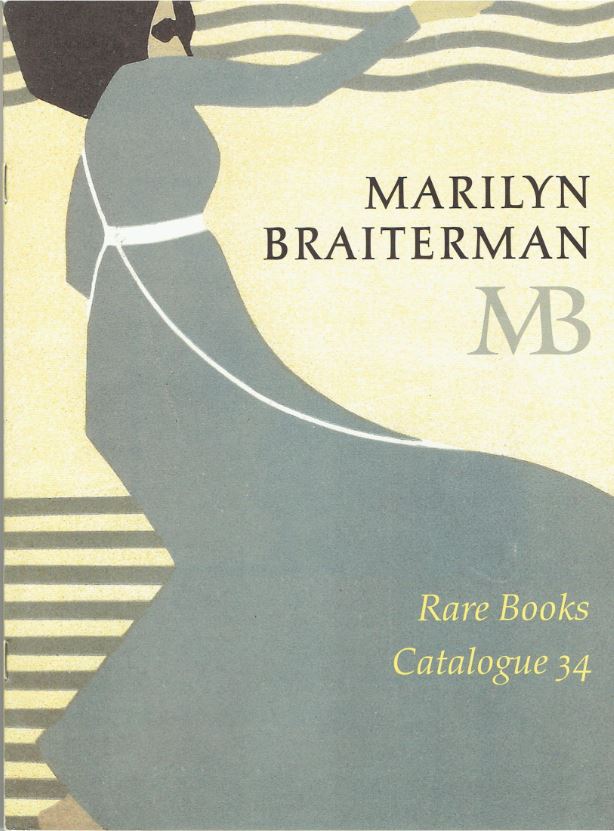 Marilyn Braiterman Rare Books is offering their Catalogue 34, a selection of books and related items with an artistic bent to them. In some cases they are the work of artists. Others are beautiful books, while still others are pieces such as advertising brochures that make use of artistic representations. Art helps sell products, or at least we would assume that from the use of an art deco gas pump to help sell motor oil. The French can find beauty anywhere. Here are some samples of these items.

We begin with an artistic presentation of some earlier art, much earlier. Item 5 is Frijoles Canyon Pictographs. Recorded in Woodcuts and Hand Printed... The artist and writer of this 1939 artist's book was Gustave Baumann. Baumann was born in Germany, moved to America at the age of 10, and approaching age 40, he made his way to the American Southwest. Baumann settled in Santa Fe, where he remained the rest of his life. One of the subjects of his art was the pictographs and petroglyphs created by ancient Indians of New Mexico (petroglyphs are carvings in rock, while pictographs are rock paintings using some form of pigment). Frijoles Canyon, in Bandalier National Monument, is the location of many ancient ruins, some decorated by Indian art. To what extent their drawings were art versus text is unknown. The ancient Indians had no written language, and what messages they wished to convey through their art can only be speculated upon. They lived in the area roughly from the years 1000 – 1500. Five hundred copies of this work were created. Priced at $2,000.

Not much was known about Japan in the outside world in the 17th century. There were few visitors, but the Dutch did have a leg up. The Dutch were important in world trade, and their map making and literary skills helped to cement their leadership. They were most significant in Asia, where the Dutch East India Company in effect became a major colonial power. It was the company's contacts with Japan that enabled Arnoldus Montanus to produce this extensive description of the land, Atlas Japannensis: Being Remarkable Addresses by way of Embassy from the East-India Company of the United Provinces, to the Emperor of Japan... Item 41 is a 1670 London first English edition, the year following the first, published in Amsterdam. The book is filled with information about Japan, including its customs, descriptions of its people, and views of its cities and scenery. Montanus was not a first-hand observer. He used some previously published material and, more importantly, East India Company records, and reportedly, four unpublished manuscripts produced by company employees. He also obtained some original drawings made in Japan, which enabled Montanus to richly illustrate his book. $18,500.

In the years after the Second World War, French automobile manufacturer Renault was famous for smaller, budget conscious cars. However, before the war, they produced some luxury automobiles under the "Stella" moniker. Item 94 is a brochure for their luxury Stellas from 1933. It contains color images of the cars, black and white photos of the factory, and pictures of beautiful people engaged in rich people pastimes. It is hard not to be smitten by these beautiful, classic automobiles. $1,200.

London has been a center for the theater at least since Shakespeare's time. While in some places the theater was long considered something of a shady place, not for respectable people, London theaters were fine institutions. Item 11 provides a look at some of those notable locations as of 1826, Historical and Descriptive Accounts of the Theatres of London, Illustrated with a View of Each Theatre... Descriptions were provided by Edward Wedlake Brayley, with 14 hand-colored plates "drawn and engraved by the late Daniel Havell." Presumably, he drew and engraved them before he became late. Among the theaters shown are Drury Lane, Covent Garden, Haymarket, and Sadler's Wells. $7,000.

For a look at more of London than its theaters, there is Select Views of London; with Historical and Descriptive Sketches of some of the most Interesting of its Public Buildings. This large, beautiful book was the work of John Buonarotti Papworth. Papworth was both an architect and an artist. He adopted the middle name "Buonarotti" as an adult, and if you are wondering where he came up with that, his friends described him as a second Michelangelo. Buonarotti was part of Micheangelo's complete name. This book contains 76 hand-colored aquatints of London scenes, including five folding panoramas. The book was published in 1816 by R. Ackermann, noted for the highest quality of printing in that day. Item 47. $8,000.