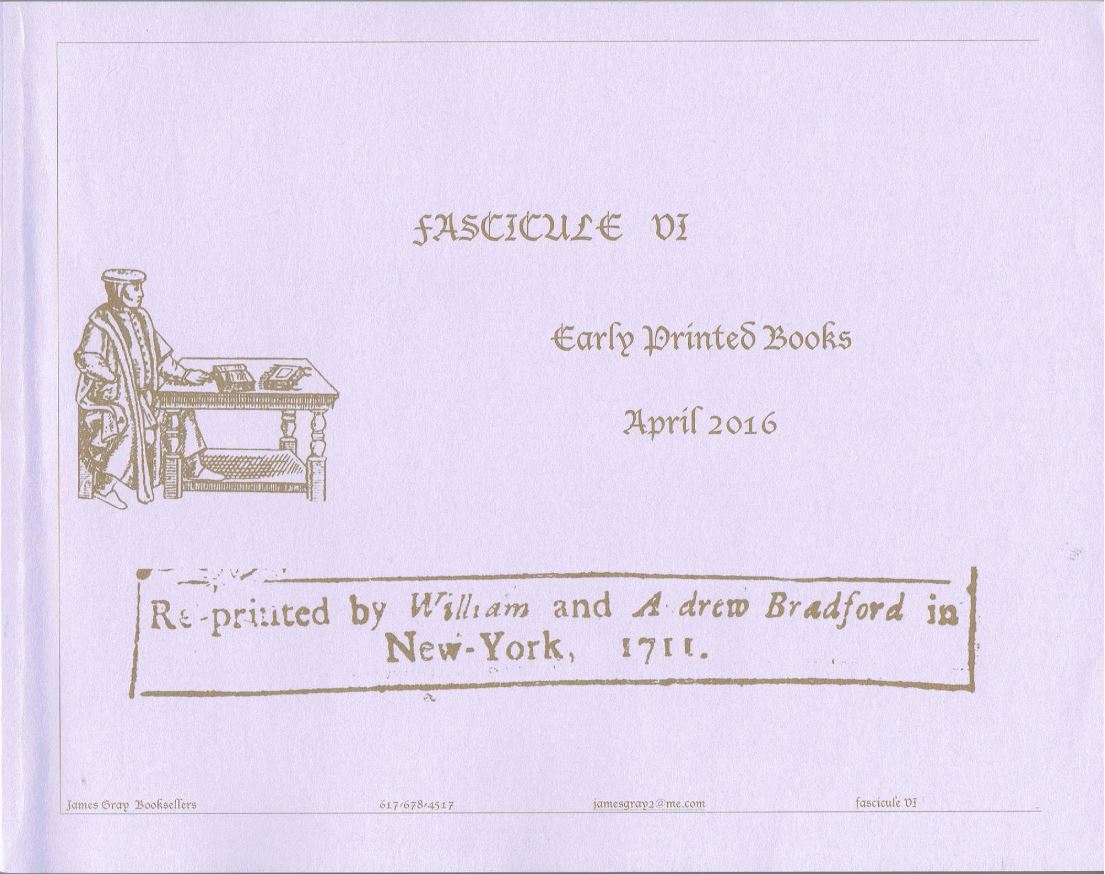 James Gray Booksellers has released their latest selection, Fascicule VI Early Printed Books. We will allow "early printed books" to stand as the best description of what is offered. Subjects vary. Just think of what people were writing about in the 17th and 18th century and you will have a good idea of what sort of material you are likely to find. We will provide a few samples of the early books to be found in James Gray's latest catalogue.

These days, the name "Mather" will most likely bring up thoughts of Cotton Mather and the Salem witch trials. It is unfortunate that this misstep is the their most remembered incident, as the Mather family was the source of the leading theological figures of colonial America. The line began with Cotton's grandfather, Richard Mather, who came to America in 1635. He was something of a rebellious soul, one a bit more open-minded than his illustrious son and grandson. He was a strong believer in congregational polity, a point of view at obvious odds with those of the Church of England, where central authority dominated. Mather believed that each congregation should choose its own fate, rather than be controlled by outside authority. He believed a community of churches was a good thing. They could look out for each other's welfare, provide guidance where one congregation had greater knowledge on a question, provide financial support for poor churches, even help each other resolve internal disputes. However, final decisions were to be made by each individual congregation, and advice and support could be rejected by that congregation if it so chose. Item 631G is Richard Mather's A Platform of Church Discipline, gathered out of the Word of God... reprinted by William Bradford (New York's first printer) in 1711, it having originally been prepared in 1649. Priced at $15,000.

This next book has a very long title, as was the wont of the day, but we will repeat it all as it displays a dilemma facing those who believed in science back in the 18th century: Miscellaneous discourses concerning the dissolution and changes of the world. Wherein the primitive chaos and creation, the general deluge, fountains, formed stones, sea-shells found in the earth, subterraneous trees, mountains, earthquakes, vulcanoes, the universal conflagration and future state, are largely discussed and examined. The "formed stones" of which author John Ray speaks are fossils. Ray was a notable scientist, a member of the Royal Society best known for his work on plant classification. The issue with which he was dealing when he wrote this book in 1692 was that of making the geologic records, fossils in particularly, consistent with biblical history, which he did not question. Unlike some of his contemporaries, Ray did believe that fossils were the remnants of once living animals, but he concluded they were the result of Divine intervention, the flood of Noah. Item 452G. $2,500.

Katherine Philips was one of the earliest if not the first female English poet to have her work published, though she was unhappy about it when it happened. Katherine was 16 years old when she married a man of some substance more than twice her age. She began writing poetry likely not that long after, but she only circulated it among friends. In her circle, she used the name "Orinda," which would lead to her being called "the Matchless Orinda" when her poetry was published after she died. Her poetry was quite proper. She wrote of love between women friends, but strictly of the platonic type. She avoided anything controversial, which enabled her poetry to be acceptable for public consumption. However, the only publication of her poetry during her lifetime was unauthorized, and incurred her displeasure. Item 717G is Poems. By the Incomparable Mrs. K. P., published in 1664. It was published and sold by a bookseller without her approval. Mrs. Philips said that she never intended for any of her poetry to be published, and the book was withdrawn, but the damage had been done. $8,000.

Mrs. Philips died in 1664, and after that, a friend gathered her poetry for publication. We will presume that this time she offered no objections. Item 718G is Poems By the most deservedly Admired Mrs. Katherine Philips The matchless Orinda. It also includes a French play she had translated, the only book on which she participated published with her permission during her lifetime. The authorized Poems was published in 1667. $5,800.

This is one of the first psychiatric books, though it is unlikely that author Robert Burton would have thought of it that way, or even known what that means. The title is The Anatomy of Melancholy What it is, With all kindes, causes, symptomes, prognostickes and severall cures of it. What Burton thought of as melancholy is what we would today call depression. Burton suffered from the condition himself, and so did many others, as can be testified by the great popularity of his book. Burton did not possess any great scientific knowledge, but tried to find ways to reduce the condition's effects. He believed that keeping busy helped to reduce the symptoms. Travel to places where melancholy is not much of a problem was also a good curative. Burton read everything he could find on the subject, providing numerous theories from others as well as his own. If his theories were not always correct, he gave it a great effort, and the popularity of his book evidences that it must have helped many readers. Item 319G is a fifth edition of over 70 published. This edition was published in 1638. $5,500.