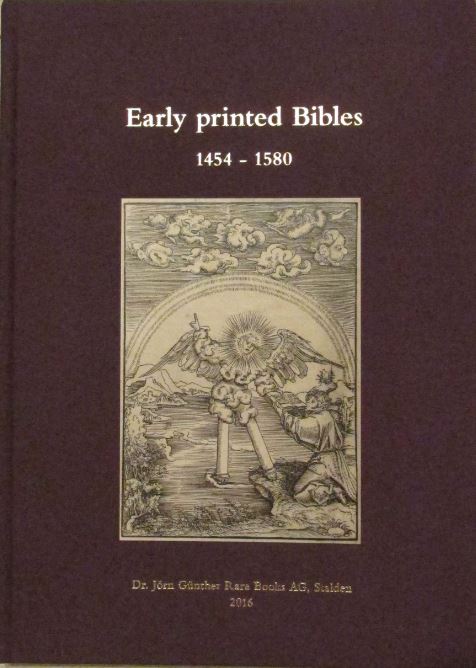 Dr. Jorn Gunther Rare Books has published a spectacular catalogue of Early Printed Bibles 1454-1580. We have seen few catalogues the peer of this large quarto, perfect bound hard cover issue. It offers 45 bibles and related items, each with a thorough history of the edition and numerous photographs. You can learn much about the first century plus of printed bibles from this catalogue.

The date range will quickly reveal where this catalogue begins. The starting date of 1454 means there is a Gutenberg inside, or at least a fragment thereof, complete issues long out of the market. Most of the bibles are German in origin, which should not be surprising, as starting with Gutenberg, that is where most early printed bibles arose. The Reformation brought revised translations, but again the center of activity was Luther's Germany. One more point needs to be made about early bibles. They were not plain text. The earliest employed such devices as rubricated initials to create works of art, with illustrations following not long after. These bibles are works of beauty as well as recountings of their readers' most fundamental beliefs.

We begin in the only place we can begin – with the Gutenberg. Johann Gutenberg mastered a craft that no one had been able to figure out before him. There were printed sheets from woodblocks, but no one had mastered a practical way to print large amounts of text. Gutenberg was aware of the use of pressing, be it wine presses or those used to create seals and stamps. What he added was movable type. This was not easy as the type had to be precisely cut and match up with other letters for perfect fit. However, once the arduous process of creating and placing the type was completed, the press could print large numbers of copies, something never done before. It is believed Gutenberg must have had a couple dozen employees working on his bibles. Over a course of two years, he succeeded in printing 180 copies. That may sound terribly inefficient today, but at the time it took a scribe three years to create just one copy of the bible. Sadly, Gutenberg's massive accomplishment was too expensive. He lost money, and unable to pay his debt to lender/partner Johann Fust, he lost his equipment too.

Of the original run of the first book ever printed, 48 copies of Gutenberg's bible are known to survive, only 20 complete. There are about 65 single leaves or fragments also still in existence. Offered is the largest consecutive fragment still held in private hands. It is the complete Book of Joshua, thirteen leaves. Following the death of Moses, it was Joshua's task to lead the children of Israel into the Promised Land, defeating the Canaanites and dividing the land among the twelve tribes. Item 1. Price on request.

With Gutenberg out of the picture, Fust teamed up with Gutenberg's assistant (and his future son-in-law) Peter Schoeffer to continue the business. On August 14, 1457, they produced the second printed book, Psalterium Moguntium. This psalter was the first book to carry a date, and the first to use three colors. While Gutenberg was limited to one book, both Fust and Schoeffer continued in the trade the remainder of their lives, 1466 in Fust's case, and into the 16th century for Schoffer. This psalter came in two issues, the second longer than the other. Item 2 consists of two leaves from the second issue. This book is even rarer than a Gutenberg bible, with only 11 surviving complete copies, and 26 fragments of one to three leaves. These leaves, and others, survived as a result of being used in the bindings of later books, it having been treated essentially as trash in the 17th century. Priced at €250,000 (euros, or approximately $282,925 U.S. dollars).

The next item is a bible in German, once thought of as the fourth German bible, but whose timing is now seen to be the third. It was published between 1474 and 1476, succeeding German editions of 1466 and 1470. It was published by Gunther Zainer in Augsburg. It closely follows the Latin Vulgate and it is said that Luther used it in preparing his own translation. This bible is particularly noted as being the first printed bible to include illustrations. The bible features 73 historiated woodcut initials, most featuring biblical scenes. They have been colored by an artist in Zainer's shop. Item 4. €330,000 (US $373,620).

Das Allte Testament deutsch is the first three parts of the Old Testament - the Five Books of Moses, historical books (Joshua-Esther), and poetical books, as translated by Martin Luther. These parts were published 1523-1524 (the following parts were published later). Luther had just finished translating the New Testament when he began work on this book. The illustrations came from the workshop of Lucas Cranach, who shared Luther's low esteem for the Catholic Church. The frontispiece shows its Christian orientation with a group of children and angels looking up at Christ on the cross. A different visual take on the bible can be seen in the first illustration, from Genesis, depicting the flood. Rather than showing Noah leading the animals, two by two, onto the arc, it shows just the top of a square arc, while lying nearby are the drowned bodies of humans and animals as rains pour down. This version is serious business. Item 20. €250,000 (US $ 282,925).