Legal Material Displayed at the Fair by the Lawbook Exchange 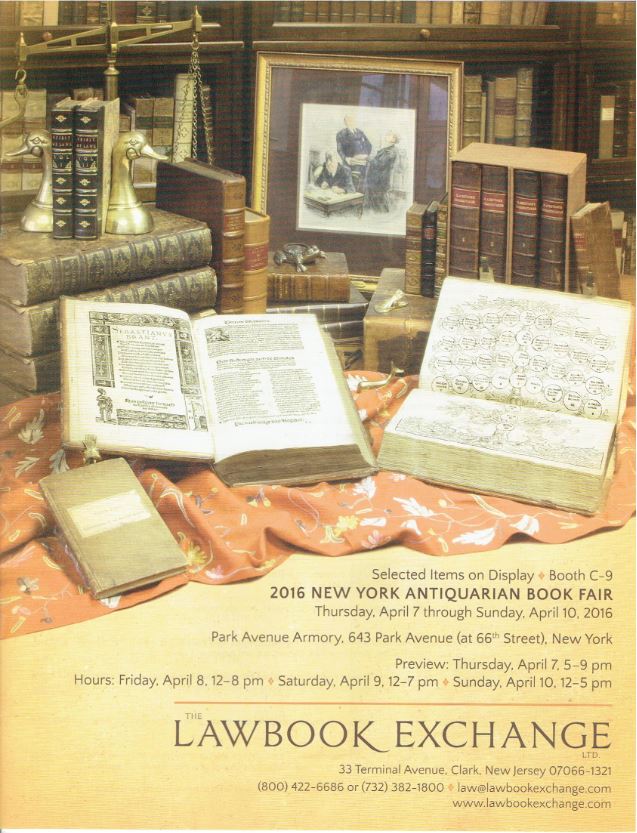 The Lawbook Exchange recently published a catalogue of items to be displayed at the 2016 New York Antiquarian Book Fair. We don't know how many were sold on the spot, but we will presume some of these are still available. Offered is a wide variety of subjects and dates, with the common thread being a connection to the law. Some items are books, but others are more ephemeral in nature, such as photographs and letters. If you collect the law, there is bound to be something here of interest.

Going back to the earliest days of English law, we begin with Tractatus de Legibus et Consuetudinibus Regni Anglie, by Ranulf de Glanville. This is a first edition, published in 1554, but the text is much older. Glanville was a 12th century justice who served as a close advisor to King Henry II. It was believed written around 1189, and certainly no later. Henry died that year, and his son, Richard I, threw Glanville out of office and imprisoned him until he paid a ransom. Glanville soon went off with the Crusades and died the following year. This first significant legal text was not one of case law, but rather, a guide to procedures in the English courts. It was highly respected and remained in use for centuries. Item 39. Priced at $12,500.

From the first we go to probably the most important English legal book ever written. Item 7 is the first American edition of Commentaries on the Laws of England, In Four Books. Reprinted From the British Copy, Page for Page with the Last Edition. This first American of what is commonly known as Blackstone's Commentaries was published in Philadelphia in 1771-1772, while America was still a part of England. Prior to Blackstone, English law consisted of centuries worth of scattered cases, unorganized and impossible to understand. What Blackstone did was to organize the case law, but then he did more than just copy it. He weaved the cases into a consistent whole, explaining the principles behind the cases. This was essential for those in the field to understand how it should apply to new cases with different facts than those from the past. Blackstone's book was the essential legal guide in America well into the 19th century, and it continues to be cited in court decisions to this day. $17,500.

Next we have another major legal treatise, but while this is the first English edition, the author was not an English subject. Rather, it was the work of Dutch jurist Hugo Grotius. Grotius' focus was international law, of which little was recognized when he lived during the 17th century. He laid down a theory of law based on the writings of ancient and contemporary scholars, natural law, and the rights of nations in consideration with the liberties of their peoples. Grotius was also noted as an advocate for freedom of the seas, something not generally recognized by all nations at the time. What Grotius did not consider applicable to international law was church law, which got his book posted to the index of banned books. Item 45 is The Illustrious Hugo Grotius: Of the Law of Warre and Peace. It was edited by Clement Barksdale and includes memorials to Grotius who died in 1645. This first English was published in 1655. $3,500.

Before we had "too big to fail" we had The Curse of Bigness. That is the title of Justice Louis Brandeis' 1935 book. Brandeis had been a crusader against large, monopolistic companies during the Progressive era of Theodore Roosevelt. Brandeis felt that not only should large monopolies be broken up if they abused their power, but that the trend toward bigness was counterproductive to the economy and welfare of the nation in general. The issue in his day was not so much what would happen if a large company on which much economic activity depended failed, but what happened when they were too successful, that is, successful in furthering their own aims at the expense of the nation. This copy of Brandeis' book has been signed boldly by him on the title page. Item 10. $950.

This case of a Rhode Island butcher who didn't want to accept paper money became an important precedent in American law. The Rhode Island legislature had passed a law requiring the acceptance of its paper currency. However, they went farther. They legislated that those accused of not accepting the currency would be tried before judges, denying their constitutional right to a jury. Furthermore, appeals of these courts' verdicts could not be made to the higher courts of the state. John Weeden was the butcher in The Case, Trevett Against Weeden. This 1787 publication was prepared by his attorney, James Varnum, a general during the Revolution and Rhode Island representative to the Continental Congress. Varnum argued that the law was an unconstitutional violation of Weeden's rights to a trial by jury and the court agreed. This case served as precedent for one of the most important U.S. Supreme Court cases, Marbury v. Madison, which established the judiciary's right to rule on the constitutionality of laws passed by the legislature. Item 98. $1,000.