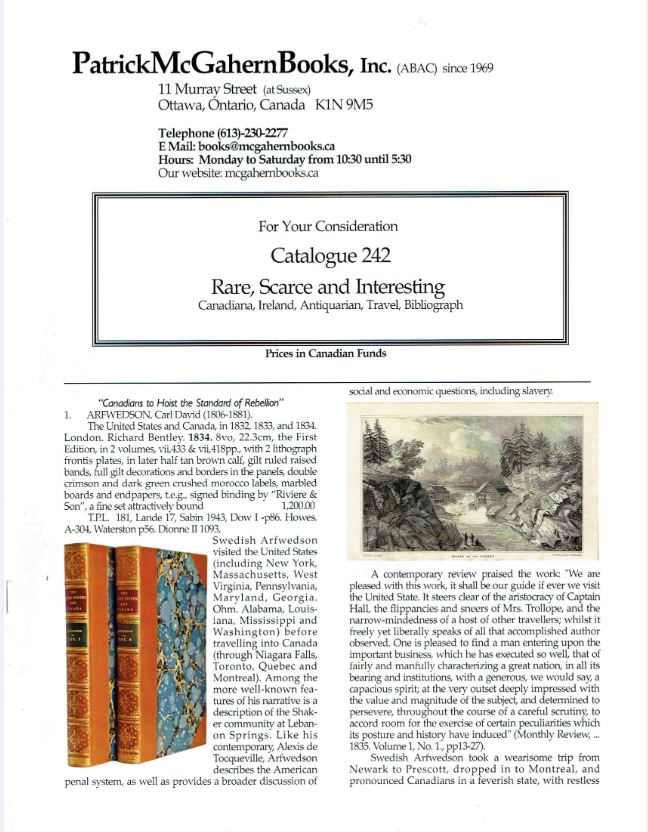 Patrick McGahern Books has issued a catalogue of Rare, Scarce and Interesting Canadiana, Ireland, Antiquarian, Travel, Bibliography, their Catalogue 242. There is certainly a wide selection of Canadiana, McGahern being located in Ottawa, but the other topics appear as well. Additionally, there are items that pertain to Canada's large neighbor to the south. There is much here collectors will enjoy, from the familiar to the obscure. Here are a few samples.

If you wanted to travel through America and Canada in the middle of the 19th century, this is the book you wanted: Appletons' Railroad and Steamboat Companion. Being a Travellers Guide through the United States of America, Canada... It specifies the northern, middle and eastern states, and specifically lists places like Niagara Falls, the White and Catskill Mountains, Saratoga and Virginia Springs. This was a railroad and steamboat guide, and when it was published in 1848, few railroads or steamboat lines went west of the Mississippi (except some steamboats on the Missouri). You visited the eastern half of the nation unless you had the courage to take a covered wagon out the Oregon Trail. The guide includes segments on the development of the railroads, then less than three decades old, and describes their routes, along with presenting numerous maps. Item 77. Priced at CN $350 (Canadian dollars, or approximately $272 U.S. dollars).

Here is a place where you still need to ride the rails if you wish to pay a visit. There are no highways to Churchill, Manitoba. Located on the west side of Hudson Bay in northern Manitoba, it is one very cold place, bitter through its long, dark winters, cool during its relatively brief summer. Item 36 is The Founding of Churchill. Being the Journal of Captain James Knight, Governor-in-Chief in Hudson Bay, from the 14th of July to the 13th of September, 1717. Knight's tale was edited by James F. Kenney and published in 1932. If you are wondering why Knight settled this distant, inhospitable place, it was to serve as a fort and trading post for the Hudson Bay Company. Europeans wanted fur, and some people were willing to put up with extreme conditions to fill the demand of those who lived in luxury far away. CN $125 (US $97).

The U.S. and Canada had many visitors from England in the early 19th century, some of whom wrote books. Not all were complimentary, to say the least, at least not about the United States. Captain Basil Hall recounts his visit in Travels in North America, in the Years 1827 and 1828. Published in 1829, Capt. Hall was surveying the U.S. and Canada to make recommendations to British emigrants. He did some extensive traveling in Canada and liked much of what he saw, particularly in Upper Canada (culturally British like himself). Hall was a bit upper crust and was not so impressed with the U.S. The Dictionary of National Biography writes, "His frank criticism of American customs excited the utmost indignation in the United States." Item 17. CN $900 (US $701).

Carl David Arfwedson visited America a few years later, and his impression was better, but then again, he was Swedish, not British, so perhaps he had less tendency to look down on country relatives with whom they had already engaged in two wars. Item 1 is Arfwedson's The United States and Canada, in 1832, 1833, and 1834. Like his French contemporary, de Toqueville, Arfwedson surveyed America's penal system, discussed its social and economic institutions, visited the Shaker community in Lebanon Springs, and crossed into Canada for further exploring. There he noted some unease and predicted principles of freedom emanating from the south would one day lead to rebellion. Three years later it happened, but the revolution was far weaker than the one in the U.S. and was quickly put down by the British. A contemporary reviewer in the Monthly Review spoke more favorable of his book, saying, "We are pleased with this work, it shall be our guide if ever we visit the United States. It steers clear of the aristocracy of Captain Hall, the flippancies and sneers of Mrs. Trollope, and the narrow-mindedness of a host of other travellers..." Mrs. Frances Trollope was another Britisher who looked down her nose at the unwashed rubes who populated the former colonies. CN $1,200 (US $936).

Once that rebellion of 1837 was put down, the British had to figure out what to do with some of those who participated. The answer was to get them out of their hair, or more precisely, ship them off to their penal colony in Australia. They transported 141 men there, nine of whom wrote books. This may be the rarest of them: Recollections of Life in Van Dieman's Land; By William Gates: One of the Canadian Patriots. It was published in 1850. Gates describes his time in Australia, which the prisoners did not much enjoy. Most, like Gates, were allowed to return home around 1845. Item 56. $10,000.