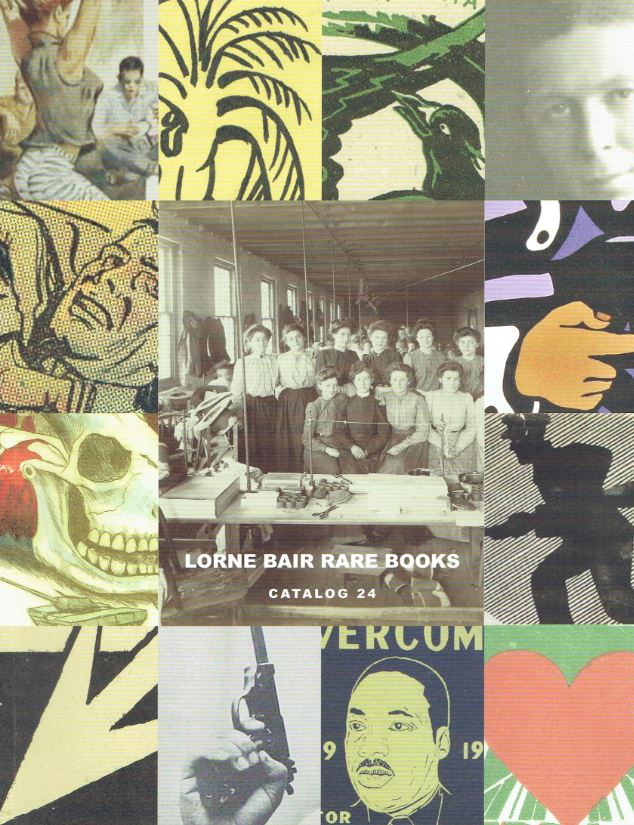 Lorne Bair Rare Books has issued their Catalog 24. Bair specializes in radical literature and related items, so that is most of what you will find. Overwhelmingly, it comes from the radical left, but they always add in a few items from the far right, and a couple of things that aren't really radical at all. That's enough about the exceptions. Here are some samples of the items mostly from the left, and many the far left.

We begin with an item that is painful to read because the issues are so similar to those of today. It's as if nothing has changed since it was published, circa 1969-1970. The title is Black Fury, Second Addition, edited by Mona Bazaar. It is a collection of essays, a followup to a similar collection issued in 1968. The issues concern police brutality, white racism, the Vietnam War, and the rise of the Black Panther Party. The same concerns arise today, except the wars are in the Middle East and the latest movement is Black Lives Matter. The publication focuses on the killing of Vivian Strong, an unarmed 14-year-old black girl shot by a white police officer in Omaha. You would think we could just deal with these issues already so such protests would no longer necessary. Item 4. Priced at $350.

The next item comes from a black leader and political activist, a journalist and first black columnist for the Chicago Tribune, as well as being one of the greatest orators of his day. Roscoe Conkling Simmons was a nephew of Booker T. Washington. His uncle got him a job as an office boy for Ohio Republican Senator Mark Hanna, a close associate of President McKinley. It led to Conkling's lifelong involvement with politics and the Republican Party. His outstanding oratorical skills made him influential on behalf of black concerns within the party. Conkling would even deliver a seconding speech on behalf of Herbert Hoover at the 1932 Republican convention. However, his influence within the black community waned as blacks, once mostly devoted to the party of Lincoln, switched sides with the onset of the Depression as a result of Roosevelt's programs to aid the poor. Conkling did not switch. Item 25 is Conkling's campaign booklet from 1936 supporting the presidential candidacy of Republican Alf Landon: The Republican Party and American Colored People. The cover depicts Landon, his running mate Frank Knox, and Abraham Lincoln. The pamphlet compares the records of the Democrats and Republicans going back to 1856, and while those comparisons would not have looked good for the Democrats, by 1936 times had changed. Landon did not carry the black or much of any other votes. $400.

Now we come to a far more radical activist, an anarchist who spent 14 years in prison for attempted murder. Item 33 is Alexander Berkman's account of those years: Prison Memoirs of an Anarchist, published in 1912 by Emma Goldman's Mother Earth Publishing. Berkman was close to Goldman, both politically and personally. Berkman had participated in the Homestead steelworkers strike. Andrew Carnegie sent Henry Clay Frick to Homestead to cut wages and break the strike. Berkman responded to Frick with a hail of gunfire. The latter survived, Berkman was sentenced to 22 years, but released after 14. Berkman would be deported to the Soviet Union during the First World War, become disillusioned with what was happening there, and end up moving to Germany and later France, where he died. $1,500.

Now for a word from the other side. Item 12 is a broadside headed Notice! To All White Citizens Greetings: Stop Buying Ford Cars and Trucks and other Ford Products. Was the problem Ford shipping jobs to Mexico? No, circa 1965 the White Citizens' Council of Greater New Orleans was unhappy that Ford was supporting racial integration. $650.

Here is a massive collection for a repeatedly attempted failed idea. For centuries, people have tried to come up with a universal language, a language everyone around the world could master so all people could communicate with each other. Despite the obvious logic, it has never succeeded. Item 43 is a collection of 118 items, 4.5 linear feet in length, offered jointly by Bair and fellow bookseller Garrett Scott. Most people have heard of the most familiar of these invented languages – Esperanto – but there have been many, many more. Bair notes that the collection includes "World English, Ro, America-Speak, Gestuno, Globalese, Ido, Interlingua, Volapuk, Magistri, Paralloidre, Lincos, Loglan, Isotype, Occidental, pasigraphy, shorthand, Paleneo, Nuwaubian, Prashad, Bordurian, Unilingua, Ithkuil, Kesh, Amtorian, Eldarin, Olingo, and others." These pieces date from 1774-2011. Bair notes that you are unlikely to ever find some of the pieces elsewhere, such as the handbill for a performance of Three Short Plays in Prashad. $25,000.

Do you remember the old movie Seven Brides for Seven Brothers? Here is a somewhat similar sounding title, Seven Wives and Seven Prisons; or, Experiences in the Life of a Matrimonial Monomaniac. A True Story. Written By Himself. It was published in 1870. This may not be politically radical, but it is something of a radical lifestyle. Bair informs us that the despite the "true story" in the title, it is a bit of a fictionalized autobiography from one L.A. Abbott. Evidently, the serial bigamist spent some time in prison. The book's frontispiece includes a portrait of "My First And Worst Wife." Item 90. $200.