Tales of the Old West from Arthur H. Clark 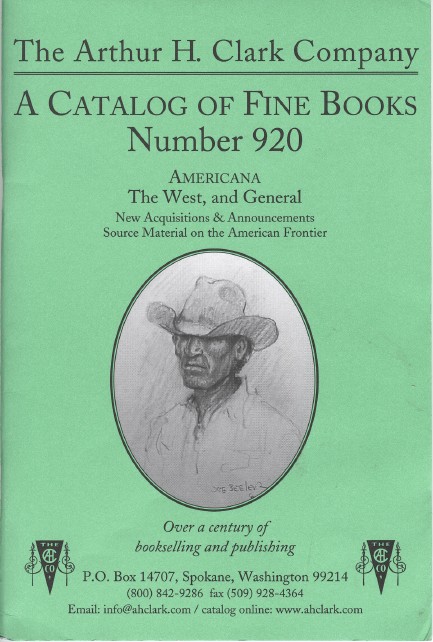 Arthur H. Clark's 920th catalogue of western and other books.

The Arthur H. Clark Company recently issued its catalogue #920 of Americana, the West and more. It is a collection of rare books recently acquired by the Old West specialist. Much of the material covers the more obscure incidents and personalities of this region. However, Clark's books aren't limited to the west, so you will find some other interesting works slipping into their catalogues.

There's no greater rags to riches, and riches to rags story of the Old West than that of the Tabors. H.A.W. (Horace) Tabor was a Vermonter who made his way to Colorado in 1859. For 19 years he made a reasonably good living mining part of the time, serving as postmaster, and running a store. A generous man, in 1878, he staked a couple of poor German shoemakers with mining equipment in return for a one-third interest in whatever they found. Find they did. A large vein of silver was soon producing $8,000 a week. Tabor bought out his partners, and in time acquired numerous mines around Leadville, Colorado. His wealth grew to the millions, while his generosity remained undiminished. He purchased a fire station and opera house for his town, and an opera house for Denver. He gave away money seemingly to anyone who asked, while living lavishly himself. When his wife rejected his luxurious lifestyle, he divorced her and married Elizabeth Doe, a vivacious young lady 25 years his junior, better known as "Baby Doe." They lived a life of wealth and luxury until 1893, when the government stopped purchasing silver for coinage. Overnight, the silver market collapsed, and with it, Tabor's wealth. He was forced to sell virtually everything they owned, even Baby's Doe's jewelry. Tabor, who had served as Lieutenant Governor, and even 30 days as a Colorado senator, was penniless. About all he was able to hold onto was the closed down Matchless Mine, the one he believed would one day reestablish his wealth.

Most people thought Baby Doe would abandon her now poor older husband, but she stood by her man. In 1898, friends arranged for Tabor to be appointed Postmaster of Denver, but a year later, he died without ever recovering his riches. Supposedly, his final advice to Baby Doe was "hang on to the Matchless," Tabor being convinced that it would again be worth millions when silver recovered. Baby Doe took his words to heart. She returned to Leadville, moved into a shack alongside the Matchless Mine, and remained there until her death in 1935. The mine never reopened and Baby Doe spent most of those last thirty-five years a reclusive pauper, living for a dream that never returned. Clark offers two books about the Tabors. Item 121 is Silver Dollar: The Story of the Tabors, by David Karsner, a 1945 edition of a book originally published in 1934. It recounts Horace Tabor's exciting, and ultimately tragic, life. Priced at $16.50. Item 129 is Silver Queen: the fabulous story of Baby Doe Tabor, by Caroline Bancroft, a thirteenth edition. It's a fascinating story. $9.50.