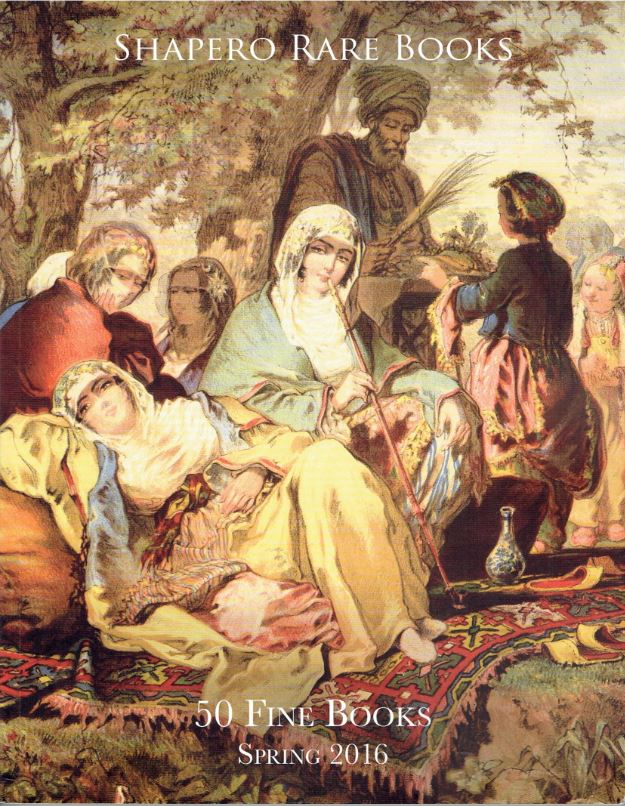 Shapero Rare Books has issued a catalogue of 50 Fine Books Spring 2016. Shapero regularly publishes selections of 50 important books, thick, fully illustrated catalogues designed to do justice to the quality of material offered. The type of books presented varies widely. They range from the earliest days of printing in the middle of the 15th century, to well into the 20th. There is history, art, literature, science, exploration, private press... just about anything of the highest quality. Here are a few of these exceptional items.

We begin with the oldest item, one of the first books ever to be printed. To be more precise, it was the fourth. It was the first with a named author, those preceding it being psalters and, of course, a bible. The author was Guillelmus Durandus (or Durandi), a 13th century Bishop of Meade. The title is Rationale Divinorum Officiorum, a treatise on the church, not just the liturgy but the history of the liturgy, buildings, offices, etc. However, it is not the book's subject that is of importance but its place in printing history. It was published on October 6, 1459, printed in Mainz, Germany, as had all books up to that time. The first book, naturally, was Gutenberg's Bible, but Gutenberg ran into serious financial difficulties. Johannes Fust, who had loaned Gutenberg money, sued for nonpayment. He was awarded Guternberg's press. Together with Gutenberg's assistant, Peter Schoeffer, he went into the printing business himself. They would be more successful, the partnership continuing until Fust's death in 1766, followed by Schoeffer, his son-in-law, continuing on his own. This book was printed in two distinct versions – one with printed red or blue initials, and the other with the space left blank for hand illuminated initials. This is one of ten copies of the latter, completed by Fust's master. That individual was also responsible for illuminating some of the later copies of Gutenberg's Bible. Only two other copies of this book are known to be in private hands, and only one of those is illuminated. Item 26. Priced at £525,000 (British pounds, or approximately $746,610 U.S. dollars).

Here is another book that was written before the invention of the press, but received a treatment similar to that of Durandus, though under very different circumstances. Fust and Schoeffer were printing spectacular editions because that was all anyone knew in 1459. By the time this next book was printed, the late 19th century, presses were pumping out large reams of cheap books, designed to be read and thrown away, not treasured for generations. William Morris, an artist at heart, was not happy with this. He determined to print small runs of special books by hand, recreating the process of the earliest printers. He created his Kelmscott Press in 1891, and it lasted only half a dozen years, closing down shortly after Morris died in 1896. Kelmscott to this day is admired as the finest of the private presses. Item 21 is Kelmscott's greatest of all works, The Works, by Geoffrey Chaucer, published in 1896. It is better known simply as the Kelmscott Chaucer. This book combined the exceptional printing skills of Morris with the artwork of his longtime friend and notable 19th century artist, Edward Burne-Jones. The latter provided 87 illustrations. It took them four years to complete the work, with Burne-Jones pushing ahead through long hours, fearful that Morris might not live long enough to complete the project. Morris barely made it, and Burne-Jones didn't do that much better, living only two more years. Their book will last indefinitely. £65,000 (US $92,552).

This next book is almost as old as the Durandus, but was written more than a millennium earlier. Item 33 is De antiquatate Judaica. De bello Judaica. It came just 15 years after Gutenberg's Bible, printed by Johann Schussler in Augsburg in 1470. The author of this first century book was Flavius Josephus, and it contains the history of the Jews up to that time. Josephus was a Jew who had visited Rome, but returned to Jerusalem in the year 66 on the eve of the Jewish revolt. He participated and was captured by the Romans, but was spared when he made a very wise prophesy. He predicted that Roman commander Vespasion would become emperor. That sounds like some quick thinking on Josephus' part, but it spared his life. It didn't save him from imprisonment, but when his prophesy came true three years later, he was freed, allowed to come to Rome, given a house, citizenship, and even a pension. Josephus became a Roman, but wrote the history of his birth people, particularly from Roman times but back to earliest times as well. Schussler's was the first printed edition of Josephus' works. £250,000 (US $356,052).

Shakespeare's plays were not written to be published, but to be performed. Some were published during his lifetime, but others were not. They existed only through scripts and the like. Seven years after his death, several of his friends, realizing many of his plays would soon be lost forever, gathered up what could be found, and published Mr. William Shakespear's Comedies, Histories, and Tragedies. The year was 1623, and that edition is commonly known as the First Folio. Three more folio editions were printed during the 17th century, and after that, the floodgates opened to printing Shakespeare's works. Item 48 is a copy of the Fourth Folio, published in 1685. It is noted as the most attractive of the folios, while picking up the same title page as the Third Folio of 1664. The Third Folio printed seven never before published "Shakespeare" plays, only one of which is now believed to actually have been written by Shakespeare. The Fourth Folio copied that edition's title page too literally, claiming these plays "Never before Printed in Folio," which obviously is incorrect. Item 48. £90,000 (US $128,269).

Item 30 is a collection of Dickinson's comprehensive pictures of the Great Exhibition of 1851, from the originals painted for H.R.H. Prince Albert, published in 1854. Dickinson Brothers published the book of illustrations from one of the earliest and greatest of international exhibitions. It was held at London's Crystal Palace, an amazing structure of iron and glass constructed specifically for this fair. It was consumed by fire in 1936 (the floors were made of wood). Over six million people attended the Great Exhibition of 1851. More than 100,000 items were displayed by 14,000 exhibitors from around the world. The show was based on four themes – machinery, manufactures, fine arts and raw materials. This two-volume set contains 55 detailed, colored drawings from the exhibition hall. £20,000 (US $28,506).