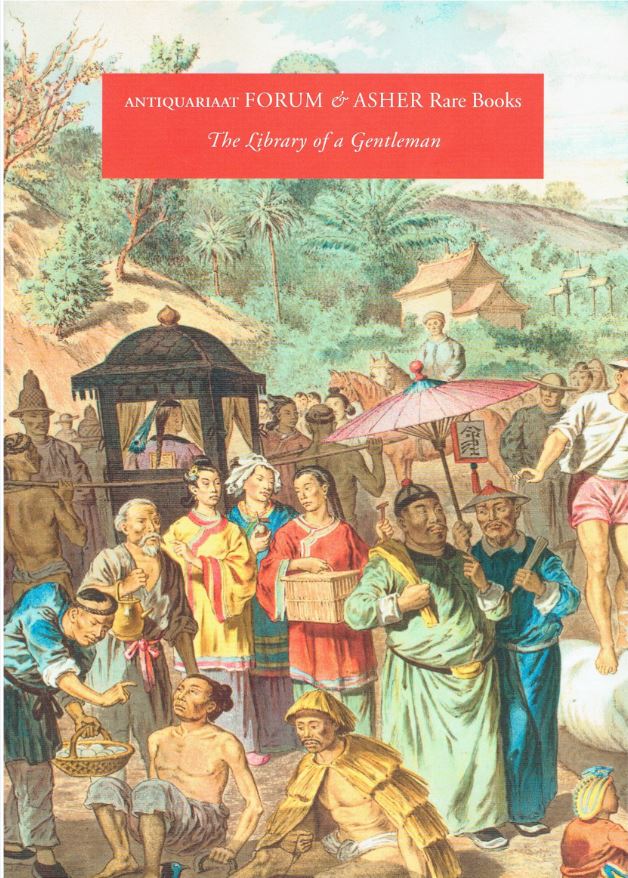 The library of a gentleman.

The Antiquariaat Forum and Asher Rare Books have published a catalogue of The Library of a Gentleman. The gentleman's name is not stated, nor are the specifics of his collecting. However, a perusal of the catalogue shows that he was primarily interested in travels, originating in the West and heading east, with Asia usually the destination. While some are of relatively recent vintage, such as the 19th to early 20th century, many others are earlier still. Many of the accounts came from missionaries, the Jesuits in particular, who visited and settled for long periods of time in nations that were practically unknown to Europeans at the time. Some of westerners' earliest looks at the eastern world will be found in these books. Here are some examples.

We will start with one of the earliest thorough descriptions of China, having been called "the most influential" description from the first half of the 17th century. Matteo Ricci was born in today's Italy, studied for the priesthood in Rome, joined the Jesuits and sailed from Lisbon to the Portuguese colony of Goa to serve as a missionary. After four years in Goa, he was sent to Macau, a Portuguese trading post and the only location in China where Christian missionaries were permitted. However, he studied the Chinese language and culture extensively, and this combined with astronomy and map making skills enabled him to move inland to Zhaoping. He was welcomed by the governor, but when a new viceroy came to power, he was expelled. He moved on to other cities, where he was again welcome. He spent time in Nanjing and eventually was invited to Beijing. He became an advisor to the Imperial Court and was the first westerner permitted to enter the Forbidden City. Ricci remained in Beijing until his death in 1610. Ricci kept extensive notes about China and his travels, but he did not prepare a book. However, the Jesuits recognized the value of the information he gathered, so they appointed his successor, Nicolas Trigaulot, to arrange, complete, and translate from notes in Portuguese to Latin Ricci's work. It was published in 1615 as De Christiana expeditione apud Sina suspecta ab societate jesu, by Ricci and Trigault. Item 153. Priced at €9,000 (euros, or approximately $10,271 U.S. dollars).

Next we have another intrepid traveler, though a very different sort. Isabella Bird was an unhealthy young woman, and one schooled only be her parents. Nonetheless, she had a sharp and incisive mind, becoming a voracious reader. At the age of 23, it was recommended to her that travel might be good for health, whereupon she set off from England to America. She returned home and wrote a book about America in 1856, but come the 1870's she was off again. She traveled to Australia, moved to Colorado for the healthy air, and in 1878, undertook an arduous journey to Japan, again because such exertion would somehow make her healthy. She was not content hitting the regular tourist spots. She traveled to places where no "European lady" had gone before. She became particularly familiar with the Ainu, an indigenous people of Japan. Item 13 is an 1880 second edition (same year as the first) of Ms. Bird's Unbeaten tracks in Japan: an account of travels in the interior, including visits to the aborigines of Yezo and the shrines of Nikko and Ise... €650 (US $741).

Someone had to open up Japan to all westerners and that role fell to American Commodore Matthew Perry. In 1852, Americans were excluded. President Millard Fillmore decided it was time the Japanese gave Americans equal access to Japan, and sent Perry and his fleet to convince them. Their argument was what is better known as "gunboat diplomacy." Perry arrived in 1853, left his written demands, and promised to return in 1854 for an answer. When he did, the Japanese recognized the wisdom of his "argument" and granted the Americans landing rights in Japan. Now, here is a really obscure item and amazing survival from Perry's visit. It is a program/invitation for a show the crew was putting on on-board May 29, 1854, while negotiations were taking place. It is not the kind of show you would want your sailors to put on today. It is headlined Ethiopian Concert, featuring the "Japanese Olio Minstrels," many in blackface, though there was also a few African-American participants. The program was printed on the ship, and is one of only two such programs known to have survived. Item 138. €27,500 (US $31,365).

Do you remember the play/film The King and I? It was based on a real story, and here is the book which described the real, as opposed to fictionalized, version of events: The English governess at the Siamese court being recollections of six years in the royal palace at Bangkok. Not quite as catchy a title. Anna Leonowens, who didn't look all that much like Deborah Kerr, was hired by the King, who didn't look much like Yul Brynner, to teach his wives and children English, science, and the like. After nearly six years, she had had enough, having personality conflicts with the King. She described her stay as "captivity." The King described her as difficult. Ms. Leonowens was something of a feminist, and the King probably was not. Item 99. €350 (US $399).