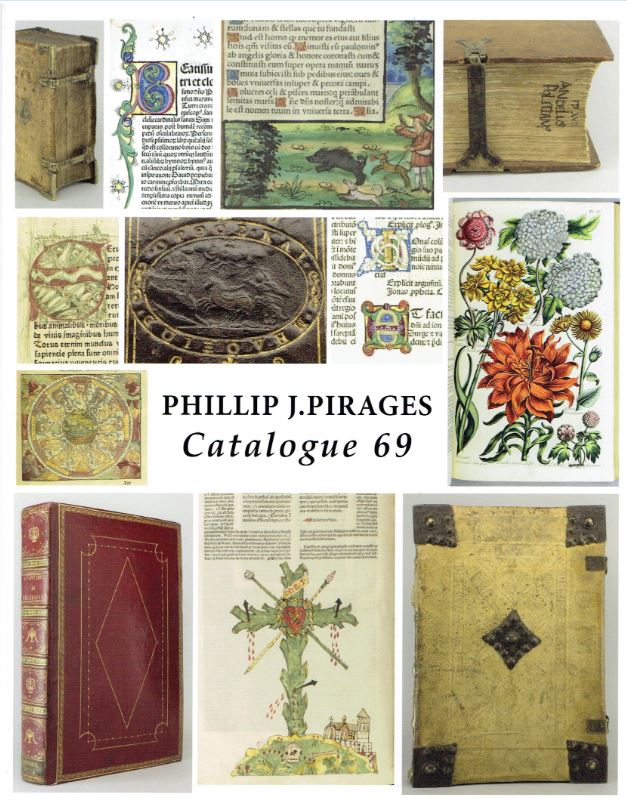 Phillip J. Pirages Fine Books and Manuscripts has issued Catalogue 69: Incunabula and Other Books Printed before 1800. Topics may vary, but obviously one common thread is these books are very old. It is just a question of how old. The catalogue contains an amazing 35 items of incunabula, along with 200+ other very old items. The earliest are primarily religious items, not surprising as most of what was produced in the early days of printing was religious in nature. Topics broadened out as the years went on. Here, now, are a few of the old books offered in Pirages' latest catalogue.

We begin with the oldest item in the catalogue. It isn't a complete book but a leaf. It is hard to find complete copies of books printed before 1460. Item 1 is a vellum leaf from Rationale Divinorum Officiorum, only the fourth book to be printed. It was published in 1459. Like Gutenberg's Bible, it was printed in Mainz, but by Johann Fust and Peter Schoeffer. Fust loaned money to Gutenberg to start his press, and when the latter was unable to pay his debt, sued and won Gutenberg's equipment. Schoeffer was Gutenberg's assistant. Fust and Schoeffer went into the printing business with the equipment, and printed the second and third books ever printed as well as this, the fourth. The book itself is a treatise on the church, dealing with the history of its liturgy, buildings, offices and such. It was written by Duranti, Bishop of Meade, during the 13th century. Priced at $22,500.

This next book is also an item of incunabula, a book of fables printed before the first edition of those of Aesop. Its title is Speculum sapientiae and it is a collection of tales presenting lessons about greed, avarice, arrogance and the like. As with Aesop, it uses animals to display its morality plays. Originally, the book was attributed to Cyril, though I have seen it attributed to two Cyrils – Cyril of Jerusalem, who lived in the fourth century, and Cyril the Apostle to the Slavs, who lived in the ninth. Apparently, it makes no difference, as it is now believed to be the work of Boniohannes de Messana (Messina), who lived in the thirteenth century. This edition was published in Basil, circa 1475. Item 13. $18,000.

Next up is a very old medical treatise, Select Observations on English Bodies: Or, Cures Both Empirical and Historical Performed Upon Very Eminent Persons in Desperate Diseases. The author was physician John Hall, and he was related to a very eminent person. He was Shakespeare's son-in-law. He married Shakespeare's daughter Susanna in 1607, and they moved into Dad's house after he died. Hall kept notes of his cases in Latin, which he intended to publish. However, he died in 1635 without having done so. They were obtained by James Cooke who translated them to English and finally had them published in 1657. In his notes, Hall explained the various remedies he used to cure the ill, some of which, Pirages notes, we would now find "alarming." However, Hall was at least restrained in his use of bleeding, the cure-all of the day that made its patients even sicker. Item 162. $6,500.

Robert Boyle was a 17th century British scientist considered to be one of the founders of modern chemistry. He was an alchemist, believing one could convert basic metals into those more valuable, but his experiments led to numerous scientific findings of greater accuracy. Item 108 describes one of his important conclusions – Tracts: Containing Suspicions About Some Hidden Qualities of the Air, published in 1674. At the time, air was believed to be one substance. However, Boyle's experiments with combustion and rusting led him to believe that air "is not, as many imagine, a Simple and Elementary body, but a confused Aggregate of Effluvians." His belief came from experiments with a flame under glass which quickly became extinguished. He concluded air must contain "some odd substance, either of a Solar, or Astral, or some other exotic, nature." Of course, what he was describing was oxygen. It would be another century before that element would actually be discovered and identified. $4,500.

Thomas Hall was a 17th century minister, a man who took his religion seriously but was probably not a lot of fun to hang out with. Item 132 is his 1654 diatribe The Loathsomness of Long Haire. This man would not have enjoyed the 1960's as his target was long haire on men. He claimed that long hair could become a breeding ground for vermin, which was probably true considering limited opportunities to wash it in those days. However, he appears to have stretched the truth with claims such as that when men in Poland cut off their long hair they lost their eyes or had other body parts grievously damaged. This is either untrue or something that happens only in Poland. Hall speaks approvingly of the work of another fanatic, William Prynne, author of The Unlovelinesse of Love-Lockes, though Hall did not feel he went far enough. Hall also had a few choice words for women, decrying make-up as "the badge of the harlot," and the display of cleavage an invitation to adultery. $3,000.

Jean Bodin was a notable French jurist with a reputation for rational discourse and humanism. It makes this book all the more difficult to explain: De la Demonomanie des Sorciers. It is Bodin's work on sorcery, published in 1580. The subject seemed to make him throw out all sense of judicial responsibility. When it came to witchcraft, Bodin was an uncritical believer. Bodin defined a witch as someone who tries to bring about some ungodly act through a pact with the Devil. He had no mercy toward those found to be guilty of witchcraft. Death was the appropriate punishment, fire the preferred means. Judges who did not so punish witches should be punished with death themselves. He argued that this was the only way to appease the wrath of God, which would bring pestilence and other calumnies on nations that did not act severely against witches. On top of this, Bodin believed in throwing out all normal legal protections when someone was accused of sorcery. He claimed that no one accused of witchcraft should be "acquitted and set free unless the calumny of the accuser is clearer than the sun, inasmuch as the proof of such crimes is so obscure and so difficult that not one witch in a million would be accused or punished if the procedure were governed by the ordinary rules." Indeed, he was right, not one in a million so accused would have been convicted, but he failed to recognize the correct reason was that they were innocent, which is why those protections were put there in the first place. He also failed to see that when accusations become tantamount to conviction, false accusations will surely follow. Item 242. $9,500.