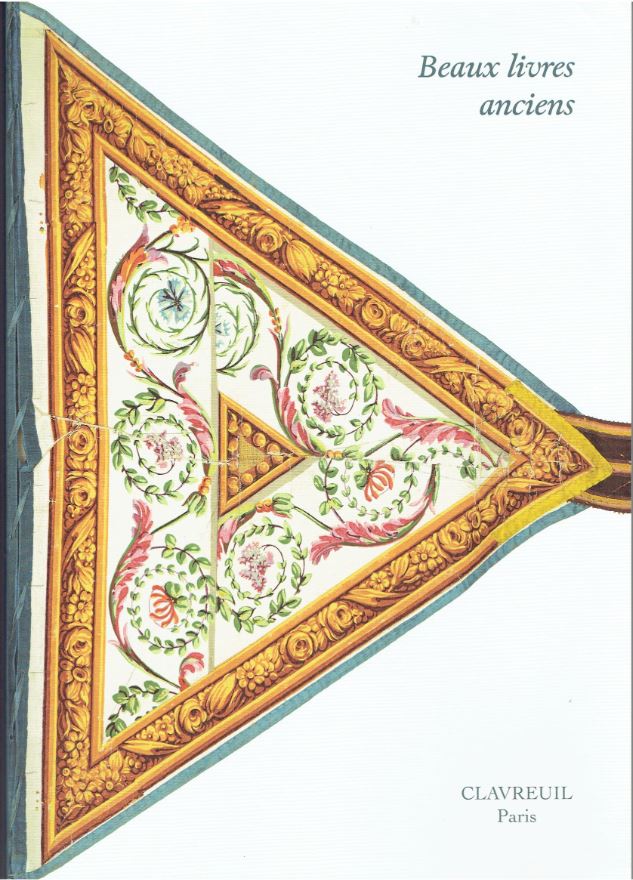 Librairie Clavreuil of Paris has issued a catalogue of Beaux Livres Ancien, or beautiful antiquarian books. This is part one, covering authors from letters A-L. Clavreuil is a continuation of the 80-year-old firm of Librairie Thomas-Scheler, the name recently having been updated to reflect current ownership of Bernard and Stéphane Clavreuil. However, they note their continued respect for the traditions established by their founder and predecessor, Lucien Scheler. Their focus remains the best of antiquarian books, and this catalogue continues that tradition. Subjects vary, but the books are all special. These are a few of them.

We begin with a pioneering work in the field of mining, metallurgy and chemistry, De Re Metallica, published in 1556. Its author was Georgius Agricola, known as the "father of mineralogy." Printing and the Mind of Man referred to this book as "one of the first technological books of modern times." At the time, there was no systematic text related to mining. Agricola provided a thorough description of mining and the related metallurgical processes, including prospecting, mining administration, and the duties of officials. Herbert Hoover described this work as "the first important attempt to assemble systematically in print the world-knowledge on mining, metallurgy, and industrial chemistry." For those wondering why the 31st President of the United States reviewed this book, Hoover's earlier career was in mining, working his way from an engineer and consultant to a wealthy investor in mining enterprises. Item 1. Priced at €35,000 (euros, or approximately $39,239 in U.S. currency).

Few inventions captured public imagination like the one announced in this book: Historique et Description des Procédés du Daguerréotype et du Diorama... This is Louis-Jacques Daguerre's announcement of his photographic process, known as daguerréotype. No one can be said to be the inventor of photography, as several were working on the idea at the time, including Niepce, whose work is described by Daguerre. However, Daguerre was the one who brought the process from laboratory to practical use, raising it from experimental to employment creating images for public consumption. His process would continue to be used from its introduction in 1839 to the 1850's, when superior methods would supplant it. The first printing of this manual was released on August 20, 1839. Seven more issues by various printers were issued of this quickly popular book in 1839, this one being from Giroux of Paris in September 1839. Item 32. €4,500 (US $5,047).

This next item is an American in Paris, so to speak. Item 10 is American Scenery or Land, Lake and River Illustrations of Transatlantic Nature. It combines the art of William Henry Bartlett with the text of Nathaniel Willis. Bartlett was a British artist and engraver who came to America in 1835 to draw scenes across the country. He drew views of cities, including New York, Boston, and Albany, notable structures including Mount Vernon, Yale College, and the Erie Canal, and scenic locations such as Lake Ontario, Saratoga Lake, and several of Niagara Falls. The two volumes include 119 plates and in this copy they have been hand colored in a meticulous contemporary hand. €3,500 (US $3,924).

Item 31 is Recherches sur les ossements fossiles de quadrupèdes... a study of fossil quadruped bones, published in 1812. The author was Georges Cuvier, notable for his expertise in comparative anatomy and paleontology. It enabled him to combine the two fields in that he not only compared the anatomical features of living animals, but also with those long since extinct but preserved in the fossil record. Despite the similarities of features in so many different animals, Cuvier was never led to considering evolution. In fact, he totally did not believe in it. Of course, these were the days before Darwin, but still there were evolutionists in the era, they just believed it was caused by some sort of predisposition within species, rather than by natural selection. Cuvier did believe in extinction, even that being controversial at a time when creationism prevailed. Many did not think that God would create a species and then let it die out. What would be the point? Cuvier believed in catastrophic events which would kill off life at various times, to be replaced by new forms. The way he found similar fossils in distinct layers led him to conclude that each represented a specific ancient time period, with the next layer representing the start of a new era after the previous cataclysm. €8,500 (US $9,533).

Pierre Belon was a Renaissance man, both literally in terms of the time period in which he lived, and in the figurative sense of being knowledgeable in a wide variety of fields. He was an explorer, scientist, archaeologist, and writer. Within science he studied fishes, birds, plants, and was one of the first to tackle comparative anatomy. Item 11 is L'Histoire de la Nature des Oyseaux, his book on birds, published in 1555. This is not an Audubon style book, highlighting beautiful drawings of birds. Belon's illustrations are simpler and his text scientific. One shows the skeleton of a bird next to the skeleton of a human, allowing for a comparison between the two. The Dictionary of Scientific Biography says, "Belon can be considered the originator of comparative anatomy." Belon traveled through southern Europe and the Middle East to observe the specimens about which he wrote, rather than relying on ancient texts as was often the case in these early days of scientific study. €25,000 (US $27,943).