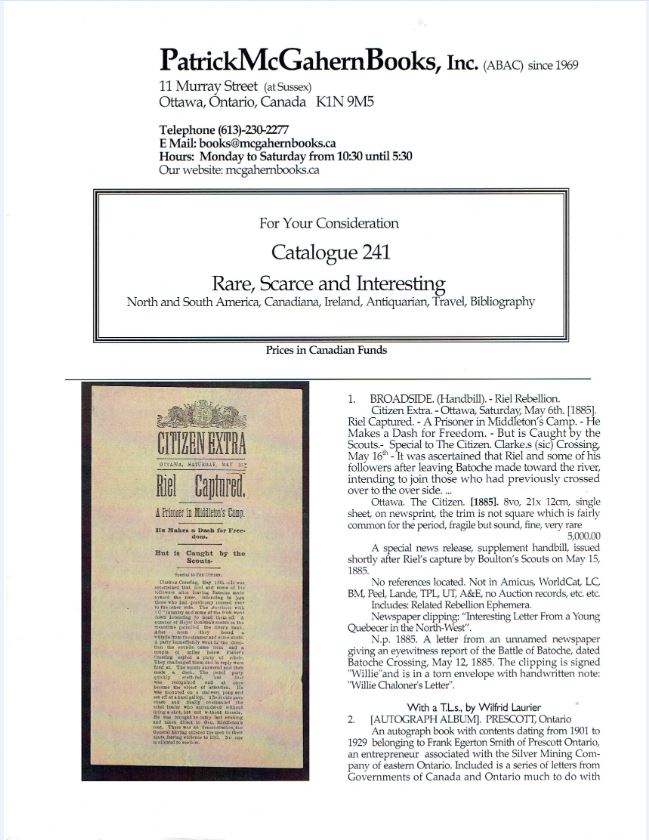 Patrick McGahern Books has released Catalogue 241. Rare, Scarce and Interesting North and South America, Canadiana, Ireland, Antiquarian, Travel, Bibliography. Geographically, if you take the quadrant that is in both the western and northern hemispheres, you have most of the territory covered. Of course, material described as antiquarian and bibliography are without location. Whatever the type, the books and ephemeral items are scarce if not rare, and indeed interesting. Here are a few.

We begin with a quintessentially American type of book – the captivity. Item 30 is A Narrative of the Captivity of Mrs. Johnson. Containing, an Account of her sufferings, during four years, with the Indians and French. Indian captivities are common among American writers, but I hadn't heard of French captivities before. I'm not sure which was worse for a proper British lady. Susannah Johnson was captured from her home in Charlestown, New Hampshire, in 1754 during the French and Indian War. Charlestown was the location of a fort, and it was there that the first casualty leading to the French and Indian War took place. Mrs. Johnson, several of her family members, and a couple of neighbors were taken from their homes by Indians and marched to Quebec. She was nine months pregnant at the time and gave birth to a daughter on the way. Mrs. Johnson was separated from all her family but the newborn, spending a few months with the Indians before being sold to the French in Montreal. Eventually, the family was reunited – in prison in Quebec. Finally, she was released via a prisoner exchange in 1757, which took her to England before making her way back home to America. Mrs. Johnson, now Mrs. Hastings (Mr. Johnson died and she remarried), finally got around to writing an account of her captivity in 1796. Offered is a third edition published in 1814, four years after she died. As such, it naturally is the first to include the sermon preached at her funeral, along with other material, including the names of those residents of Charlestown killed or imprisoned during the French and Indian War. Priced at CAD $1,500. (Canadian dollars, or approximately $1,137 U.S. dollars).

Item 20 is a first edition, with all first issue points, of Joseph Conrad's Nostromo. A Tale of the Seaboard. Published in 1904, it is set in the fictional South American country of Costaguano. Much of the story is centered around a silver mine, and how hidden silver eventually controls the life of the story's once incorruptible protagonist. The book was not very well received for a work by Conrad at the time, but many have since come to view it as his greatest novel. CAD $1,500. (U.S. $1,137).

America's first major western expedition, led by Lewis and Clark, penetrated the Northwest. The second, headed by Zebulon Pike a short time later, examined the Southwest. The third, led by Stephen Long, went in between, traversing the Platte River to the Rocky Mountains in 1820. While that is Long's best known mission, three years later he was assigned another route, more northerly than west. This time he proceeded up the Mississippi to the Minnesota River (then known as St. Peter's River), and from there to the headwaters of the Red River of the North. This would take him into Canada, and next he then traveled east to the Great Lakes. An account of this journey was published in 1825, written by Long's geologist, William H. Keating: Narrative of an Expedition to the Source of the St. Peter's River, Lake Winnepeek, Lake of the Woods... This account of Long's second expedition is described as very thorough, with details about the area, the local Indians, and the Red River Settlement. Item 34. CAD $2,000 (US $1,512).

Here is another account of a man who traveled west. He actually traveled much farther, but nonetheless, his hardships, if any, were far fewer. Such is the advantage of traveling over a century later. George Wilbur Spinney undertook a seven-week trip in the late summer of 1947, covering 8,325 miles. He crossed Canada from Montreal to the west coast, hence south to California, across the U. S. to Chicago, and back home again. He then created this typed manuscript of his adventure, which includes photographs, newspaper clippings, and tipped-in programs. The trip was described as for business and pleasure, Mr. Spinney then serving as President of the Bank of Montreal, Canada's oldest bank. It is fortunate that Mr. Spinney was able to take such a trip in 1947 as he died early the following year. Item 65. CAD $250 (US $188).

Item 68 is a dramatic poster celebrating the Canadian National Exhibition Toronto Aug. 25 to Sep.10. The event was Canada's jubilee or semi-centennial, celebrated in 1917. The full-color poster by artist Arthur Henry Hider depicts a mounted Royal Herald, holding a proclamation by the Queen. Trumpeters play just behind the herald, while in the background the exhibition grounds can be seen. The poster proclaims, "Jubilee Spectacle. Dynamo of Compelling, Magnetizing Energy. Fifty Years of Fascinating History Dramatically Told. 1200 Performers." It adds, "War – In all its branches vividly shown." This occurred at the time of what was then known as the Great War, now World War I. The top of the poster announces "$6.00 Cleveland to Toronto via 'C & B' Line Daily Steamers." The C & B was the Cleveland & Buffalo Transit Company, which ran a thriving business along the Great Lakes until the late 1930's. How passengers reached all the way to Toronto is not clear. Surely the ships did not sail up or down Niagara Falls, and the trip through the Welland Canal takes many hours. Perhaps each way was a full day trip. CAD $900 (US $680).