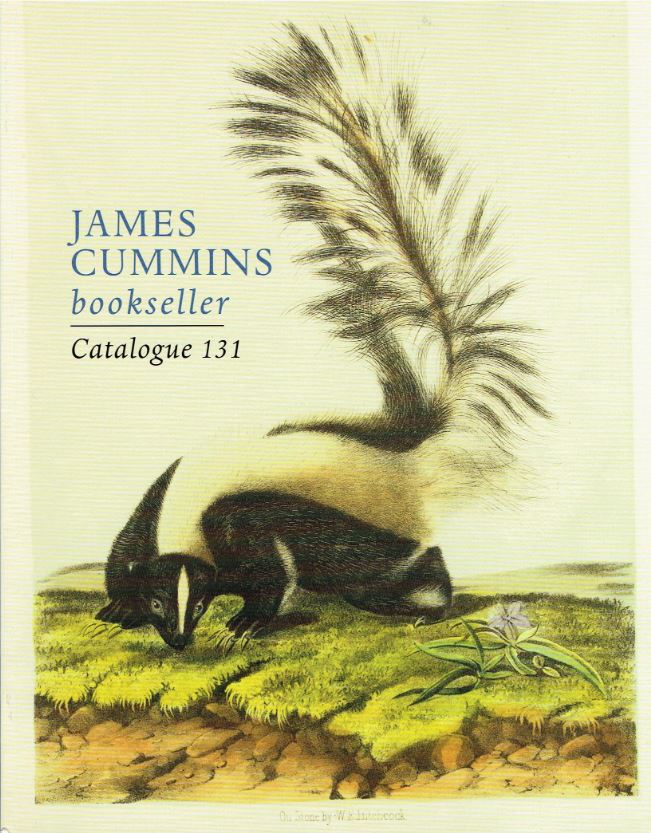 James Cummins Bookseller has issued Catalogue 131. Cummins' catalogues usually offer a variety of material and this one is no exception. There are books, manuscripts, and various ephemeral items. Subjects can be just about anything. Items are mostly in excellent condition and are of significance. These are a few of the items to be found in Cummins' latest catalogue.

We begin with a story that was long forgotten until turned into a movie a few years back. Item 64 is Twelve Years A Slave, by Solomon Northup, published in 1853. Northup was a farmer and violinist from upstate New York, a free black man whose father had been a slave before it was outlawed in that state. He was enticed to travel to Washington D. C., ostensibly to play the violin. He was tricked. Instead, Northup was kidnapped and sold into slavery in Louisiana. Having no contact with outsiders, he was trapped. He could not get a message home. He toiled in slavery for 12 years before finally convincing an itinerant Canadian carpenter working temporarily on the plantation to send some letters back home. Finally, with the help of the son of his father's former owner and New York State officials, he was rescued and taken home. He wrote this book the year he was released. He spoke to various abolition audiences over the next few years. Northup was last seen in 1857, lecturing audiences in Canada. What became of him is unknown, but it is unlikely he was kidnapped into slavery again, as by then he was too old to be very desirable as a slave. Priced at $5,500.

Item 34 is a pair of letters written by F. Scott Fitzgerald in the 1930's to his friend and fellow author Charles "Bill" Warren. Warren was a young man whose writing impressed Fitzgerald greatly, though he saw Warren's role more in writing for the theater and film than novels. By this time, Fitzgerald was off in Hollywood writing screenplays, a job he abhorred, but he desperately needed money to repay debts and the job paid well. The first letter, from October 8, 1937, is very upbeat. He jokes about a letter from Warren who had heard he was making $2,500 a week. Fitzgerald writes that he is sending Warren half of it since he doesn't know what to do with "all that money." In fact, Fitzgerald was making half of that, still a princely sum in 1937. The next letter, from November 15, 1938, is not so cheerful. Evidently, Warren was seeking some assistance with his work from Fitzgerald and the latter had not timely provided it. A down Fitzgerald writes, "We always seem to meet when I'm tired and the last thing I have the energy for is to focus upon another person's writing problems." He goes on to say that three-fifths of his salary is going toward paying his debts, and when he had last asked Warren for a favor, he had been less than helpful. He concludes, "I wish you'd picture me as sometimes susceptible to troubles and fatigues." $25,000.

Here is another remarkable letter. The letter was written in 1804 by President Thomas Jefferson to his Secretary of War, Henry Dearborn. Dearborn had written Jefferson about some slanderous gossip directed towards him by Seth Hunt, who was seeking public office. Jefferson assures Dearborn he heard about it only from his Postmaster General and one other person, and that he gives it no credence. Jefferson explains, "When I have knoledge [sic] of a character myself, I place more confidence in that knoledge than in any suggestions which can be made, and am more apt to look for their source in the character & circumstances of the suggestor." Jefferson goes on to say that his confidence in Dearborn "has never been diminished," and that it has only been strengthened by knowing him better. The President obviously meant what he said as Dearborn continued to serve for the remainder of Jefferson's term. Item 53. $60,000.

Next is an obscurity for those who collect Richard Burton, the writer/explorer/adventurer, not the actor. Burton was one of the great travelers of the 19th century, including a life-threatening journey to find the source of the Nile, a forbidden trip to Mecca dressed as an Arab, and even one to Salt Lake City. Here is an account of a far more mundane trip, a vacation that turned out to be more unpleasant than some of the dangerous ones. Item 16 is Three Months in Abbazia by Burton and his wife, Isabel. It is a rare reprint of an article that appeared in the Vienna Weekly News of August 4, 1888. Abbazia is a resort town on the Adriatic sea in Serbia. It is not all that it is cracked up to be, or at least was not in 1888. The Burtons complain of the Scirocco, the relentless wind off the Mediterranean that is not pleasant in winter. The resort also suffered from other problems, including mediocre food and the lack of a pharmacy. Mr. Burton was suffering from painful gout at the time. The Burtons wrote to the Vienna paper confident it "would print the truth about a place which spends so many florins in advertising itself and in silencing the unpleasant voice of truth." $5,000.

Item 7 is a copy of the first octavo edition of America's most famous color plate book, John James Audubon's The Birds of America. This is the affordable edition, though some may find $65,000 a bit beyond what they can afford. However, when you realize that the first edition, the double elephant folio, has sold for as much as over $10 million, this price is affordable indeed. The original edition was so expensive to produce, and consequently to sell, that Audubon could not make any money on it. However, he realized that there was great interest in his work, so he published an edition smaller in size, though just as complete in drawings (plus a few more). Published in 1840-1844, the octavo edition was able to sell enough copies to provide its author/illustrator with a good profit. $65,000.