A Miscellany of Topics and Formats from L & T Respess Books 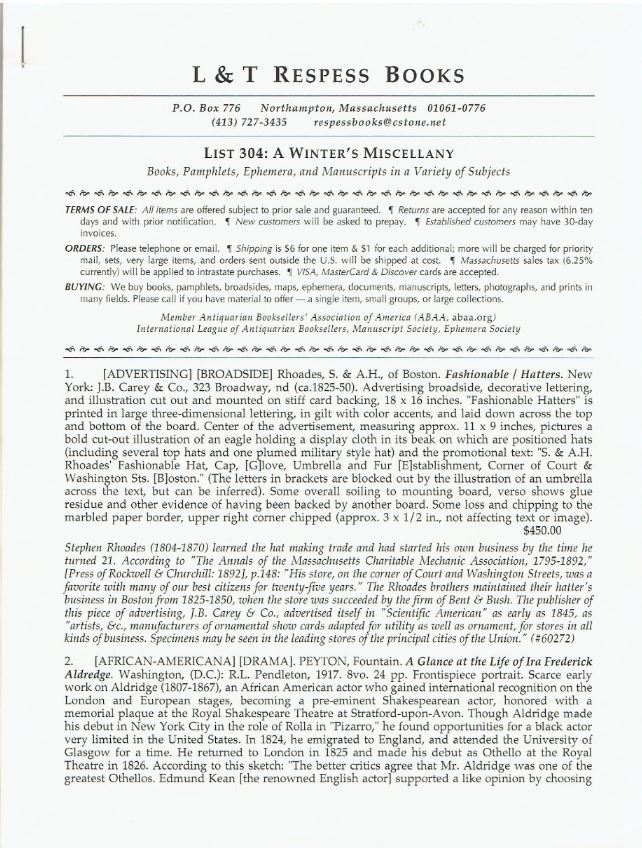 A miscellany with some unusual items.

From L & T Respess Books we have received List 304: A Winter's Miscellany. Books, Pamphlets, Ephemera, and Manuscripts in a Variety of Subjects. In other words, you may find any subject in any format in this catalogue. It's hard to provide a description of that beyond one word – miscellany. We will add that there are some unusual and intriguing items in this selection, not the kind of things you come across everyday. Here are a few examples.

Since this is a presidential year, and one in which there is talk of a third party, we will start with an item from another presidential year, one in which there were third, fourth, fifth, and sixth parties. At least two of those could be considered serious in terms of affecting the outcome of the election, and none of it was good for incumbent Harry Truman. The year was 1948, the year of the infamous Chicago Tribune "Dewey Defeats Truman" headline. Item 139 is a ballot from the state of Virginia, and it has been signed by 5 of the 6 presidential and vice-presidential candidates. Included are the winners, Democrat Harry Truman and running mate Alben Barkley, runners up Thomas Dewey and Earl Warren, who would become more important to American history than most winning vice-presidential candidates let alone losers, "Dixiecrat" Strom Thurmond, Progressive Henry Wallace, who was FDR's third term vice-president, and Socialist Norman Thomas and their running mates. Only the Socialist Labor candidates are missing. It is amazing Truman won since he was running against two Democrats, Thurmond from the right (who carried four southern states) and Wallace from the left. Priced at $4,500.

Here is another presidential item. We all can picture Washington and Lincoln, but how about Millard Fillmore, Franklin Pierce, or Chester Arthur? Now you can. Item 108 is Presidents of the United States, Steel Plate Portraits with Fac-Simile Autographs. It was one of several portrait collections of famous people published by Ralph Trautmann. As it came out in 1882, it covers the first 21 presidents, from Washington to Arthur. Item 108. $250.

This is an unusual newspaper. Item 3 is a collection of seven issues of The Meteor from 1872-1874. It was published by the Alabama Insane Hospital. Respess tells us it was the third paper published by an American insane asylum, the first in the South. Patients contributed articles on substantive issues, such as Darwinism and Spiritualism, along with discussions of the definition of insanity and treatments being used. There are also articles on the goings-on of the hospital, some humorous. The Alabama Insane Hospital was a progressive institution, believing that activity such as preparing a newspaper and other work was healthy for the patients. Surprisingly, they even accepted black patients, though they were segregated. $7,500.

This man was both a winner and loser in presidential elections, and both times by overwhelming margins. Herbert Hoover was enormously popular in 1928, but not in 1932. Rejected by the electorate in 1932, the Great Depression in full swing, Hoover stuck to the views that led to his defeat. Item 57 is Hoover's The Challenge to Liberty, published in 1934. The copy is inscribed by the author to David J. H. Cole, who had been a reference assistant in the Library of Congress. Hoover argues for individual liberty and against the massive government programs Franklin Roosevelt had initiated to pull the country out of the Depression. His views were popular with those who opposed Roosevelt, but the general population had had its fill of Hoover's ideas. Item 57. $275.

If you were in Buffalo on April 9-11, 1863, you could have seen an amazing performance, along with picking up a copy of History of the Little Fairie, Dolly Dutton; Also Containing the Songs She Sings. Twelve year old Dolly certainly was little. She was 29 inches tall and weighed 15 pounds. Her father would walk around the stage with Dolly in the palm of his hand. He was a good promoter. Her parents and siblings were all standard size, except one tiny sister who also performed, but died at the age of 8. Dolly would sing, one reviewer saying her singing arose terror and pity among the audience, as well as displaying her smallness. She generally toured with or picked up an adult singer to help fill time. People of her size generally did not have long lives in those times, but Dolly lived to be 38. She got married to a regular size man, had a baby that did not survive, and had mental problems that required institutionalization. It must be hard condemned to spending much of your life as a one-person freak show for gawking crowds. Item 130. $450.

Here is another unusual person. Item 145 is a broadside for Coming! Colonial Jack. World's Greatest Long Distance Walker and His Famous Wheelbarrow, circa 1910. Jack walked around the borders of America, 9,000 miles, pushing a wheelbarrow. God only knows why. He made appearances in towns along the way, and the blank space for the location on this broadside says "Opera House Wed. Dec. 3." The broadside is accompanied by a pamphlet, The Walk of Colonial Jack, which perhaps explains why he did this and how he entertained folks at his personal appearances. $450.