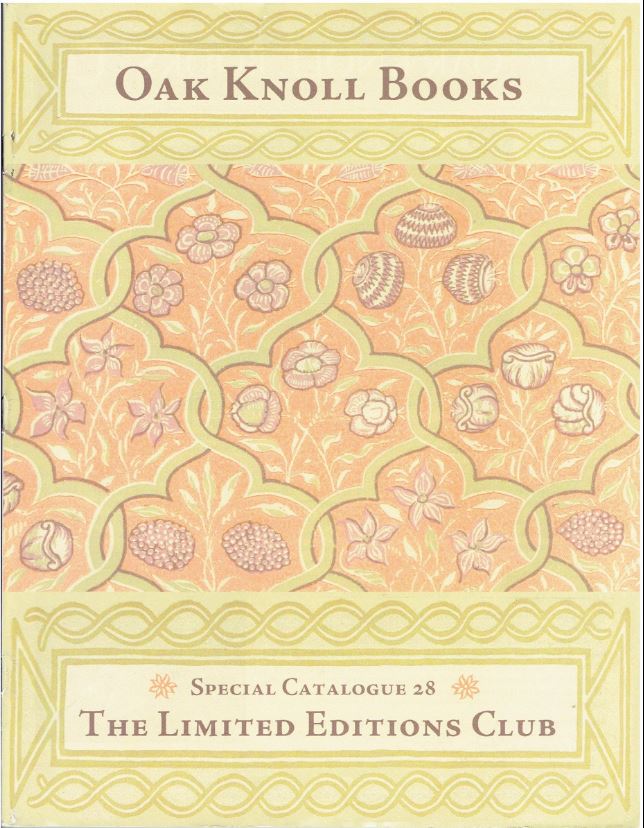 Oak Knoll Books has published their Special Catalogue 28. The Limited Editions Club. The Limited Editions Club was founded in 1929 by George Macy. His idea was to publish fine and limited editions of classic books, adding the artwork of notable illustrators and artists. Usually, the books were signed by the artists and/or others associated with the publication of the edition. Occasionally, an author might sign the books, but mostly the books were older and the authors, for obvious reasons, not available to sign. Macy gathered up a list of subscribers, published his books in runs of 1,500 numbered copies (and printed a few more for other uses), and originally sold the books for $10 each, a lot of money at the time. There were a few books published outside of this sequence, but the formula applied to most. Twelve books were published per year.

George Macy died in 1956. The company was next managed by his wife, Helen, then their son in 1968, and was sold to Boise Cascade in 1970. Boise in turn sold it a few years later to Ziff-Davis, who sold it to Cardavon, a company controlled by Gordon Carroll, a former editor of Time. Carroll died in 1978, after which the company was sold to Sidney Shiff, who operated it until his death in 2010. However, under Shiff's management, the Club evolved to selling much more expensive artists' books rather than traditional classics.

This company history is recited to help explain where Oak Knoll came up with most of the books offered in this catalogue. Oak Knoll purchased a large collection of Limited Editions Club books from the widow of Robert McHenry Carroll, who was the son of 1970's owner Gordon Carroll. It turns out that these books were evidently retained copies by the corporation, as they go all the way back to its first year. They were unnumbered, and often have initials on them, such as "G. M." for George Macy, "H. M." for Helen Macy, "G. C." for Gordon Carroll, and "R. M. C." for Robert McHenry Carroll. While most books in this catalogue trace this lineage, Oak Knoll has also listed Club books already in their possession. Here are a few of the 456 Limited Editions Club books (and a few ephemeral items and books about the Club) offered.

We begin with the first book published by the Limited Editions Club, in 1929. Starting a business selling expensive books in that year sounds like a recipe for disaster, but somehow they succeeded. Item 1 is The Travels of Lemuel Gulliver, the Jonathan Swift title commonly known as Gulliver's Travels. The introduction was provided by Shane Leslie, Irish born like Swift, a baronet, diplomat, writer, and cousin of Winston Churchill. The illustrations were provided by Alexander King. Initiating the formula that would be used for decades, the book was published in 1,500 copies and was signed by the illustrator. The Limited Editions Club passed its printing jobs around to various fine printers, their first book being printed by Norman T. A. Munder of Baltimore, who had won numerous awards for the quality of his work. Priced at $275.

This next item precedes even their first book. It is an original invitation for membership. It is headed The Limited Editions Club Incorporated, Your Favorite Books. Printed in 1929, it came in cloth-backed boards, quite fancy for a solicitation. Item 448. $25.

Item 6 comes from 1930, the Club's second year of operation. It is The Life and Strange Surprising Adventures of Robinson Crusoe of York, Mariner, by Daniel Defoe. This one was printed by the legendary Grabhorn Press of San Francisco. It was signed by illustrator Edward A. Wilson. This book indicates it was an office copy, and has a stamp showing it as one of 25 presentation copies. It has its number crossed out with the initials G. M. (for George Macy) written in. It was the 11th book printed by the Club. $135.

This is not the typical Limited Editions Club volume. Oh the book, or set, looks as you would expect. The set is composed of Lewis Carroll's classics, Alice's Adventures in Wonderland, and Through the Looking Glass. It was published in 1932. Rather than using a current illustrator, the Club used the illustrations from the original by John Tenniel. They could not get Tenniel to sign these 1,500 sets as he had died in 1914. They did get typographer and binder Frederic Warde to sign, but there is one more signature that makes these books special. They were signed by Alice herself. The Alice of Carroll's books may have been fictional, but the character was based on young Alice Liddell. Carroll (actual name Charles Lutwidge Dodgson) met the Liddell family in 1855, and in 1862, Alice, then 10 years old, asked Carroll to tell her and her sisters a story. This was not the first time he told them a story, but it was the first time she made what became a historic request, that he write it down. So evolved the Alice story, with the lead character based on Alice Lidell. In 1932, the Limited Edition Club convinced Alice, now Alice Hargreaves, to sign their books. Alice was 80 years old at the time and died two years later. Item 22. $5,500.

This is probably the most notable of all the books the Limited Editions Club published. In 1935, Macy chose to publish an edition of James Joyce's Ulysses. The first edition had only been released 13 years earlier. To complement this edition, he hired the great artist Henri Matisse to provide illustrations. His drawings were not particularly related to Ulysses. They were, in actuality, based on the Odyssey. Undoubtedly, there was a perfectly good reason, such as Ulysses is an odyssey and Matisse probably did not read Joyce's book. It isn't easy. Both Joyce and Matisse were to sign the volumes as well, providing the signatures of one of the century's greatest writers and greatest artists. However, while Matisse fulfilled his role in signing all 1,500, Joyce only signed 250. Joyce may have stopped because Matisse's illustrations were not directly related to his book, though this is not clear. This copy is signed by both Matisse and Joyce. Item 49. $20,000.