Original Works of American Art from the William Reese Company 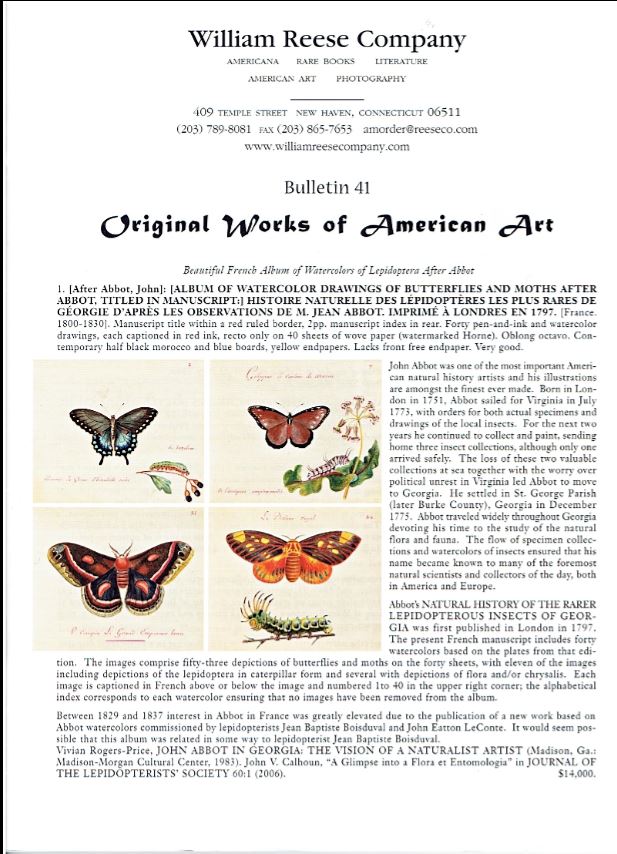 The William Reese Company has prepared their Bulletin 41 Original Works of American Art. We don't ordinarily write about catalogues of art, but there are several reasons why this one is appropriate for this site: (1) William Reese is one of the nation's premier booksellers, particularly within the field of Americana; (2) many collectors these days focus on a subject, and then collect various items in the field, rather than just books; (3) many of the artists in this selection are deeply connected to books, being book illustrators or writers themselves, or their subject matter being of events the topic of notable books, rather than just a pretty picture. If you collect books in the related topic, you will quickly see the connection. Here are a few of these works of art - paintings, drawings, and other original creations.

In the 1820's and 1830's, John James Audubon was busy observing and drawing specimens for one of the greatest, and most valuable books ever published, his Birds of America. However, Audubon had a second use for his drawings which he hoped would be quite lucrative. While in London preparing for the publishing of the first section of his book, Audubon met a young artist, John Bartholomew Kidd. Kidd was but a kid, 19 years old, but Audubon was impressed by his skill. He lamented how far he might have gone had he been that skilled at such a young age. Audubon had a plan, and he and Kidd went into a partnership. He would give Kidd copies of his drawings, Kidd would reproduce them in oil, and they would display them at a gallery, sales proceeds being split between the two. Audubon trusted Kidd to create the background setting for the birds using his own imagination. In all, Kidd produced 94 paintings, 60 of which are known to exist today. In time, Audubon felt Kidd was not working diligently enough, perhaps because of an injury he suffered, and the project was broken off. Item 39 is one of Kidd's oil paintings based on Audubon's art: Republican Cliff Swallow, painted in 1831. Priced at $75,000.

Here is another drawing that would eventually end up in a book. Thomas Kenney was appointed by President Madison as the Superintendent of Indian Trade and later was raised to the first Director of the Office of Indian Affairs. He was very sympathetic to America's natives. However, after the election of Andrew Jackson in 1828, not a great supporter of Indian rights but a great believer in the spoils system, he lost his job. Still, McKenney had a related calling to follow. He determined to gather as much information as he could about Indian culture for preservation in book form. McKenney brought in writer James Hall and artist Charles Bird to produce the History of the Tribes of North America. Item 40 is a sketch by Bird circa 1830 of the head of Chippewa Chief Peechekir (also called Buffalo). The print of Peechekir in the History is clearly based on this sketch. $28,000.

This next work of art is related to another person who sought to preserve Indian culture in the 1830's at a time when it was about be overwhelmed by western influences. George Catlin was like Bird, rather than McKenney or Hall. He, too, was an artist, and his Letters and Notes on the Manners, Customs, and Condition of the North American Indians, and North American Indian Portfolio captured views of the Plains Indians and their ceremonies for posterity. However, item 16 is not a picture of an Indian. It is a portrait of Clara Bartlett Gregory Catlin, George Catlin's wife. George Catlin wasn't even the artist. Perhaps he just stuck to Indians. The painter for this portrait was Scotch artist George Linen. It was painted around 1840. Mrs. Catlin suffered from ill health and died in 1845 while they were visiting Paris. $6,000.

By the time this next man came along, not just had the Indians' culture been overwhelmed, they were well along in the process of being driven from most of their homeland. The West was now the Wild West, and the Indians were in the way. However, they, along with the cowboys, gunslingers, and various assorted western characters, fascinated people in the East and Europe. No one was better at turning this fascination into a thriving business than Buffalo Bill Cody. He took his Wild West Show to England and Europe several times. During one such trip in 1893, he was painted in England by Alfred Agoust. Agoust came from a family of French jugglers, and Bill is performing one of their skits with a couple of street characters. In it, the two men, on either side of Bill, use their juggling skills to pass his flask of whiskey back and forth while a bewildered Bill tries to figure out where it has gone. Item 2. $47,500.

Item 9 is a pencil sketch from artist/writer John David Borthwick (sometimes confused with John Douglas Borthwick). John David was from Edinburgh. He received an inheritance which he put to good use traveling the world. He came to America in the late 1840's, traveled around the country, and in 1850, was swept up in the Gold Rush. He was off to California, and remained there three years drawing scenes of the people and activity of the era. He later traveled on, and in 1856 finally returned home. It was then that he wrote his best known book, Three Years in California. It recounts his experiences and includes his own illustrations. The sketch here offered is a Gold Rush scene, a mining camp with tents and men milling around. An office of Adams & Co. Express is shown. Adams transported gold from San Francisco to the east coast. $4,000.