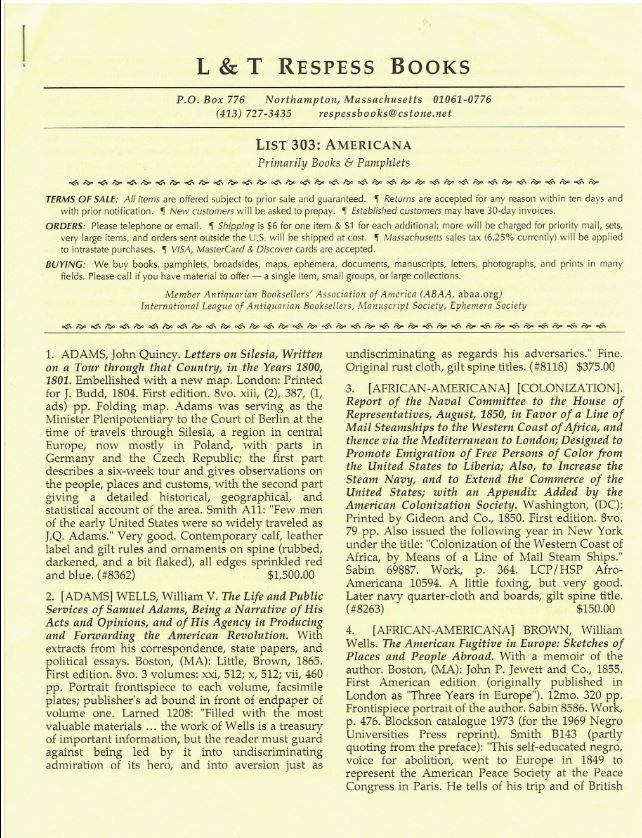 L & T Respess Books has issued List 303: Americana. There is not much that needs to be said to describe what is here despite just a single-word title. There is a heavy concentration of 19th and early 20th century material, along with some more recent books that are reprints of older items or pertain to those times. Other than that, the books and pamphlets are as varied as America itself. These are a few samples of what you will find.

He may not get the publicity today of fellow 19th century generals like Lee or Grant, Andrew or Stonewall Jackson, but there was no greater commander of American forces during that century than Winfield Scott. Scott was promoted to a brigadier general at the age of 27, and served as a general longer than anyone in American history, 53 years. He commanded forces from the War of 1812 all the way up to the early days of the Civil War. While there weren't too many notable wars during that long time span between, he was engaged in numerous Indian wars and was the commanding general during the Mexican War. He was also the Whig Party nominee for President in 1852, but lost that race to Franklin Pierce. Item 166 is the Memoirs of Lieut.-General Scott, LL.D, written by himself, published in 1864. This copy is inscribed by Scott to Horace Binney, who served one term in Congress as a representative from Pennsylvania. Priced at $2,500.

Scott and Pierce would be at odds again a few years later over the issue of pay. In 1855, Congress promoted Scott to Brevet Lieutenant General, a rank held by no one other than George Washington. The promotion was made retroactive to 1847, whereupon Scott filed for $27,000 in back pay. Pierce and his Secretary of War, Jefferson Davis, who did not much like Scott, resisted. Item 167 is the Message from the President of the United States, Communicating...Certain Information Respecting the Pay and Emoluments of Lieutenant General Scott, published in 1857. Ultimately, they settled upon the sum of $10,000. $85.

Here is another man who did not care for Jefferson Davis, though for very different reasons. Confederate General Joseph E. Johnston long butted heads with President Jefferson Davis, beginning over the rank he received. Their relations remained strained through the rest of the war. Davis felt Johnston was not sufficiently aggressive in the field, and this became a notable criticism of him when he put up limited resistance to Sherman's march on Atlanta. However, Sherman would later express his great respect for Johnston and the two would become friends (Johnston was a pallbearer at Sherman's funeral, and would become ill and die due to the inclement weather that day). The reason for his respect was that Sherman understood that Johnston was hopelessly outmanned and greater resistance would have only resulted in more casualties to his men in a hopeless cause. Item 44 is Johnston's Narrative of Military Operations, Directed, During the late War Between the States, published in 1874. In it, he defends his actions against critics, Davis in particular. $375.

Next is an item commemorating a great celebration with a notable provenance. Item 149 is The Railroad Jubilee: An Account of the Celebration Commemorative of the Opening of Railroad Communications between Boston and Canada, September 17th, 18th, and 19th, 1851. The opening of a railway from Boston to Montreal was a cause for major celebration, connecting the nations by rail. President Millard Fillmore came to Boston to deliver a speech. The Senate's greatest orator, Massachusetts Senator Daniel Webster, gave one too. The celebration continued for three days. The connection was significant for shipping. It boosted trade between England and Canada, it being faster to ship through the Port of Boston and by rail to and from Montreal, all good for Boston commerce. From Montreal, shipments could then be made to the West. This account of the Jubilee was published in 1852. It was the personal copy of Daniel Webster, containing his bookplate and ownership signature. Webster died later during its year of publication. $450.

This next book is a biography of Button Gwinnett. Who was Button Gwinnett? If you are a collector of what is known as "signers," you know Button Gwinnett well. Otherwise, you probably do not. "Signers" refers to people who signed the Declaration of Independence, which he did as a representative of Georgia to the Continental Congress. Indeed, his signature can be found atop the leftmost column. His signature is likely the most desirable of all signers, perhaps even more so than John Hancock. The reason is that there are so few of them around. Most of the signers were significant personalities who signed many documents over the course of their lives. Gwinnett was fairly obscure in the years before the Declaration, and the year after, he engaged in a duel with a political rival, was shot and died. His signature is the hardest to obtain of all the signers. Item 73 is Button Gwinnett, Signer of the Declaration of Independence, by Charles Francis Jenkins, published in 1926. Gwinnett County, which includes some of Atlanta's suburbs, is named for him. $150.