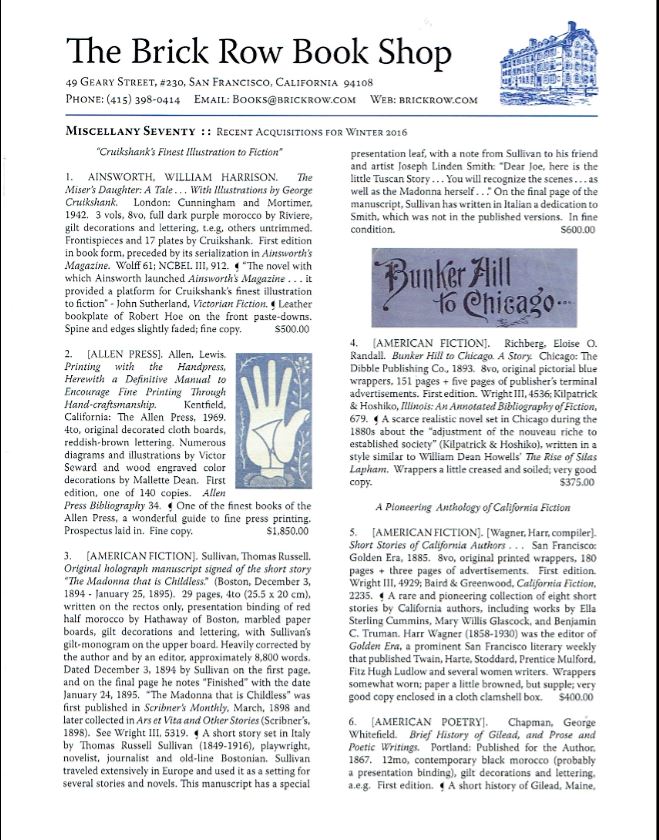 The Brick Row Book Shop has issued their Miscellany Seventy: Recent Acquisitions for Winter 2016. This is certainly a miscellany, more specific descriptive words hard to find. There is a lot of antiquarian literature and poetry, and other things too. We will describe a few items and leave it to others to pigeonhole them better than can I.

We will begin on a most patriotic note. Item 61 is a copy of the November 1814 issue of the Analectic Magazine. "Analectic" is not some sort of unhealthy condition but means selections from literary works, just in case you didn't know. Within this issue of the Analectic Magazine was a poem entitled The Defence of Fort M'Henry. This poem had previously appeared in newspapers or on broadsides, but this was its first appearance in anything of the level of permanence of a magazine. It recounts the American defense of Fort McHenry despite British bombardment during the War of 1812. Through the long perilous night, the American flag continued to wave, a signal that the fort had not fallen to the enemy. Does this sound familiar? Of course. A little later, Francis Scott Key's poem was put to music, the name changed to the Star Spangled Banner, and America not only had a victory in battle, but a new national anthem as well. Priced at $2,750.

From a patriotic poem we turn to a poem by a patriot. Supposedly by a patriot. Not likely by a patriot at all. The title is The Religion of the Sun, A Posthumous Poem, of Thomas Paine. Common sense tells us Paine wasn't writing any poems after he died, but this one was supposedly found in a secondhand bookshop, written before Paine became posthumous. It contains a preface by S. Y. A., who supposedly found it. S. Y. A. was evidently Samuel Yorke Atlee, and most people quickly suspected fraud, with Atlee likely being the writer rather than the finder. Paine was a poet as well as a prose writer, though few remember him for those writings. He was considered a decent poet, but Brick Row describes this poem as "a long and fairly incomprehensible poem..." It has to do with civilizations on the sun and on planets, quite fantastical. Item 68. $450.

Next up is a very early version of a road atlas. Item 12 is S. S. Moore and T. W. Jones' The Traveller's Directory: Or, a Pocket Companion, Shewing the Course of the Main Road from Philadelphia to New York... This is the 1804 revised second edition, after the first of 1802. It is focused on Philadelphia, with descriptions of the towns and cities covered, but mainly of Philadelphia. The revisions of the second edition focus on updated text about that city. Along with the text are 38 strip maps of the routes to Washington and New York. They are similar to those old TripTik maps AAA used to provide (maybe they still do). The maps show adjacent towns, crossroads, bridges, inns, and other landmarks useful for travelers in the days when their slow-moving cars were pulled by horses. $8,500.

Item 40 comes from the pen of the inimitable 17th century travelogue writer Thomas Coryate: Coryats Crambe, or His Colwart Twise Sodden, and Now in with Other Macaronicke Dishes, as the Second Course to His Crudities, published in 1611. The "second course to his crudities" refers to his travel book, Coryats Crudities. Coryate was a minor court official who undertook a five-month tour of Europe. That doesn't sound unusual today, but in those days, people traveled for particular purposes, but not just as a tourist. His travel account was one of the first such books. Coryate succeeded in getting dozens of notable writers to provide comments for his book. What he didn't understand is that his "friends" also thought him a fool, and their comments were subtly, sometimes not so subtly, mocking. As this strange title suggests, Coryate was subject to bouts of buffoonery. His Crambe, the rarest of Coryate's books, was written to promote his Crudities and to protest a pirated edition of the preliminary section of that book, which had the added indignity of saying that this portion was the only part worth reading. This book includes poems from notable writers, including Ben Jonson, but they too make fun of poor Coryate. $4,500.

Most people are aware that at the turn of the twentieth century, the automobile began to appear, soon to overwhelm the horse and carriage as the favored means of transportation. Less remembered is that there was a turning away from the horse even before the advent of the automobile, during the last few decades of the nineteenth century. The popular new means of transportation then was the bicycle. They were so popular that books of poetry were written about them. Item 8 is Wheel Songs: Poems of Bicycling, by S. Conant Foster, published in 1884. It is a collection of 20 poems related to bicycling. $875. Item 10 is Lyra Cyclus or The Bards of Bicycle... compiled by Edmond Redmond (great name), published in 1897. It contains over 150 poems about bicycling culled from newspapers and magazines. $425.

The Brick Row Book Shop may be reached at 415-398-0414 or books@brickrow.com. Their website is www.brickrow.com