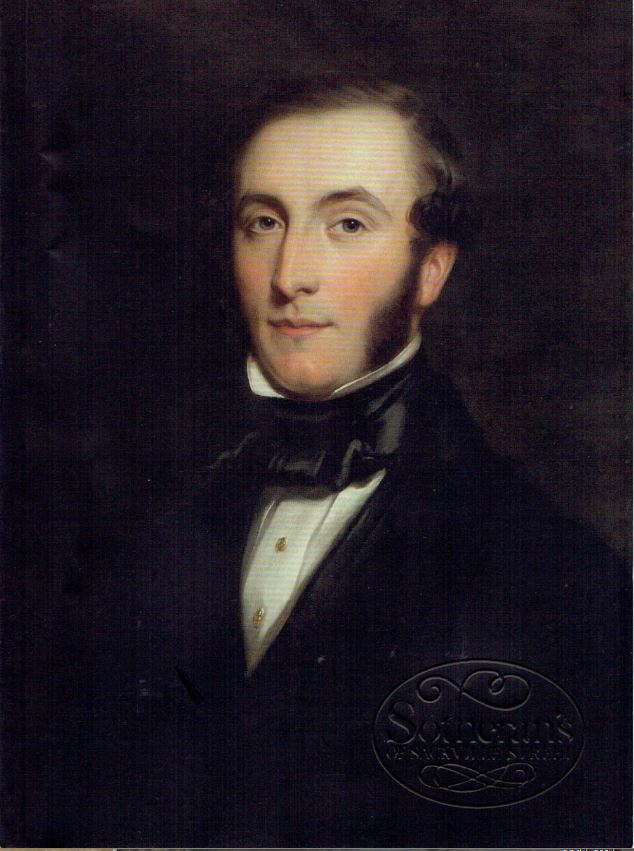 Sotheran's (Henry Sotheran Ltd.) has released a catalogue of Highlights. Two Hundred years of bookselling in London 1816-2016. Since the firm began in London in '16 and this is the year '16, it contains only 16 items. Still, they are worth their own catalogue. Sotheran's actually isn't that young, having started in York in 1761. However, its most notable run began 200 years ago when Thomas Sotheran set up shop in London. That is Thomas Sotheran's picture on the cover of the catalogue. He passed on 150 years ago, but left heirs to continue the tradition for years to come. Here are some of the 16 books offered.

The first item in the catalogue is a groundbreaking work in the field of anatomy. Not to sound over the top, but Printing and the Mind of Man said, "No other work of the sixteenth century equals it." The title is De humani corporis fabrica libri septem, the author Andreas Vesalius. The anatomical beliefs of Galen, then 1,400 years old, were still accepted when this book was first published in 1543. Galen had done the best he could, but human dissection was not permitted in his time. He could only look at animals. Vesalius actually observed the anatomical features about which he wrote, overturning many of Galen's 1,400-year-old unquestioned claims. Item 1 is a copy of the second edition of the book, published in 1555. The quality of the printing and typography were improved for this edition, making it, in Sotheran's words, "the definitive version." Item 1. Priced at £90,000 (British pounds, or roughly $130,146 in U.S. dollars).

Next up is one of the most collectible of literary works of the twentieth century. This book is a day in the life. Item 14 is Ulysses, the first edition published in 1922. James Joyce's work was deemed obscene by English censors, forcing him to locate a printer in France, where attitudes were more liberal. Sylvia Beach and her Shakespeare and Company took on the challenge. Offered is one of 750 numbered copies on hand-made paper (out of a print run of 1,000). £39,500 (US $57,118).

The year 1776 was a memorable one in America, but along with the birth of a nation came the birth of modern economic theory. That year, in Scotland, Adam Smith published his economic theories in An Inquiry into the Nature and Causes of the Wealth of Nations. It was an argument for modern capitalism, not totally unrestrained, but as the basic generator of national wealth. Smith believed that the invisible hand of enlightened self-interest would result in greater prosperity for all. In his day, the free trade Smith advocated was often blocked by tariffs between nations and other governmental interference. The importance of his theories would soon come to the fore as the more developed nations would be making the transition from primarily agrarian to industrial societies. Item 7 is a first edition of Smith's work. £120,000 (US $173,619).

Travelogues by travelers who were tourists more than explorers would become popular books during the 19th century, but private tourists were virtually unheard of during the early 17th century. Thomas Coryate was an exception. He was employed by the court of Prince Henry, not a particularly important functionary, when he decided on his own to do a tour of Europe. Such travels without a particular purpose was then a new idea. He spent five months in Europe during 1608, and on returning home, decided to write and self-publish a book about his experiences. Published in 1611, that book is Coryats Crudities. Hastily Gobled Up in Five Moneths Trauells in France, Savoy, Italy, Rhetia... He even managed to get commentary verses from 60 notable writers of the time, such as John Donne and Ben Jonson, to add weight to his book. That said, it must be noted that many of them were subtly ridiculing Coryate, who was seen as more of a buffoon than serious person by his contemporaries. Pforzheimer described this as "each contributor vying to mock poor Coryate with solemn ridicule." Pforzheimer goes on to say, "There probably has never been another such combination of learning and unconscious buffoonery as is here set forth... His adventures probably appeared to his contemporaries as more ridiculous than exciting..." Nevertheless, he acknowledges that the book provided an account of the cities of Europe that was at least as valuable as it was amusing. Item 2. £17,000 (US $24,657).