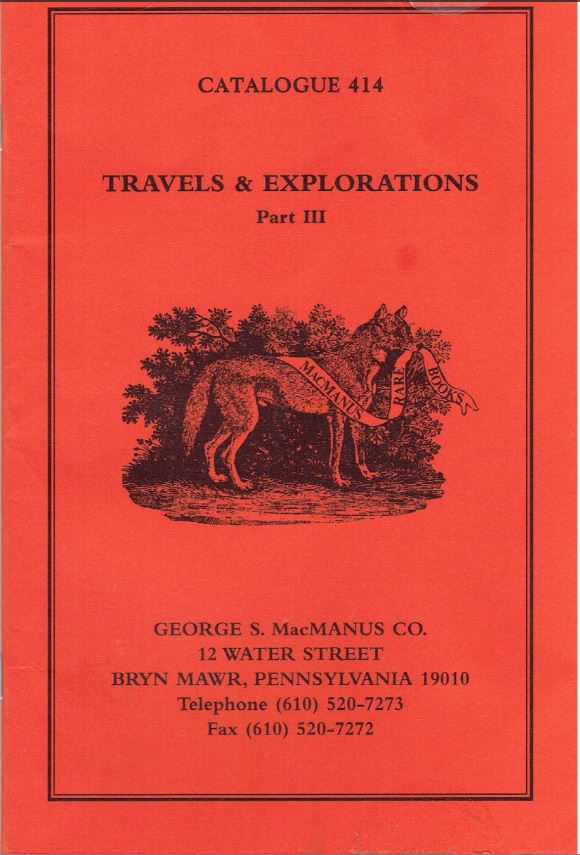 The George S. MacManus Company has issued their Catalogue 414 Travels & Explorations Part III. While there is no limitation expressed as to the nature of these journeys, we can say that they are overwhelmingly American, either travels within or to America, or by Americans overseas. Many of those in America were visits by Europeans, some early explorers, others came after independence, curious to see what this new country was all about. Some were impressed, others not. One thing we can say definitively is that if you collect American travels, this is a catalogue you will want to see. It is filled with important and obscure accounts of American explorations, filling holes in existing collections, or providing the beginnings of new ones. Here are a few samples of what is to be found.

If you were looking to go west, well before the Gold Rush or even the Oregon Trail, this is the guide you wanted: The Navigator: Containing Directions for Navigating the Monongahela, Alleghany (sic), Ohio, and Mississippi Rivers... published by Zadok Cramer of Pittsburgh. This is the 1808 edition, styled the sixth edition, new and improved, though only three prior editions are known, published at two-year intervals beginning in 1802. These were the days when going west meant traveling down the Ohio as far as the Mississippi. Before the Louisiana Purchase, that was America's western border. However, by the time of this issue, the Louisiana Territory was American and Lewis and Clark had recently returned from their journey to the Pacific Northwest. This edition adds an appendix describing their travels up the Missouri and Columbia Rivers. It would still be years before the official account of Lewis and Clark would be published, but Cramer had published the first account of it by a participant, that of Patrick Gass. Cramer used Gass' material to supplement his western guide. The book also contains 28 woodcut maps of the river routes. Item 20. Priced at $17,500.

Even before Lewis and Clark rode up the Missouri River, French visitor Francois Marie Perrin du Lac made the journey. Maybe he made the journey. More likely not. He may have "borrowed" his account. According to Howes, "that information was probably obtained from Pierre Menard at St. Louis and there is little doubt that Du Lac lied like a horse-thief in claiming to have gone on a trading expedition up the Missouri." Perrin du Lac's map was described by Wagner as "the earliest published map of the Trans-Mississippi region which can be said to display even the faintest resemblance to accuracy." While this is undoubtedly true in terms of a printed map, this was evidently borrowed as well, from Jacques MacKay, who traveled the area in 1796. It was MacKay's map that Lewis and Clark took on their journey. That said, the information is of importance to describing trade and the natives of the territory in the earliest of times. Perrrin du Lac's book, written in French, was published in 1805 in Lyon and Paris, Lyon having precedence. This copy is from Lyon. The title is Voyage dans les Deux Louisianes et chez les Nations Sauvages du Missouri... Item 64. $5,500.

Next is An Account of Monsieur de La Salle's Last Discoveries in North America, the first English edition of 1698, published a year after the first was in Paris. The author was Henri de Tonti, who served directly under La Salle during his explorations. He was stationed at Fort St. Louis along the Mississippi by La Salle. La Salle went back to Canada, but on his return, Tonti accompanied him down the Mississippi to the Gulf of Mexico. La Salle then returned to France, while Tonti went back to the fort. La Salle would return from France, this time directly to the Gulf of Mexico to start a settlement, but went past the Mississippi and settled in Texas. That did not go well, and when Tonti heard that La Salle was trying to come back up the Mississippi, he started down river in hopes of finding him. He did not. He could not have. La Salle had been killed back in Texas by his own men. Tonti denied being the author of this book, but it is believed to be based on his letters written during this time. Item 122. $22,500.

Here is one of those private accounts from a foreign visitor to America's shores. It wasn't nice. Mrs. Frances Trollope traveled to America while her husband was working in Cincinnati, and then did some touring around the land. She gives her opinion in Domestic Manners of the Americans. It includes humorous drawings of Americans displaying their manners, or more accurately, their lack thereof. Streeter described the book as, "A minor classic of looking down one’s nose." Lathrop Harper wrote, "The style is excellent and in spite of its prejudiced tone is of value to those who can bear criticism with a calm temper." Howes said, "Never did a book of British disapproval of our social and national life so anger the American mind." But, therein lay its success, as Americans bought it up to get angry. Offered is a third edition from 1832. Item 127. $250.

Time for some balance. Item 213 is Travels in the United States. Etc. During 1849 and 1850. The author of this book, published in 1851, was Lady Emmeline Wortley. She liked America, thought it a fine place. Lady Wortley was well off, so perhaps she saw the better side of society, but after Mrs. Trollope's savaging, this was a welcome contrast. Lady Wortley did much traveling, particularly after her husband died in 1844. In 1855, she traveled to the holy land, was kicked by a mule, fracturing her leg, pushed on over an untraveled road, and died in Beirut. $2,500.