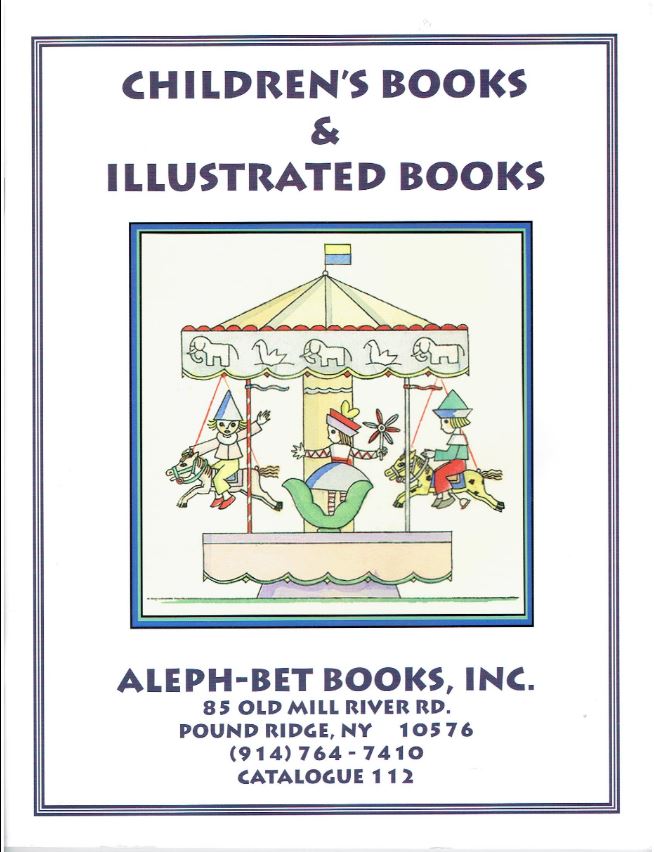 Aleph-Bet Books has released their Catalogue 112 of Children's Books & Illustrated Books. Aleph-Bet's catalogues are always a treat. Every item, and there are over 500, is illustrated in color, and most of the books are filled with fun and wonder. A few convey some truly ugly prejudices of their time, but those are the fault of adults, not the children who received them. While most children's books do not survive the years well, because, after all, they were handled by children, these are almost universally in excellent shape. Here are a few of them.

We will begin with a book written for some of the youngest of readers, but don't let the little ones get their dirty hands on this copy. Item 314 is a first edition of the first Pooh book, When We Were Very Young. This is from a limited run of 100 copies that were signed by both author A. A. Milne and illustrator E. H. Shepard. Each actually had names, but preferred to use their initials. However, Shepard did sign this book as "Ernest." The limited edition was printed on hand-made paper to sharpen the quality of Shepard's drawings. Priced at $16,000.

Here is another classic first, the rare first edition, first issue of Dr. Seuss' Green Eggs and Ham. This is the "Beginner Books" issue with the sticker "50 word vocabulary" applied to the front of the dust jacket. This is an exceptional copy. Yes, Sam, it is. Item 451. $4,750.

H. A. Rey will forever be most associated with Curious George, but he wrote many other books. This one is a beginner's guide to astronomy, The Stars: A New Way To See Them, published in 1952. It includes numerous illustrations of the stars and constellations, also done by Rey. The dust jacket is a double folded chart which when opened displays the constellations of the Northern Hemisphere. This being a presidential year, Rey's inscription is most timely – "To Adlai Stevenson. May his star rise!" Stevenson was the Democratic nominee for President in 1952 and 1956, who had the misfortune of having to run against World War II hero Gen. Dwight Eisenhower. Rey dated his inscription November 30, 1952, so hopefully it cheered up Stevenson a bit from his loss a few weeks earlier in his first presidential campaign. Item 422. $1,750.

The image on the cover of this catalogue comes from the Hebrew children's book Sefer Hadvarim (book of things). It contains 16 poems by Hayim Bialik and illustrations by Tom Seidmann-Freud. "Tom" was Martha Gertrude, but adopted the name "Tom." She was also the niece of Sigmund Freud. Together with Bialik and her husband, Jankew Seidmann, they formed the publisher Ophir, which published this book in 1922. Their books, this one in particular, are hard to find. They would be banned by the Nazis. The ending was tragic as Ophir went bankrupt, Jankew Seidmann took his own life, and Tom Freud became deeply depressed and died of an overdose of sleeping pills. These were bad times in Germany. Item 207. $4,000.

Next up is a book of humorous verses, Tails with a Twist, "verse by a Belgian Hare," published in 1898. The Belgian Hare was Lord Alfred Douglas, better known for his tragic relationship with a much better writer than was he. Douglas was the lover of Oscar Wilde. Wilde was attacked by Douglas' father, the Marquess of Queensberry, and sued for libel. Wilde lost big time, was sent to prison for two years, and emerged a broken man, dying three years later in exile from his native England. Douglas himself would end up in a libel suit for claims made about Winston Churchill, no less, years later and spent time in prison himself. However, while not the nicest of characters, his verses are mildly amusing, such as – "Few birds or beasts are more unpleasant / Or more malicious than a pheasant." Item 345. $200.

Here is an odd tale that must have given some kids nightmares. The title is The Story of Little Degchie Head, published in 1903. It's about the strange experiences of little Mary. Aleph-Bet explains, "When she accidentally burned off her head, the houseboy Domingo replaced it with a pot (called a degchie in India) painted with a face." It evidently was not much of a face, so Santa supplied her with a doll's head as a replacement, a step up. The author of this odd tale was Helen Bannerman, better known for her controversial (today) character of Sambo. Item 43. $600.

Item 106 contains the first appearance in book form of the best known Christmas poem (in English, anyway). It also is the first printing to identify its author. Item 106 is The New York Book of Poetry. It was published, fittingly, in New York in 1837. One of the poems is A Visit from St. Nicholas. It had been printed before in a newspaper and almanacs, but anonymously at the time. The author is herein identified as Clement Moore. The poem remains popular today, though it is now usually referred to as The Night Before Christmas, its opening line. Item 106. $2,000.