A Selection of Artistic Books from Librairie Michel Bouvier 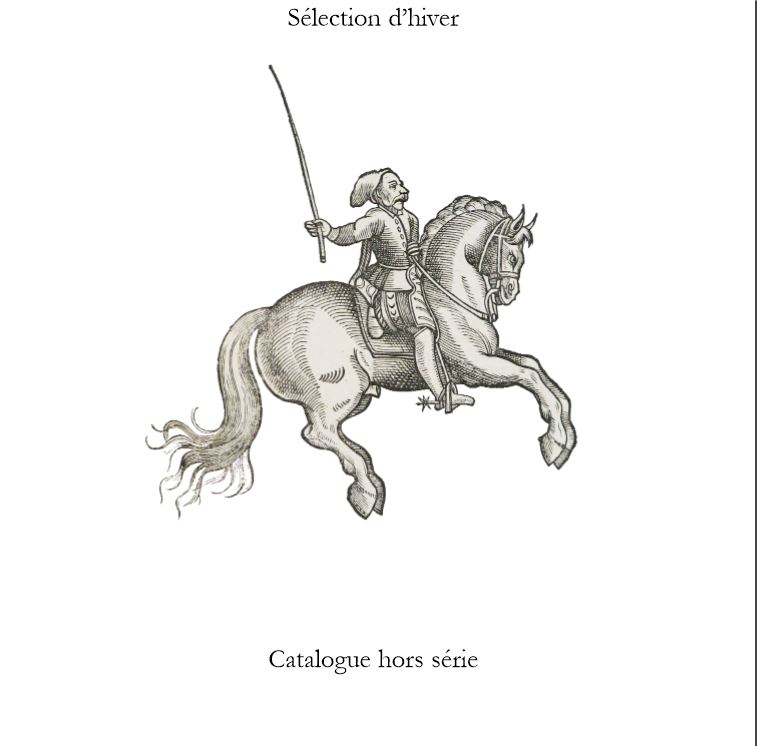 This month we received our first catalogue from Librairie Michel Bouvier. Michel Bouvier has been in the trade for 40 years and operates in a most traditional, and perhaps today unusual way. Librairie Michel Bouvier has a bookshop in the heart of Paris, and sells through catalogues and their website. They do not participate in the major book listing sites, finding that the essence and charm of books is lost in the mass of listings. This latest catalogue is entitled Sélection d'Hiver (Winter Selection), and contains material that is both textual and artistic, and quite old. Here are a few samples.

We begin with one of the earliest, and most notable manuals for training horses in its day. Federico Grisone was an Italian nobleman who set up a school for training and riding horses in Naples in 1530. His name is often associated with dressage, the art of show riding. Offered is the first German edition of his notable work, Künstlicher Bericht und allerzierlichste Beschreybung, published in 1570 (the original was published in Italian in 1550). The book contains all sorts of information about horses and riding them, from breeding and caring for their medical issues, to riding them for show or in battle. It contains many woodcuts, showing the training of horses, tournaments, their anatomy and equipment. On the downside, Grisone's methods of training horses often involved cruelty to force them to behave as he wished. The book was very popular in its time, being printed in dozens of editions in numerous languages during the century after it was first published. Item 2. Priced at €6,000 (euros, or approximately $6,680 in U.S. dollars).

Olfert Dapper was a Dutch physician and travel writer of the second half of the 17th century. He signed himself as a medical doctor although there is no evidence he was actually so trained. That is appropriate enough as Dapper was a travel writer who never left his home country. However, he assiduously researched his work and corresponded with travelers, while taking an unbiased view of the places he described. The result is that his writings were unusually accurate despite his lack of first hand experience. Dapper is best known for his book about Africa, but this one concerns an attempt by the Dutch to establish trade relations with China in the 1660's. Item 6 is Denkwürdig Bedrijf der Nederlandsche Oost Indische Maetschappye op in Kuste in het van Keizerrijk Taising of Sina. It was published in Amsterdam in 1670. Dapper's descriptions of China came from two missions by the Dutch East India Company. Balthasar Bort conducted two expeditions along the Chinese coast in 1663 and 1664, most of his time spent in Taiwan. A few years later, Pieter von Hoorn attempted to set up a mission in China. If it sounds like these must have been long journeys, they emanated from the company's location in Batavia (today Jakarta, Indonesia), not the Netherlands. Von Hoorn's attempt to establish trading relations was not successful, but did provide us with the information for this book. €5,000 (US $5,573).

Johann Elias Ridinger may not be a household name today, but he was an exceptional artist of the 18th century. Born in 1698, he began training as a painter at the age of 14. A few years later, he moved to Augsburg where he began drawing animals, horses in particular. This would lead to something of a sabbatical where he spent a few years hunting and riding, only to return to Augsburg to learn etching and engraving. Finally, at the age of 25, he opened his own studio and publishing house, where he sold prints of his artwork. He remained focused on animals, including wild ones as well as horses. Over the course of his 69-year lifespan, Ridinger created 1,600 engravings of animals. Obviously, his work was very popular. His style is generally referred to as rococo, there being a certain flair and drama to his drawings. Item 8 is a complete set of four engraved prints of hunting scenes by Ridinger, each with trilingual poems (Latin, German, and French). Among the animals dramatically presented in the hunt are dogs, bear, deer, boar, and quail. Item 8, circa 1730. €7,000 (US $7,811).

This next item comes from one of France's greatest writers, but it is neither a book nor a manuscript. It is a drawing. Victor Hugo is better known for Les Misérables and (the Hunchback of) Notre Dame de Paris. However, he was a talented artist, and some believe he might have been the greatest of his time were he not primarily a writer, art being a hobby. Item 16 is one Hugo's drawings, done in black and brown pen and ink wash, without color, as typical of most of Hugo's paintings. This one was done on a trip to Bruges, Belgium, in the late summer of 1837. There is a signed inscription at the bottom, difficult to read, but likely points to the time and place of the landscape scene. Hugo had traveled to Belgium with Juliette Drouet. Hugo was devastated a few years earlier when he found his wife had cheated on him, but was pulled from his despair by Drouet, his secretary and love, with which he would remain close for the remainder of their lives. €85,000 (US $94,854).