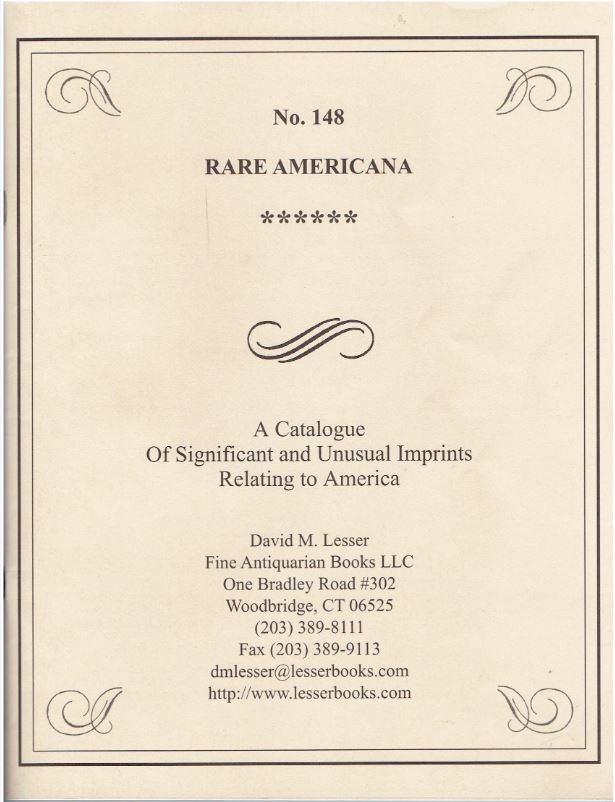 David M. Lesser Fine Antiquarian Books has issued catalogue No. 148 of Rare Americana, their first for 2016. Lesser's catalogues feature primarily shorter form material, such as pamphlets and broadsides, are overwhelmingly from the 18th or 19th century, and are connected to America, generally in subject matter though occasionally we may find an American edition of something pertaining to another country. Subjects vary, ranging from the political and theological controversies of the day to terrible murders and other crimes. This material is fascinating, often entertaining, and revealing in what it tells us about people's interests and concerns in earlier times. Here are a few samples.

American politics is always fun, in a twisted way, especially during presidential years. Item 27 is a collection of 23 pamphlets and broadsides, including four in the German language, promoting the election of Democrat Grover Cleveland in 1884. They endorse Democrats as friends of labor and immigrants. This was the year in which a supporter of Republican James G. Blaine labeled the Democrats the party of "Rum, Romanism, and Rebellion," an anti-Catholic alliteration that did not play well with Irish immigrants. One pamphlet, making the most of a corruption scandal that dogged Blaine, claims, "As a friend he was false to his friends; as a swindler he was false to those associates whom he helped to swindle the government..." Blaine's campaign would respond by emphasizing Cleveland's fathering a child out of wedlock. This was probably the dirtiest political campaign prior to the one we are experiencing in 2016. Ultimately, the electorate decided sins of the flesh were the lesser evil to sins of the wallet and chose Cleveland. Priced at $375.

During the period of the American Revolution, some of the strongest calls for independence came from the pulpit. Some preachers, naturally, supported the British, but others were leaders in the cause of freedom. There were few as vociferous in their views as Rev. Moses Mather. Moses Mather was from the famed family of preachers, descended not from Cotton, or his father Increase, but from Cotton Mather's grandfather and the first in the line of American clergymen, Richard Mather. Rather than hanging around the Massachusetts colony, his side of the family moved on to Connecticut, and were not among the clergy until Moses was ordained. He was hired by the Congregational Church in Darien, Connecticut, and stayed for 64 years. Item 68 is Moses Mather's America's Appeal to the Impartial World, published in 1775. In it, he argues for the natural rights of Americans, including that of defending those natural rights from encroachments by British authorities. Once independence was declared the following year, Mather preached on behalf of the revolutionary cause, earning himself a couple of trips to a British prison in the process. $3,750.

Here is a clergyman who had a different point of view about the Declaration of Independence. He was not a contemporary of the Revolution, writing about the Declaration from hindsight, 80 years later. Nor was Rev. Thomas Smyth upset with declaring independence. No, it was that odious line about all men being created equal that upset Smyth. He was a South Carolina preacher at the dawn of the Civil war, and that equality thing did not comport well with his defense of slavery. He preached about the subject in 1860, a sermon entitled The Sin and the Curse; or, the Union, the True Source of Disunion, and Our Duty in the Present Crisis. Speaking of the concept of all being created equal, Smyth claims that "the evil and bitter root of all our evils is to be found in the infidel, atheistic, French Revolution, Red Republican principle, embodied as an axiomatic seminal principle – not in the Constitution, but in the Declaration of Independence." Item 91. $450.

I'm not sure whether Henry Leander Foote merited an autobiography, but he wrote one nonetheless: A Sketch of the Life and Adventures of Henry Leander Foote, Sentenced to be Hung in New Haven June 19, 1850...for the Murder of Miss Emily Cooper. Foote tells us about his service in the Seminole Wars in Florida and a visit to South America before getting to the matter at hand. Evidently, Mr. Foote became ensnared by sexual obsession, which he blamed on prostitutes, alcohol and "bad books." Of course, it was the fault of books, not Mr. Foote. That obsession was such as to lead him to rape and murder his 15-year-old cousin, Emily Cooper. Lest you think Foote was all bad, he performed an act of great kindness to his mother to spare her from hearing about what he had done to his cousin. He killed her too. The jury was not swayed by this act of generosity. They performed the same act of mercy on Foote that he performed on his mother, only with a rope. Item 38. $600.

Here is another murder, but one that engendered a bit more sympathy for the killers. Nevertheless, the outcome was the same. Dr. Perry Talbott was a leading citizen of Nodaway County, Missouri, when he passed from this life, with a push, in 1880. Not only was he a physician, but a speaker, writer, and political leader as well, a proponent of the Greenback Party, an enemy of bankers. However, he had a dark side. He was cold, even abusive, to his family of a wife and 12 children. He was also miserly, leaving them to live in poor conditions despite his prestigious position. They didn't much care for him, his wife included. One evening, a shot rang out and Dr. Talbott lay mortally wounded. Before dying, he claimed he believed it must be one of his political enemies who shot him. Whether this was true, or a last, repentant act of mercy toward his family, is unclear. The family's unconcerned reaction drew some suspicion, and a private investigator called in elicited a confession from his sons Albert and Charles. At trial, they denied it all, and Mrs. Talbott supported their story, but the jury did not believe them. They were convicted. Later, Charles issued a confession, claiming that he shot his father after finding him beating up her mother. The execution was temporarily postponed and sympathy grew among the public which understood the doctor was not much of a father. However, when the Governor refused another delay, and Albert then contradicted Charles' story and said they were completely innocent, many lost their belief in, and sympathy for the brothers. They were hanged. According to the New York Times, a large crowd came to the execution, replete with baskets of food for a picnic. "A more repulsive sight...could scarcely be imagined." Item 103 is The Talbotts. History of the Assassination of Dr. P. H. Talbott, and the Trial of His Two Sons Albert P. and Charles E. Talbott, for the Murder, published in 1881. $650.