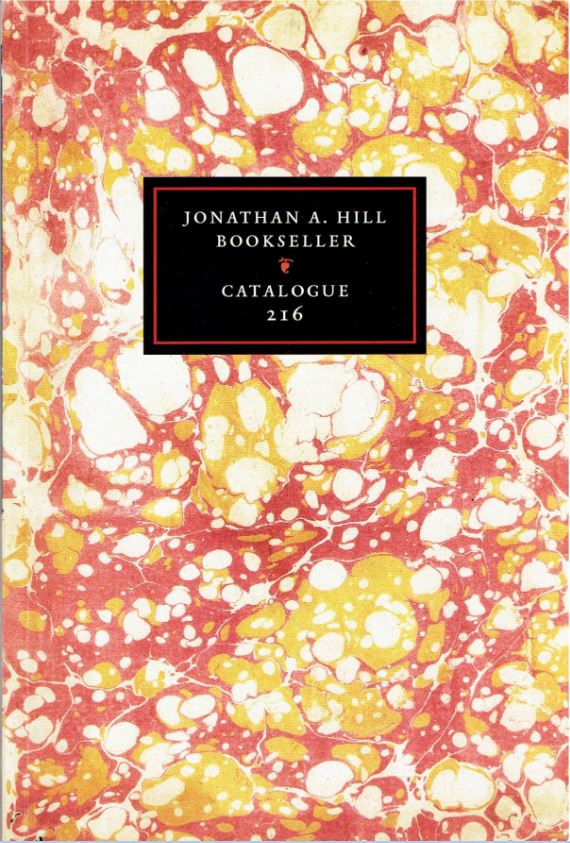 Jonathan A. Hill Bookseller has published Catalogue 216 of Mostly Recent Acquisitions. Offered is a mix of material hard to describe, other than it is all quite old, generally early 19th century and older. Among the topics we find science, architecture, and medicine. There are several treatises on the medicinal properties of various spring waters from the days when many believed they contained the cures for a myriad of ailments. Then we find much material of a bibliographic nature, including catalogues of notable collections as well as auction catalogues of sales of great collections of two or three centuries ago. The most frequently appearing language represented is French, but others, including English and German, can readily be found. Here are a few samples of what we found among these recent acquisitions, but it can only provide a glimpse at what is inside.

We begin with a book from the early days of aeronautics. In the 1780's, long before airplanes, ballooning became a craze. Europe was the center of early attempts, though some Americans got in on the action. Benjamin Franklin was a notable proponent of lighter-than-air flight. However, England was a bit slow. The first manned balloon flight in England was actually performed by an Italian, Vincenzo Lunardi, in 1784. The following year, he loaned his balloon to Thomas Baldwin, who provided a detailed account of his two flights in 1786 in Airopaidia: Containing the Narrative of a Balloon Excursion from Chester, the eighth of September, 1785... His book ranges from the poetic in its description of what he observed to technical aspects of flights and recommendations Baldwin makes. However, what is most notable about this book is it provided the first illustrations of earth taken from the sky. Baldwin notes that everything seems flat, like a map, even though there are hills and such down below. It was a partly cloudy day as part of the earth's surface in his drawings is obscured by clouds below. The views of earth were created from sketches Baldwin made while in the air. Item 38. Priced at $4,500.

This next book describes some major scientific discoveries, though the discoverer himself has been surprisingly forgotten. Item 61 is Expériences sur les Végétaux, spécialement sur la propriété qu'ils possèdent à un haut degré, soit d'améliorer s'air quand ils sont au soleil, soit de le corrompre la nuit... This roughly translates to experiments on plants, particularly their property of improving air when in the sun, and corrupting it at night. The book was published in 1780 and the author was Dutch scientist Jan Ingenhousz. What Ingenhousz discovered was photosynthesis, as well as the fact that plants breathed during the night. Joseph Priestly had discovered a few years earlier that plants could restore air unfit to breath because of combustion, that is, the removal of oxygen. Ingenhousz was first to realize that it was only the green parts of plants that had this capability. Additionally, he discovered this only happened in the presence of sunlight. Meanwhile, at night, plants gave off carbon dioxide, like breathing animals. Finally, he determined that the amount of oxygen given off during the day was greater than the amount of carbon dioxide released at night. From this, he was able to deduce that part of plants' structure was composed of gasses absorbed from the air, not just from the ground. $1,250.

Here is one of those auction catalogues, and it presented the collection of a man noted for more than book collecting. Item 17 is Catalogue de Livres provenant des Bibliotheques du feu Roi Louis-Philippe (1852) bound with Catalogue de Livres provenant de la Bibliotheque du Chateau d'Eu (1853). This was the sale of the library of Louis-Philippe, the former King of France, who died in 1850. He succeeded Charles X, a reactionary, unpopular monarch who was forced to abdicate in 1830. Louis Philippe was welcomed by those seeking democratic reforms and a benevolent monarch, but in time, he too became authoritarian and unpopular. He was also forced to abdicate, in 1848, and lived the remaining two years of his life in England. Louis Philippe built himself an excellent collection, featuring illuminated manuscripts, early printed books, and fine bindings, which were sold at auction. $1,500.

This next auction catalogue dispersed the collection of a fascinating woman, one of the great women collectors of the age, the turn of the 18th century: Catalogue des Livres de feue Madame la Comtesse de Verruë... Jeanne Baptiste d'Albert de Luynes, the Countess of Verruë, was evidently an honorable lady, but circumstances, and her family, worked against her virtue. She made the most of her situation. She was born to a family of solid means, related to royalty, and close to the government. The Countess was well educated. In 1683, she married the Count of Verua, a handsome, honorable diplomat. She was just 13 years old at the time. They had four children, and all seemed well. However, the Count worked for the Duke of Savoy, who took a shine to her. He made passes at her, she honorably avoided them, only to find her mother-in-law pushing a liaison, her husband going along. Eventually, she consented, had two children with the Duke, her husband later died in battle, and the Countess did well financially. By the time she died, she had a magnificent collection of art, furniture, and 18,000 books. Despite the large number of books, they were combined so as to be sold in just 389 lots. The auction took place in 1737, the year after she died. Item 36. $4,950.

Item 69 is the greatly expanded third edition of Traité Physique et Historique de l'Aurore Boréale... Published in 1754, this work of Jean Jacques d'Ortous de Mairan was the first extensive treatise on the Aurora Borealis. De Mairan was a scientist, studying astronomy and various subjects related to the sun, such as circadian rhythms. He understood the connection between the sun and the aurora, but his theory was that the sun's atmosphere at times extended into that of the earth, causing the effect. $3,000.

Jonathan A. Hill Bookseller may be reached at 646-827-0724 or jahillbooks@aol.com. The website is www.jonathanahill.com.