Artists' Books to Astronomy (and More) from The Kelmscott Bookshop 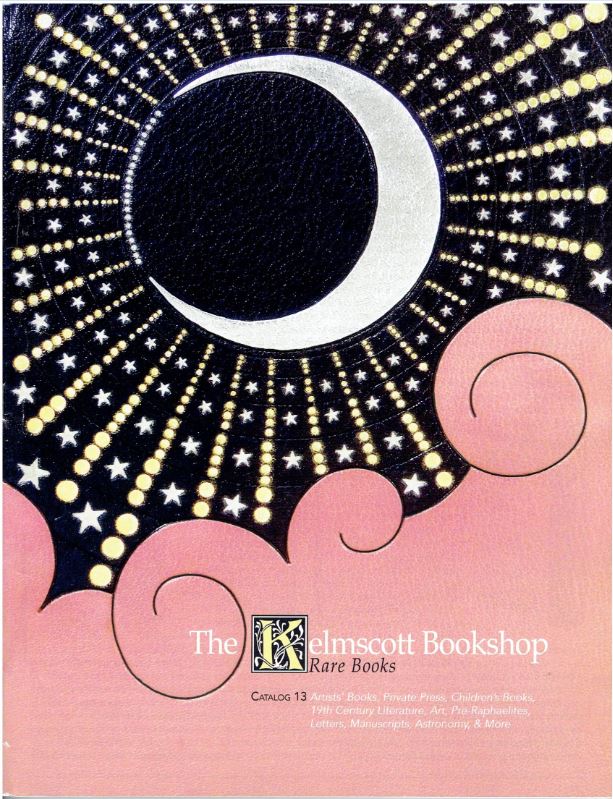 Catalog 13 from The Kelmscott Bookshop.

The Kelmscott Bookshop Rare Books has released their Catalog 13 – Artists' Books, Private Press, Children's Books, 19th Century Literature, Art, Pre-Raphaelites, Letters, Manuscripts, Astronomy, & More. That is a wide and unusual array of topics. The earlier material, artists' books and private press, is filled with recent publications, many from 2015. As you go farther back in the catalogue, you go back in time, reaching into the 19th century with literature, letters and manuscripts, and sometimes a couple of centuries even farther back. The range is as wide as the distance from artists' books to astronomy. Here are a few samples of the items to be found in this latest selection from The Kelmscott Bookshop.

We begin with a couple of recent examples of artists' books that push the meaning of the word "book" beyond its traditional definition. Item 6 is a set of miniature books, replete with its own miniature wooden bookshelf, created by the Bo Press in 2014. Miniature is no exaggeration for these books as they stand a mere one inch tall. The bookshelf, however, is twice that size. The books themselves are a set of six Jane Austen novels... sort of. How on earth can you jam a Jane Austen novel into a book this size? The answer is you can't. The pages are blank. Then again, so many people place books on bookshelves for decoration, rather than reading, why bother pretending? This is meant to be a work of art, not text. Priced at $175.

What is to be done with the millions of old, but not valuable books out there that no one wants? One answer has been to sell them by the foot as decorations for bookshelves, their text no more important than they are in the aforementioned Jane Austen "novels." Here is another solution – change them into something new. Item 36 is what is known as an altered book, created by Carol Owen in 2004. We let Ms. Owen describe an altered book: "I am often asked to describe altered books to people who are unfamiliar with them. I explain it this way: I start with an old, unloved book and transform it with paint, photos, and other embellishments. The end result is a book that has become a work of art, with pockets, niches, and secret compartments, enticing the viewer to keep turning pages." Ms. Owen is not alone in creating art from old books, and we think it's a great way to give new life to books that would otherwise be headed to the pulp mill. $350.

Here is a book by another individual who created original books, but in a different way. William Henry Ireland was a forger. His father was a great Shakespeare collector, and William appreciated the Bard as well. As he explained it, he started out by trying to fulfill his father's greatest wish – to have a document in Shakespeare's handwriting. William turned his father's wish into a business, as he continued to produce numerous manuscripts in Shakespeare's "hand." Although some people were dubious, he got away with it for a while. His downfall was to overdo it. He eventually created an entirely new play "written" by Shakespeare. It didn't measure up to his other works. Eventually, he confessed as otherwise suspicion would have fallen on his father. In 1805, Ireland wrote this book in an unsuccessful attempt to salvage his reputation: The Confessions of William-Henry Ireland. Containing Particulars of His Fabrication of the Shakespeare Manuscripts... This copy bears the bookplate of Elihu Root, Nobel Peace Prize winner and notable American statesman, who served as Secretary of State under Theodore Roosevelt as well as other high offices. Item 94. $350.

Item 123 is the History of Delaware County, and the Border Wars of New York. This is an interesting account of early Delaware County, in rural upstate New York, made even more interesting by the nature of its author. The "border wars" refers to attacks by Indians in what was an outpost in the wilderness in pre-revolutionary America. The book's author was a young surveyor, who spent several years in his trade in upstate New York. However, he was an ambitious young man, and at the time of its publication, twenty-year-old Jay Gould was just starting to enter his first major business venture – a tannery. Gould would become far better known for his investments in another industry, railroads, which began in the following decade. He would go on to become the ninth richest person in American history, according to Fortune Magazine. He also developed one of the worst reputations in the era of robber barons, using bribes and various forms of political influence to get his way and not showing much in the way of compassion for his employees. The book states it was published in Roxbury, New York, though Sabin says it was actually printed in Philadelphia. Sabin also reports that it is rare because most copies were destroyed in a fire, while Howes adds that Gould in his wealthy years wished to suppress the book, buying up copies and destroying them. $250.

This next book was written by a remarkable 19th century woman, and it comes under the topic of astronomy. Mary Ward (The Hon. Mrs. Ward) was a self-taught scientist, self-taught reflecting the virtual impossibility of a woman obtaining a scientific education in the 19th century. However, she came from a family of scientific developers in Ireland, was very smart, and gravitated to the field. Her specialties included studying insects and astronomy, the very small and very large. She wrote books on each subject, her target being average people rather than scientists, those wishing to learn about the field. Item 119 is Telescope Teachings, published in 1859. Her cousin had built the world's largest telescope at the time, so she had access to it to make observations. Sadly, the scientific curiosity of her family was also Mary Ward's downfall, and resulted in her being an interesting footnote in history. A couple of her cousins had built an early steam-powered vehicle. They believed it represented the future of travel, but while steam was used to power trains, its weight was such that it didn't work out for travel on the dirt roads of the day. One day, Mrs. Ward was riding in their car when she was thrown from it while rounding a curve. She fell under the wheels and was crushed, making Mrs. Ward the first fatality from an automobile accident. $175.