All Types of Books About Books from Oak Knoll Books 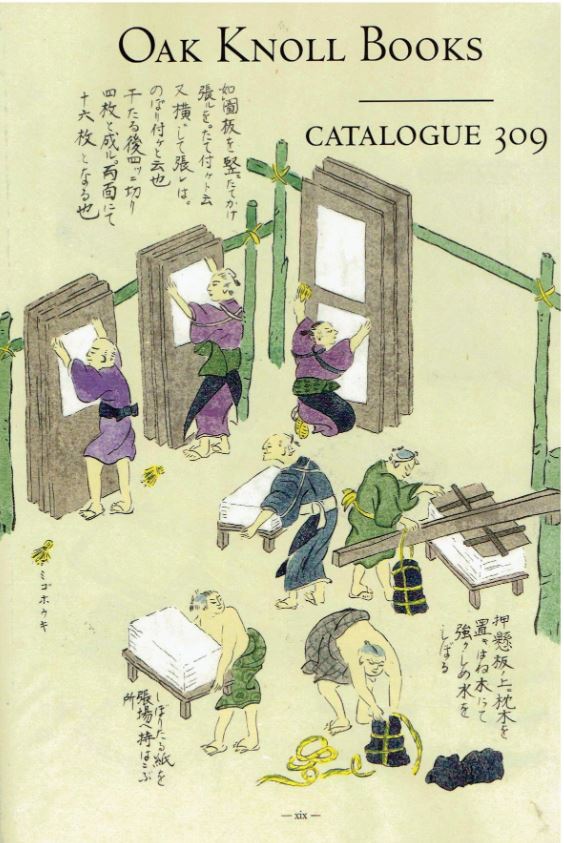 Oak Knoll Books has released their Catalogue 309 of "books about books." What that phrase means can be seen in the headings into which this catalogue has been divided: Featured Books; Bookbinding; Book Illustration; Book Selling, Collecting, and Publishing History; Calligraphy and Writing; Papermaking; Printing History; Type Specimens; Fine and Private Press; General Antiquarian; and Reference and Bibliography. All of the steps that take an idea and convert it into a printed book in the hands of a consumer are covered somewhere in this catalogue. Here are a few samples of these steps taken from the pages of Oak Knoll's 309th catalogue.

We will start with a very large item, and quite a set for the Limited Editions Club. The Club was founded in 1929 by George Macy, its heyday running through 1970 when it was sold by the Macy family. The idea was to publish fine editions of mostly classic works, illustrated by the great illustrators of the day. Naturally enough, the number of copies printed were limited, often signed by the illustrator or someone else involved in or related to its publication. Item 164 is the Limited Editions Club edition of the Comedies, Histories & Tragedies of William Shakespeare, 37 volumes in all, plus two volumes of Shakespeare's Poems. The Poems are signed by designer Bruce Rogers. The plays were edited by Herbert Farjeon from the First Folio and Quarto editions, even using original punctuation and capitalization, while correcting obvious errors. The list of illustrators is filled with many greats of the time, including Arthur Rackham, Eric Gill, Fritz Kredel, Valenti Angelo, and many more. The plays were limited to 1,950 copies, the poems to 1,500. The 39 volumes were published from 1939-1941. Priced at $2,000.

In the 18th century, booksellers frequently were more than just people who sold books. Just as newspapers of earlier times were often primarily proponents of a particular political point of view, booksellers commonly were the same. One of the most notable of second half of the 18th century England was John Almon, associated with the Whig Party of the day. Also common in the day, Almon was a publisher of some of the material he sold, and he pushed the boundaries of the law by publishing material not permitted. He fought for the right to fully publish debates from Parliament. It got him sent to prison a couple of times, as well as being in court for libel charges. Almon was also sympathetic to Americans during their revolution, which would not have gone over well with English authorities. Nonetheless, he continued to push the limits, and ended up making a small fortune in the process. By 1790, he lost most of it for his troubles. In that year, he published the Memoirs of John Almon, Bookseller, of Piccadilly. Though an important figure of his day, with many notable books on his resume, his memoirs are obscure, perhaps printed in only a small number to keep him from further trouble with the law. Item 52. $650.

Herman Hooker was also a bookseller, though one who objected to too much, not too little publishing. Item 59 is his 1849 pamphlet, An Appeal to the Christian Public. On the Evil and Impolicy of the Church Engaging in Merchandise; and Setting Forth the Wrong Done to Booksellers, and the Extravagance, Inutility, and Evil-Working, of Charity Publication Societies. Hooker objected to religious societies engaging in merchandising, specifically, publishing tracts subsidized by contributions. He believed this commercial activity had a secularizing influence, while drawing funds away from other needed religious endeavors. Most notable of these organizations was the American Tract Society, which began publishing many such papers beginning in 1825. Mr. Hooker was well-positioned to understand the religious concerns he expressed as he was an Episcopal minister. However, he had retired from the practicing ministry due to ill health, and at this time was a bookseller and writer, and perhaps he was even more concerned by the effect of free, subsidized competitive offerings from these societies on his own business. $325.

This takes us to a more recent bookseller and publisher whose publishing/selling activities also got him into trouble. However, he is today better known for his own writing, being one of America's foremost poets. Lawrence Ferlinghetti, now 96, was a co-founder of City Lights, a bookseller and publisher in San Francisco, in 1953. In 1956, he was tried on obscenity charges for publishing Allen Ginsberg's Howl, a landmark free speech trial in which he was acquitted. He has since had a long career as a poet. Item 184 is At La Puerta Escondida, a Ferlinghetti poem published in French and English in loose sheets in a hand-made box in 2005. It includes five full-page etchings by Bertrand Bracaval. Bracaval is a French artist, and both he and Ferlinghetti have signed this work, which was limited to 35 copies bound thus. $1,750.