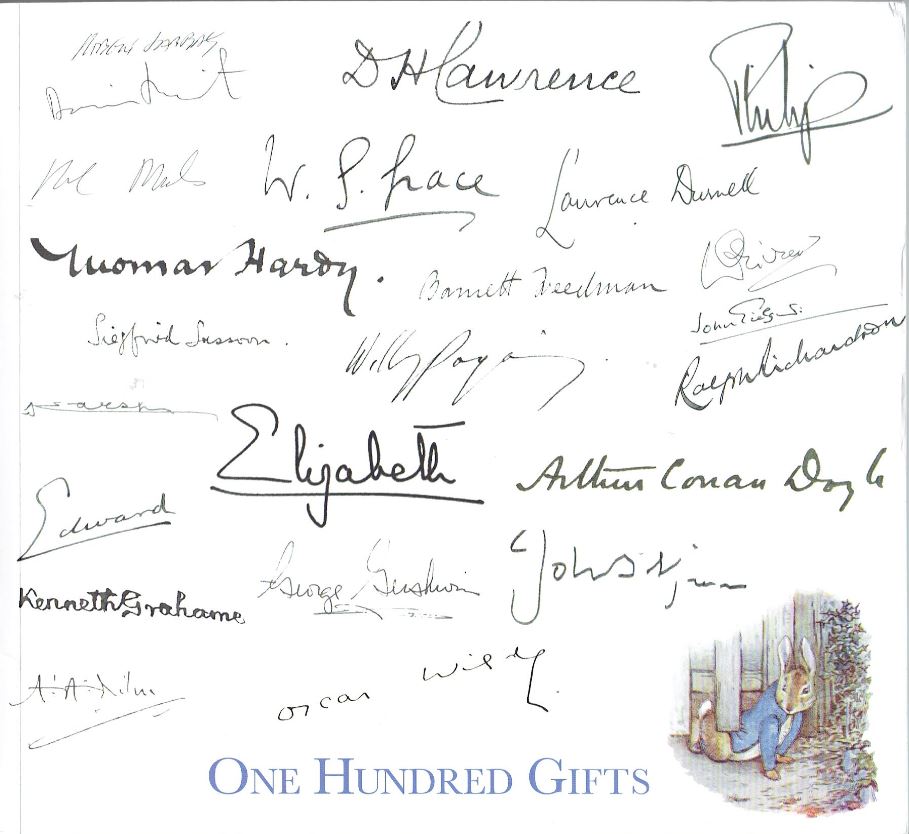 Shapero Rare Books has issued a catalogue of One Hundred Gifts. This catalogue actually came out a little before Christmas, so the gifts were probably meant for that season. Fortunately, Valentine's Day is almost here, so you can pick out something special for your valentine. What's more, there are 103 items offered in this catalogue of 100 gifts, so you can choose three for yourself. The selections herein are listed under five subjects: Fiction, Poetry & Prose; Children's & Illustrated; Visual & Performing Arts; History; and Sports & Pastimes. Here are a few examples of these items.

Do you want to impress someone with a very large gift? How about giving the complete works of Winston Churchill? Considering everything else he did during his lifetime, years in politics, not the least of which included saving the world, it's a wonder he had time to write anything. Nevertheless, he wrote massive amounts of copy, including his thorough account of the war in which he led his country to victory. Item 60 is The Collected Works, published 1973-1976. It contains all 50 of his published works in 38 volumes, including the four volumes of essays published later in 1976. It is the only complete collected works of Churchill's writings. Item 90. Priced at £6,800 (British pounds, or approximately $10,120 in U.S. dollars).

If 38 volumes of Churchill is a bit weighty for light reading, here is beloved book that will be much less taxing on your mind: The Tale of Peter Rabbit. Beatrix Potter's text is much less challenging, and besides, there are lots of illustrations to take you through her rabbit's tale. The first two editions were printed privately by Ms. Potter in short runs. It was then that she finally convinced a publisher, Frederick Warne & Co., to print her children's book. As we all know, it quickly became a children's classic, the naughty rabbit, cold-hearted farmer Mr. McGregor, and Peter's ever-patient mother teaching us valuable lessons in life, such as don't steal carrots and lettuce. Item 61 is a copy of Warne's first trade edition, and the first with color illustrations, published in 1902. £3,500 (US $5,207).

Here's a book with no more historical accuracy than the tale of Peter Rabbit, but it had a lot of people fooled. Item 34 is Miscellaneous Papers and Legal Instruments Under the Hand and Seal of William Shakespeare, Including the tragedy of King Lear, and a small fragment of Hamlet, from the original MSS in the possession of Samuel Ireland, of Norfolk Street. The book was edited by Samuel Ireland, a Shakespeare scholar and collector, but the material was fake. Not that he was a fraud; Samuel Ireland believed it was all authentic. The fraudster was his son, William Henry Ireland. The son told his father that the material came from an acquaintance who insisted on anonymity, but in reality, William Henry forged the documents. In the case of poor Samuel, he wanted to believe the material was authentic so much that he did, along with being too trusting of his son. Others were suspicious, but William Henry Ireland had many convinced in 1796 when this book was published. In time William Henry became even bolder, going so far as to create a previously "unknown" Shakespeare play, which didn't quite live up to the reputation of the Bard's other plays. Finally, a decade later, the evidence of fraud too clear, William Henry confessed to spare his father's reputation from being destroyed by his misbehavior. £475 (US $709).

Ian Fleming is, of course, known for his James Bond novels. In the past decade, they have become some of the most collectible and valuable works of fiction published in the last half of the 20th century. Just as successful novels can lead to successful films, success on the big screen can make their books highly desirable. However, Fleming wrote another story that also translated to a huge success in the theaters, though it had about as much in common with James Bond as did Peter Rabbit. Item 52 is Fleming's Chitty Chitty Bang Bang. It is a children's story about a magical car that reached the big screen in 1968. Item 52 consists of first edition, first issues of the three Chitty Chitty Bang Bang stories, published 1964-1965. £2,700 (US $4,031).

Bill Brandt was one of England's best photographers of the 20th century, though he was actually a German. Brandt's father had been born in England though his family had moved to Germany when he was young. Bill Brandt, the son, was not terribly fond of his German heritage, perhaps because his father's background led to the family being interned for a while during the First World War. Brandt returned to his father's roots as things were sliding downhill in Germany, moving to London in 1933. Along with providing photographs for magazines, he published a book of photographs in 1936 he had taken while roaming around the English countryside. In 1938, he followed up with this book, A Night in London. Story of a London Night in Sixty-Four Photographs. Brandt had a knack for capturing life as it was, while the nighttime theme added an air of mystery to his photographs. Item 74. £4,200 (US $6,276).