Fine Books from the Veatchs Arts of the Book 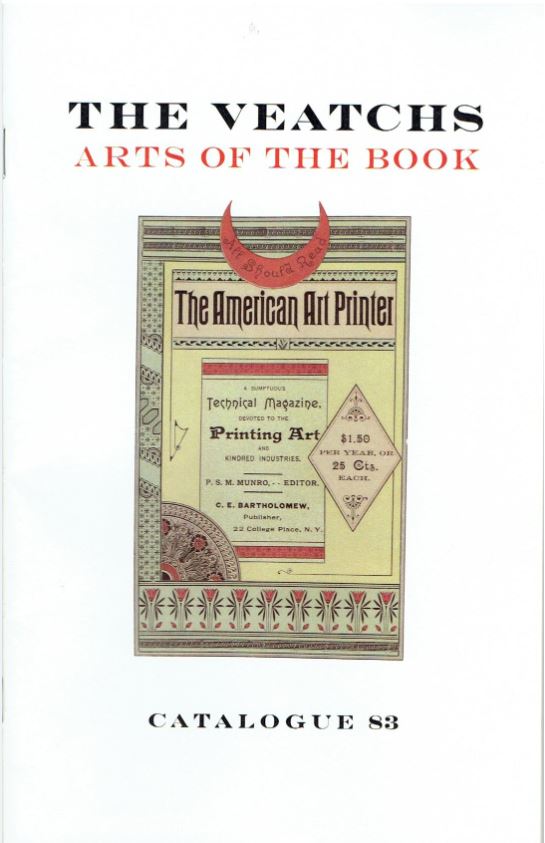 Arts of the book.

The Veatchs Arts of the Book has issued a new catalogue in the book arts, Catalogue 83. In this latest edition, we find numerous printings from private and fine presses, exquisite bindings, books with beautiful illustrations, along with more technical items, such as type specimen books and trade journals. There is much here for those whose interest in books is more than textual. Here are just a few samples.

This book does not represent bad spelling, just very old spelling: The Treatyse of Fysshynge with an Angle. This is a century-old edition of a five century-old book. This book was originally published in 1496 by the legendary Wynkyn de Worde, who was as fond of "y's" as the author of this book. Perhaps the letter "i" had not yet been invented in 1496. The author is the even more legendary Dame Juliana Berners. She is more legendary than de Worde because no one knows for certain whether she actually existed, let alone wrote this book. Nonetheless, she is credited with its writing, and an illustration shows a woman catching a fish with her line, something we might not have expected to see depicted in this male-dominated era. Likely, she is supposed to be Dame Juliana herself. This edition comes from another notable printer, the Ashendene Press of Charles Henry St. John Hornby. This fine press operated from 1895-1935, churning out roughly one book a year. This was no mass production. This book was published in 1903. Item 3. Priced at $1,800.

Next we have another ancient book but in a more recent printing. Item 1 is The Poeticon Astronomicon of Gaius Hyginus. Hyginus was a first century BC Roman writer on many subjects. This particular one dealt with the constellations and the myths behind them. Naturally enough, his work was not printed in his lifetime nor anything close to it. However, a few decades after the invention of the printing press, Erhart Ratdolt published an edition in Latin in Augsburg. That was in 1482, but it took the Allen Press of Greenbrae, California, to finally publish an edition in English, over five centuries later, in 1985. This edition contains 48 woodcuts as appeared in the original edition. They display stars in the sky with the imagined images of the constellations overlaid. Text describes the myths that went with them. The Allen Press of Lewis and Dorothy Allen began printing limited edition private press books in 1939, featuring handmade paper and other fine materials. This book was published near the end of their long run, in 1985. $1,000.

Here is yet another book that dates back to the 15th century, except this one actually is that 15th century edition, or at least a piece of it. Item 33 is a leaf from Postilla Super Totam Bibliam, printed in Rome in 1471. The author was Nicholas de Lyra, and like Hyginus, his book was written long before the invention of printing, though not quite so long. De Lyra lived from the 13th to the middle of the 14th century. It is a commentary on the Bible, in fact, the first printed commentary on the Bible. De Lyra used the various resources available to him, including works of other scholars plus church tradition and his own literal interpretation of the Bible to explain its passages. $250.

Next up is an alphabet book most fowl. Item 11 is A Fowl Alphabet, published by the Cheloniidae Press of Alan James Robinson. Robinson not only printed the book, but produced the wood engravings used to illustrate it. There are an unsurprising 26 engravings used to illustrated this alphabet book. There were 26 lettered copies published, this one being letter "F." The total edition was 231. Calligraphic lettering by Suzanne Moore in various colors accents the book. It comes with an original signed watercolor from Robinson along with a suite of wood engravings. $3,500.

Back in the heyday of printing, before there were social networks illustrated with emoji, there were stock images. These were stock illustrations that could be picked up and used by any newspaper or magazine, some free, others for a charge. Here is a book of them, circa 1900 – Barnharts Stock Cut Catalogue. These were more extensive than typical emoji today, including, the Veatchs tells us, "fraternal orders and religions, trades and professions of all kinds, musical instruments, horses and carriages, firemen, homes, ships, flora and fauna, food and tobacco, holiday and patriotic art, fashions, politically incorrect humor, lots of chickens, livestock and horses, decorative backgrounds, ornaments, and borders." Item 56. $200.