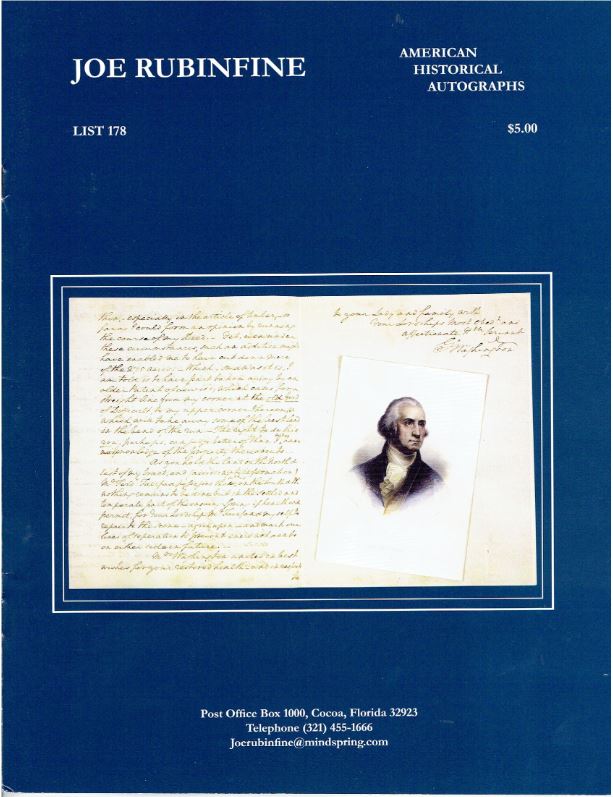 Joe Rubinfine has published List 178 of American Historical Autographs. A few are simply autographs, a signature and little more, but most are found on letters and other documents. Often, they have a story to tell. The names are primarily important figures, such as U.S. presidents, military figures from either the Revolutionary or Civil War, or signers of the Declaration of Independence. It is filled with the signatures of people you know, not personally of course, and those you don't recognize will become familiar once you understand their historic role. Here are some examples of the items to be found, from the father of his country, to the leader who preserved his country, to others who played many roles in American history.

We start with a letter from Abraham Lincoln, only a few months into his presidency, dated August 22, 1861. In it, Lincoln, always helpful to friends, seeks a position for an old colleague from his days as a Whig Congressman in Illinois. The letter, sent to Secretary of War Simon Cameron, requests, "Victor B. Bell, now of Colorado, is one of my most valued friends; and one of the best, if not the very best Clerk I ever knew. I would like for him to be an Asst. Qr. Mr. [Quarter Master] or Com. of Sub. [Commissioner of Substance] of Volunteers. Can you not fix it for me?" Lincoln used the term "fix" for making something happen. Bell briefly served as a Whig representative in the Illinois legislature and this was not the first time Lincoln sought a government position for him. He made a recommendation for a clerk position for Bell when he was a congressman from Illinois in 1849. One would think a request like this from the President to a subordinate would certainly get Bell a job, but for whatever reason, such an appointment was not made by Cameron. Instead, Bell was sent home with an effusive letter of praise from the President and a request addressed to Illinois Governor Richard Yates that Bell be appointed to head some volunteer unit in the war with a position of captain. Ultimately, he was appointed to the 11th Illinois Infantry, but only at the rank of first lieutenant. Item 24. Priced at $24,000.

Lincoln won his first presidential election after the Democratic party split between northern and southern factions, the South finding nominee Stephen A. Douglas insufficiently slavish to their slavish demands. In prior elections, Democrats had won using the formula of nominating a "southern man with northern principles." Such a man was Franklin Pierce, who was elected President in 1852. However, the party denied Pierce renomination in 1856, his extreme "southern principles" making him unpopular in the North. Nonetheless, with the party on the brink of disintegration in 1860, some believed Pierce might be the most likely candidate to hold the party together, as he had in 1852. Pierce wasn't interested. Carroll Spence, a long-time Pierce supporter from Maryland, who had been rewarded with the ambassadorship to Turkey during Pierce's presidency, had inquired whether the former President might consider running again. The Democrats were about to convene in Baltimore for their disastrous convention at the time. Pierce responded to his old friend, "...with regard to the Convention, I hope for the best, but am not without deep solicitude. I thank you for the manner in which your friendship leads you to speak of me, but I would not under any circumstances permit my name to go before the Convention..." Item 28. $2,500.

Here is one of those autographs with nothing more. Actually, it is six autographs, clipped from what was likely a letter, since above the names it was written, "your obedient servants." This might not be that interesting except for who these people are. The names are Robert Morris, Josiah Bartlett, Philip Livingston, Richard Henry Lee, Thomas McKean, and Francis Lewis (who has signed it twice). If those names aren't instantly recognizable to all, they will be familiar to collectors of signers. All six also signed the Declaration of Independence (no, they weren't clipped from that document!). It was Lee who put forth the resolution in the Continental Congress on June 7, 1776, calling for freedom from British rule, which led to the Declaration of Independence less than a month later. Item 11. $1,500.

Item 40 is a sheet of paper with the strange, handwritten statement, "The Republican party wrecked by Garfield, saved by Guiteau's inspiration and Arthur's statesmanship." For those unsure of what Charles Guiteau's "inspiration" was, it was the assassination of President James Garfield. Guiteau met up with Garfield as he awaited a train, pulled out a gun and shot him. Guiteau had sought the office of consul to Paris, for which he was manifestly unqualified, but did not receive it. As a Republican, he presumed it was because he was part of the wrong faction of the party, and that once Chester Arthur became President, he would rectify the situation. Guiteau thought the country would praise him as a savior. He was very wrong. Arthur undoubtedly would not have been pleased with the compliment he was paid in this statement. To Charles Guiteau's eternal, quite literally, surprise, he was executed instead of praised. This signed statement from prison has a notation at the bottom from Warden John S. Crocker certifying that it was Guiteau himself who signed this document in his presence. $15,000.

Salmon P. Chase was one of the most important American figures in the movement to abolish slavery. Starting as a Whig in the early 1840's, he became a leader in the Liberty Party in Ohio, later in the Free Soil Party, and was a founder of the Republican Party. He was a lawyer noted for fighting the Fugitive Slave Act, defending escaped slaves. It earned him the moniker "Attorney General for Fugitive Slaves." He worked tirelessly for abolition, achieving numerous high offices – Governor of Ohio, Senator from Ohio, Secretary of the Treasury, and Chief Justice of the Supreme Court. Chase Bank was named in his honor. However, he was also an ambitious man, and the one office he most wanted – the presidency – eluded him. He sought the Republican nomination in 1860 but lost to Lincoln, who named him Secretary of the Treasury. From there he plotted taking the nomination from Lincoln in 1864, at times threatening to resign, finally accepted by Lincoln after he secured the 1864 nomination. Nonetheless, Lincoln appointed him Chief Justice of the Supreme Court. In 1868, he again sought the Republican nomination, though U.S. Grant was the overwhelming favorite, then tried for the Democratic nomination, again unsuccessful. He joined up with a breakaway Republican group in 1872, the Liberal Republicans, who combined with the Democrats in selecting a presidential nominee. To Chase's dismay, it again was not he. Chase died the following year. Item 26 is a letter from December 1867 from Chase to financier Jay Cooke, a wealthy man he had worked with to sell bonds that financed the Civil War. Chase says that he heard that Cooke had said Chase had no chance against Grant. Chase counters that many of his friends insisted the country needs a proven Republican civilian and have brought forward his name. Chase says he supposes Cooke concurs and therefore urges him to cooperate with his candidacy until the nomination itself, not appearances, are determined. Cooke would go on to support Chase for the Republican nomination, but to no avail. $2,000.