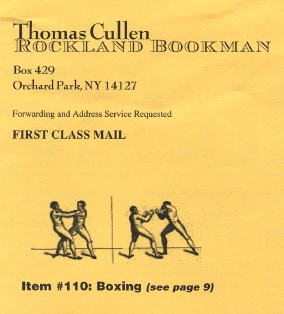 This month, we review our first catalogue from Thomas Cullen, Rockland Bookman. Cullen is an Orchard Park, New York (think Buffalo) bookseller with a specialty in manuscripts. Many of these manuscripts tell of life in the 18th and 19th centuries in rural America. There are diaries, logs, letters, and business records of Americans and Canadians as they carried on their lives in a world that little resembles ours of today. Here are a few samples of the looks back in time Cullen offers.

Item 75 is the inn register from a Lynn, Massachusetts, hotel from 1831-1835. This was evidently a popular hotel at the time, and the register lists the names of many visitors, as well as purchases of supplies: chickens, cigars, lemons, bacon, beef, and more. Among those who registered at the inn in 1833 were President Andrew Jackson, and the man he defeated in the 1832 election, the Great Compromiser, Henry Clay (but not together). Jackson evidently was no compromiser, as his hotel bill ran to $400. That was quite a sum of money in those days, interesting for this frontier man of the common people. I wonder who picked up the tab. Priced at $275.

Charles Deardorff was a rural Ohio physician in the mid-19th century ("Ohio" and "rural" were synonymous in those days). Item 95 is his ledger, running from 1847-1854. The doctor prescribed blue pills, blistering agents, quinine, opium, camphor, and antimony salts among other drugs. The blue pills, Cullen explains, contained a mercury compound used to combat venereal disease. Nothing like mercury poisoning to take you mind off your venereal disease. The journal also contains a list of obstetrics cases with detailed descriptions of what Cullen describes as "nightmarish deliveries." Deardorff's family was involved in the formation of Dover, Ohio, earlier in the century, and the doctor owned some land, held some mortgages, and built a house in the town, data additionally contained in his ledger. $525.

It is fitting that Cullen would offer a letter from Buffalo's favorite son, Millard Fillmore. Fillmore is one of those presidents who ascended to the presidency but never was elected to the office, joining that pantheon of greats with John Tyler, Andrew Johnson, Chester Arthur, and Gerald Ford. He was so popular that his party would not nominate him for his own term, though this Whig would join with the nativist "Know Nothing" party for an unsuccessful presidential bid in 1856. Item 18 is a February 12, 1853 autographed letter from Fillmore to B. Thompson of Buffalo, described as a "secret inspector" for the Treasury Department, informing the latter that his job would conclude on March 1, the day Fillmore's term came to an end. $1,650.