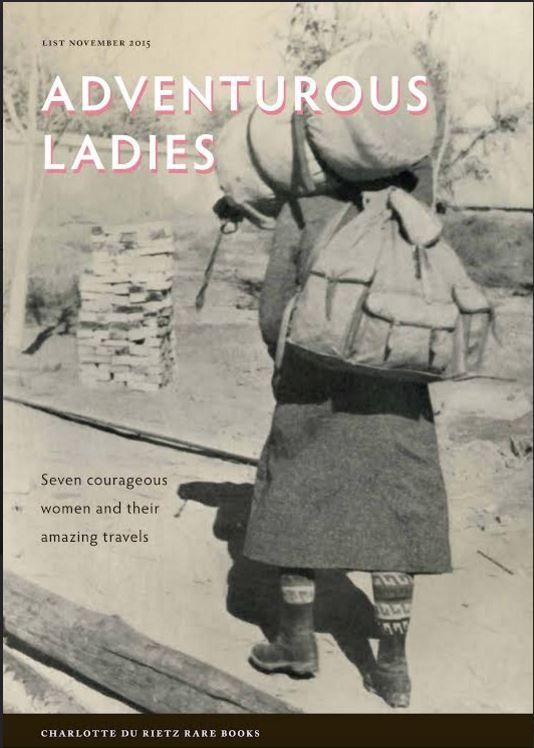 Charlotte Du Rietz Rare Books has issued a catalogue that is unusual in its subject matter. It is a book of long ago travels to far off, exotic lands (from a European perspective). However, these were not your typical travelers. These were all women, often setting off alone in a world that was not terribly welcoming to women who didn't know their place in society. It didn't stop them. Sometimes, these seven women had to disguise themselves as locals to be acceptable. Their safety was often at risk. But, these were courageous women, unafraid to explore the unknown.

The title of this catalogue is Adventurous Ladies. Seven Courageous Women and Their Amazing Travels. Since this is an unusual catalogue, we will not review it the typical way. Instead of describing some of the 24 books by or about these women offered, we will provide a brief description of the women themselves. Details about the books can be found on the Charlotte Du Rietz website, which includes a downloadable catalogue.

Lady Hester Lucy Stanhope (1776-1839) – Lady Hester, after the death of her mother at a young age, ended up with her uncle, Prime Minister William Pitt (the younger). She served as an exceptional hostess, but she was also an eccentric. In 1810, she set off for the east, never to return to Britain. She spent most of her time in Syria and Lebanon, conducted early archaeological explorations in the Holy Land, and organized a Druze revolt against the Egyptians. She settled down in an old monastery in Lebanon, but as she became more eccentric, her help left. She died alone.

Annie Taylor (1838 -1921?) - A missionary in China, Taylor concluded God wanted her to go to Tibet, "the most unfriendly country in the world." She was robbed several times and her companion betrayed her. Just three days short of her goal, she was forced to turn back.

Mary Henrietta Kingsley (1862-1900) – For her first 30 years, Mary Kingsley stayed at home caring for her mother, but after her parents died, she set off for Africa. She took two trips to West Africa, where she worked as a small time trader. In the process, she conducted zoological research and wrote books. In 1900, she volunteered to be a nurse in the Boer War, but died shortly after arriving in South Africa.

Gertrude Margaret Lowthian Bell (1868-1926) – Born to a wealthy family, after her father died, she headed east. She spent her life in areas you wouldn't want to go today – Syria and Iraq, along with the heart of Arabia. She served British intelligence during the First World War and later was a political advisor to Iraqi King Faisal I.

Alexandrine David-Neel (1868-1969) – David-Neel was a Frenchwoman who studied Buddhism and set off for the Far East at the age of 40. She stayed away from home for 14 years, traveling to Japan, Korea and Burma, before settling into a nomadic life in China. She too traveled to Tibet. She later returned to France and spent the last 20 years of her 100-year long life in the south of France.

Ella Maillart (1903-1997) – A native of Switzerland, Maillart set out for Russia in 1929, eventually living among tribes in Turkestan. She then became a correspondent for a French newspaper, sent to China to observe the Japanese occupation of Manchuria. After more travels, she spent the Second World War in India before returning to Switzerland, where she stayed the remainder of her life.

Osa Johnson (1894-1953) – Osa Leighty, later Johnson, grew up in Kansas. She didn't make it to Oz, but Johnson and her husband explored unknown lands in East and Central Africa, British Borneo, and the South Pacific islands. She became a filmmaker with her husband, and after he died in a plane crash, she continued their work alone. She led Twentieth Century Fox's expedition in 1938 to film Stanley and Livingstone.