Books from the Library of Anthony Hobson from Forest Books 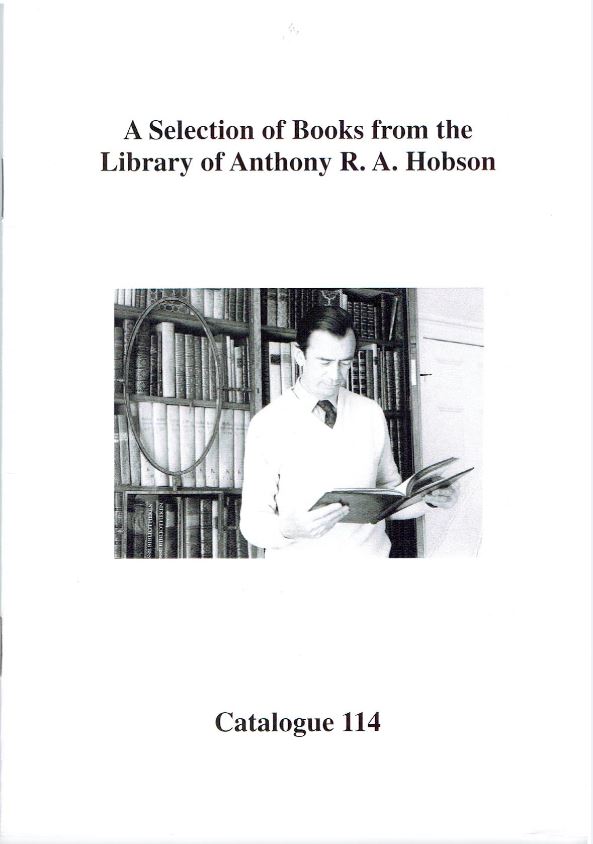 From the library of Anthony Hobson.

Forest Books has published a catalogue entitled A Selection of Books from the Library of Anthony R. A. Hobson. Anthony Hobson was a bibliophile, expert, particularly on Renaissance bindings, author of numerous books and articles about antiquarian books and manuscripts, and a director at Sotheby's auction, in charge of the book department. He succeeded his father, who had been one of the purchasers of Sotheby's in 1908, when the latter died in 1949. Anthony Hobson remained in that role until the 1970's when he left the firm, concerned about its expansion. Along the way, Hobson oversaw many important sales, perhaps the most recognizable being the final parts of the century-long Thomas Phillipps sale. He was a member of numerous book collecting societies and an avid collector. Mr. Hobson died in 2014 at the age of 92. In an article in the Spectator, his son noted that, while he felt sad dispersing his father's collection, his father had told him that when the time came, he should "let other collectors have their turn." Here's your turn. These are a few of those books.

Speaking of the obsessive Mr. Phillipps, item 128 is Portrait of an Obsession. The Life of Sir Thomas Phillipps, the World's Greatest Book Collector. Adapted by Nicolas Barker from the Five Volumes of Phillipps Studies. This adaptation of the 5-volume set by A. N. L Munby was published in 1967. Phillipps had been dead almost a century by that time, but it would still be another ten years before his final sale at Sotheby's would be held (some further remnants of his collection were sold by Christie's in 2006). Phillipps was beyond obsessive, building a collection unrivaled in size, even though he was a man of relatively modest means. He had a good income from a trust, but not nearly enough to cover his desire to own, quite literally, everything. His homes were filled to the ceiling, his bank account constantly in debt. While his book collection was massive, it was his manuscripts that far exceeded anything previously seen. Phillipps was noted for buying out entire libraries, auctions, and other inventories, particularly of manuscripts. The book comes with a letter asking Anthony Hobson to review this book, a 5-page typescript of that review, and some letters from Munby. Munby was noted for some ghost stories he wrote while a prisoner of war in Germany, but then settled down to a life as a librarian and in the book trade, a few years with Bernard Quaritch and several at Sotheby's. Priced at £95 (British pounds, or about $145 U.S. dollars).

Item 5 was in effect one of the earliest bibliographies. It is a catalogue of a large and magnificent collection, Index Bibliothecae qua Franciscus Barberinus... It was published in 1681 after the library's owner, Cardinal Francesco Barberini, died. Cardinal Barberini was a wealthy member of a wealthy family. At the young age of 26 he was named a cardinal. It didn't hurt that the then Pope, Urban VIII, was his uncle. Urban also named another nephew and his brother cardinals. Cardinal Barberini conducted diplomatic missions for the Pope, but more importantly, headed up the Vatican library. Meanwhile, his growing wealth enabled him to build his own spectacular library. The library at a minimum contained over 31,000 printed books when the Cardinal died, and a large collection of manuscripts. This catalogue, which covers only the printed books, comes in two volumes. A third volume for the manuscripts was planned but never published. This catalogue is considered one of the earliest bibliographies because it was arranged in a revolutionary manner for the time – alphabetical order by name. Barberini was noted as a great promoter of the arts (and spending). He deserves special recognition as one of only three of the judges who refused to sign the sentence of Galileo after his second trial, and arranged for him to spend his remaining years in comfortable surroundings, rather than being shipped off to a monastery. £5,000 (US $7,609).

Here is a word to the "wise" that everyone involved with rare books needs to keep in mind – not everything is as it seems. Item 149 is Thomas J. Wise in the Original Cloth. The Life and Record of the Forger of the Nineteenth Century Pamphlets, published in 1946. The author was Wilfred Partington, one of the primary investigators responsible for Wise's downfall. Thomas Wise was once a respected scholar, but he found he could make more money through book forgery. He would not just copy existing books, but create new ones under an author's name. He might take an article that first appeared in a collection and create a separate edition, dated from before the collection. Voila! He had an extraordinarily rare, previously unknown, "true" first edition. It worked for a long time, but not forever. This copy comes with an interesting letter from C. G. de Graz, managing directory of Sotheby's auction rooms, to Mrs. Wise in 1933, when Wise's fraud was first becoming known. In it de Graz writes, "I am not writing to Mr. Wise directly... all of us here sympathize with Mr. Wise in the unhappy controversy which has arisen this Summer..." Perhaps de Graz was unconvinced, or unaware of the extent of Wise's forgeries at the time. Other letters included are Mrs. Wise's reply, a letter from de Graz to Partington thanking him for a copy of his book, and a copy of a letter from Hobson to Partington. £75 (US $114).