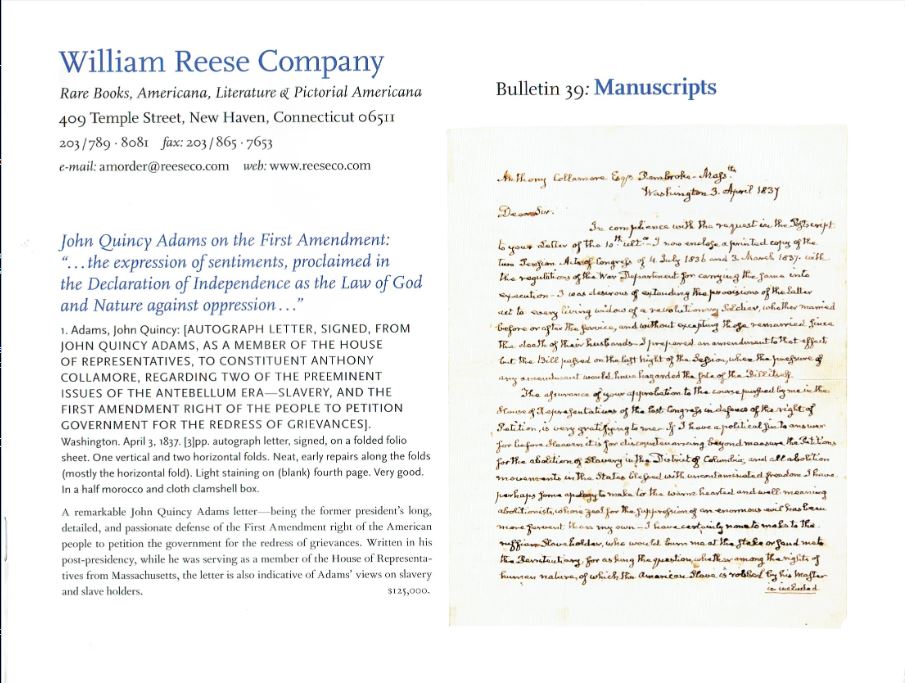 The William Reese Company has issued a new bulletin, Bulletin 39: Manuscripts. This is a collection of 47 mostly American manuscripts. They date primarily from the 18th or 19th century. There are many of significance here, and some of the writers are the most important figures of American history. There are a couple from George Washington, and American figures don't come any more important than that. Here are a few samples of the interesting material to be found in this collection.

This document has a harmless enough title and a couple of notable signatures. It also has a dark backdrop not obvious. Item 14 is An Act for Regulating the Officers and Soldiers in the Pay of this Province... dated May 30, 1764, from Philadelphia. It is signed by Benjamin Franklin as Speaker of the Pennsylvania Assembly and John Penn as Governor. It was also signed by Penn's Secretary, Joseph Shippen, uncle of Peggy Shippen, better known as Mrs. Benedict Arnold. This act was intended to end desertions from the Pennsylvania Militia and do a better job of defending settlers on the frontier. It arose after a march on Philadelphia by the Paxton Boys, demanding better protection from the Indians. It was actually the Indians who needed protection from the Paxton Boys. Organized in Paxtang, Pennsylvania, the "Boys" were a vigilante group who slaughtered 20 peaceful Conestoga Indians with longstanding good relations with their white neighbors. Their march on Philadelphia panicked the citizens, with Franklin calming the mob by agreeing to bring their grievances to the legislature. Priced at $35,000.

Item 3 is a manuscript retained copy of a letter sent to British officers at a critical moment near the start of the Revolution. After the Battle of Lexington and Concord in the spring of 1775, American forces surrounded Boston, controlled by the British. There began a year-long standoff. The British had a technical victory at the Battle of Bunker Hill, but their casualties were so great they never made another serious attempt to take the surrounding countryside again. The patriots looked down at Boston from Dorchester Heights and the two sides would occasionally fire at each other. By the following spring, George Washington, now in charge of the Continental Army, was able to bring in some heavy canons from Fort Ticonderoga. That enabled him to bombard British forces below or in the harbor, while they could not effectively respond as their canons could not reach points uphill. The British realized their situation was becoming untenable, but never felt confident they had the power to dislodged the patriots from the hills. The only other choice was to evacuate, and the citizens of Boston knew it. On March 8, 1776, they sent this letter to British Major General James Robertson, offering to allow the British to leave the city peaceably if they would just leave. They also asked Washington to allow for the same, and while he never formally agreed, the Americans let them go without disrupting their evacuation. $6,000.

America's co-most notable explorer's signature is one of the hardest to find. Meriwether Lewis, who along with Joseph Clark led the greatest internal exploration of America, suffered from a difficult life after he returned. When the expedition returned in 1806, President Jefferson appointed Lewis Governor of the Louisiana Territory. It was a mixed tenure, some claimed he had drinking problems, and accusations of fraud were made by the Secretary of the Louisiana Territory, a political rival. In 1809, Lewis headed to Washington to present his side of the case, but along the way, he was either murdered or committed suicide. Consequently, there aren't all that many documents bearing his signature. Item 24 is a pay receipt signed by Lewis. It is from 1807, and it covers part of his compensation for the famous Lewis and Clark Expedition. $55,000.

Here is a document from a man we know had a drinking problem, although it didn't seem to hurt his performance in the field. Item 16 is a commutation for a crime issued in 1875 by Ulysses S. Grant as President. Ironically, the crime being commuted was "illicitly distilling," for which John Murgen of Minnesota had been sentenced to six months in prison and a $1,000 fine. The document is also signed by Secretary of State Hamilton Fish. $6,000.

Item 1 is a most significant letter pertaining to the early days of the serious attempts to abolish slavery. Practical concerns over sectional controversy made the topic hard for John Quincy Adams to discuss while he was President in the 1820's, and it may not have been an overriding concern to him at the time. By the 1830's, the abolition movement was rapidly gaining steam, and Adams, now serving in the House of Representatives as a Representative from Massachusetts, became a major voice for abolition in Congress. In this letter from 1837, Adams expresses his views about slavery. He also staunchly defends the right of the people to petition the government concerning their grievances. This is a right guaranteed by the Constitution, but in 1836, Congress adopted the "Gag Rule." This rule stated that Congress would no longer accept petitions pertaining to slavery and its abolition. Quincy Adams was the leader of the long fight to repeal the Gag Rule, finally succeeding in 1844. His defense of the right to petition was close to his heart, considering how its denial was favoring the slave interests. $125,000.