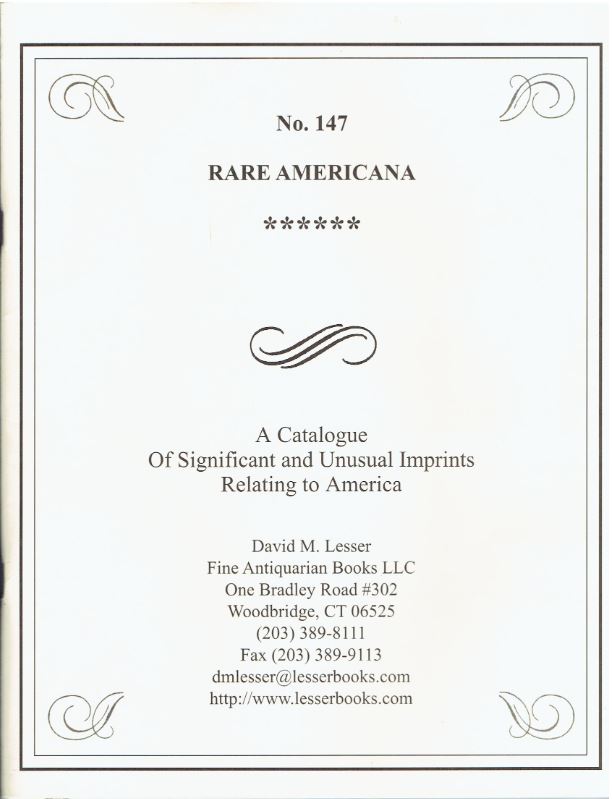 David M. Lesser Fine Antiquarian Books has published their Catalogue 147 of Rare Americana - Significant and Unusual Imprints Relating to America. They specialize in pamphlets, broadsides, and other printed and manuscript documents relating primarily to 18th and 19th century America. These feature the current events of the day. A Lesser catalogue is not just a source of interesting material, but a lesson in American history. Here are a few selections from this latest catalogue.

Unhappy spouses generally don't air their dirty laundry quite so publicly these days, though we would surely generate a lot of literature if they did. Item 14 is Thomas M. Cash's contribution to the genre: A Plain Statement of Facts for the Perusal of Those Interested. New York, February 14, 1872. Inquiring minds want to know. Cash explains, "I have not published this pamphlet for general circulation, but only for the perusal of those who know us, in order that they may understand the reason why my wife and myself have separated." Basically, in four words, the explanation is she done him wrong. Mrs. Cash, according to her husband, had a "fondness for a fast life." To put it another way, she had a "preference for the society of any man other than her husband." She had carried on an "illicit amour for years." As a result, "the scales fell from my eyes and I learned, to my bitter sorrow, how deeply she had fallen into the depths of infamy." Is Mr. Cash's account of their marriage fair and balanced? I don't know. It does not appear Mrs. Cash published a rebuttal. The couple got divorced in 1872, and Mrs. Cash remarried the following year. We also find that she put some of her property in a trust for the express purpose of keeping Mr. Cash's hands off of it. One can guess that her feelings toward her husband were quite similar to his for her. Priced at $250.

It may be a bit late to attend, but it's nice to have an invitation. Item 59 is an invitation for the Inauguration Reception for President Grant and Vice-President Colfax, which occurred on March 4, 1869. The printed invitation has the name of its recipient inserted in hand. It was addressed to Miss Mary L. Boothe. That would be Mary Louise Booth (without the final "e"). Mary Booth made a living translating French books to English during the 1850's. She continued to do that in the next decade, but with a focus on writings by French authors who were pro-Union. She won the praise of President Lincoln for her efforts. This undoubtedly explains this invitation, along with the fact that in 1867, she was selected as first editor of a new and quickly popular magazine, Harper's Bazaar. The Bazaar was published by the publisher of Harper's Weekly, a news magazine, to appeal to a women and family audience. Fashion and home-oriented material was featured. Miss Booth was also a strong proponent of woman's suffrage, but kept political issues out of her publication, wishing it not to be controversial. She continued as editor until her death in 1889. $500.

This next item is a far more momentous piece of American history than anyone's marital squabbles. It is one of the earliest printings of the first draft of the Bill of Rights. The Bill of Rights, the first ten amendments to the constitution, was not a part of the original document. There was a debate whether specifying certain inalienable rights would re-enforce the supremacy of these rights, or lead to the implication that other intended rights, not specifically listed, would not apply. Eventually, those who favored clearly listing certain rights won the day, and James Madison began writing up such a document. Item 87 is a June 13, 1789, printing of Madison's draft. It was published in the Gazette of the United States, and was preceded only by a virtually unobtainable copy printed a day earlier in the New York Advertiser. Madison's proposal contained 12 amendments, encompassing all of the ten eventually adopted by the states. The other two include one prohibiting pay increases for legislators until after the next election, which was adopted a couple of centuries later, and one pertaining to the number of members of the House of Representatives never passed. $30,000.

Item 98 is a document from Pinkerton's National Detective Service, under the printed name of Allan Pinkerton, headed Abduction of Charlie Brewster Ross. An oval portrait of the youngster is pasted above the title. It provides information about Charlie, questions to ask if he is located to confirm his identity, and offered a reward. On July 1, 1874, Charlie and his six-year-old brother Walter were kidnapped from in front of their home in Germantown, Pennsylvania. It was a fine house, and the kidnappers must have assumed they were rich. In fact, the children's father was deeply in debt. Walter was released a few miles up the road, but the parents' received a series of ransom notes from the kidnappers for Charlie. They raised ransom with the assistance of Sarah Ross' rich relatives, but the drop-offs included agents hiding nearby. A successful connection was not made. By four months later, detectives had focused on William Mosher and Joseph Douglas, known criminals. However, before any arrests were made, the two were shot during a robbery. Mosher died instantly, while Douglas lived just long enough to admit they had kidnapped Charlie, but that only Mosher knew where he was held. In 1876, Charlie's father, Christian Ross, published a book about the kidnapping to raise funds to continue the search, but the boy was never found. $500.

Item 20 is an unrecorded broadside from Philadelphia dated 1863. It begins, We are in the midst of one of the most desperate and cruel despotisms that ever disgraced the civilized world. It is a call for insurrection in the North against Lincoln and the Civil War. Many northerners supported the war to preserve the Union, but were not so keen on the Emancipation Proclamation. Whoever published this unsigned document (unsigned as they would have gone to jail for treason) evidently felt this way. It called for something of a pyramid scheme to oppose the war. Each opponent of the war was to enlist ten friends, who would then do the same, and so on until a force was created, awaiting word from each unit's leader to begin the insurrection. No such rebellion ever occurred, nor is there any indication that this group ever developed a significant following. $9,500.