50 Plus 1 from The Pages of Yesteryear 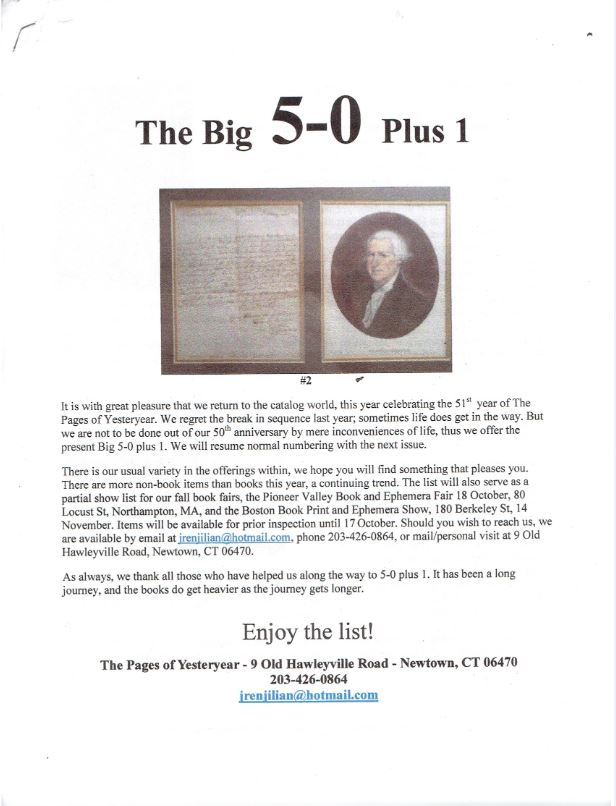 The Pages of Yesteryear has released a catalogue titled The Big 5-0 Plus 1. Owner John Renjilian celebrated his 50th anniversary in the book trade last year but was unable to publish a catalogue. This makes up for it, combining a 50th anniversary plus the reality that this is really #51. Like its title, the catalogue contains 50 items... plus 1. As usual, he notes this latest catalogue offers a varied selection of material, hard to pin down, but fun to read. There is something here for everyone, including those with unusual taste. These are a few of these 50 plus 1.

We begin with a letter from Marinus Willett, evidently intended for some government authority, written in 1791. Willett served as a colonel with the New York State militia during the Revolution. The British were still harassing Americans in upstate New York in 1781, even as the Revolution was coming to its conclusion in Yorktown. Governor Clinton appointed Willett to lead the militia against the British and their Mohawk allies, with Willett and his men achieving a victory at the Battle of Johnstown. To make certain the British couldn't regroup, Willett decided to chase them back toward Canada. However, he needed some help, so he turned to some Oneida Indians with him and made a deal. As he writes in this document, "I promised in case of exerting themselves to overtake the enemy who were put to flight that they each should have a Blanket – That in consequence of this promise they began a vigorous pursuit and in a short time overtook and killed a number of enemy." So here it was – ten years later and the Oneida who had risked their lives still hadn't been given their blankets! Apparently, they never were. In 2004, using a different copy of this document (at least four are known – perhaps used to appeal to different government departments), Andre Deeks sued in federal court for $3 million, claiming that to be the current value, plus interest, of the blankets. His case was dismissed based on the statute of limitations. The bookseller notes that Willett was granted 150 pounds by the New York legislature in 1782 for expenses relating to the campaign, but whether that was meant to pay the Indians or for other purposes is not clear. Item 3. Priced at $2,500.

Item 12 is Grace Vernon Bussell, the Heroine of Western Australia: And Other Poems. The poet was Charles Walker Ray, noted more for writing hymns, to whatever extent he is still known. The lead poem celebrates Grace Bussell, a then 16-year-old girl who rode bravely into the sea to save the lives of those fleeing a sinking ship. It all started when Sam Isaacs, an Aborigine who worked for the family, spotted the troubled ship. He rushed to the Bussell home for help, but could find only Grace. The young girl mounted her horse, raced to the scene, and then somehow managed to convince her horse down a steep cliff to the shore. Next, she rode well out into the water, and was able to carry a bunch of women and children to safety. Isaacs was able to save the one remaining male from the ship. Bussell received a silver medal from the Royal Humane Society for her heroism, Isaacs a bronze (most unusual to be given an aborigine in the day). Ray's account of this 1876 event was published in 1878. $350.

Item 37 is an 1863 affidavit of Adeline J. Jaques, testifying as to the mental state of Rev. Henry F. Hicks. Hicks began serving at the Unitarian Church in East Needham, Massachusetts, in 1852 but left in 1862, for unstated reasons we can now imagine. In an understatement, Mrs. Jaques says Rev. Hicks "appeared very irregular." In February of 1863, Hicks told Jaques he was going to California, but leaving his wife behind as that would be less expensive. He curiously added, "we may meet again and we may not." In July, he told Jaques that he and his wife had separated, noting that he had "a brain fever and her presence irritates me so that I treated her with violence... I might at such times take her life." He claimed to have suffered from "violent sickness" since he was 10. At a later meeting, Jaques noticed Mrs. Hicks was bruised about the face, and she said he had assaulted her several times and once almost choked her to death. On another occasion, he rushed into the Charles River threatening suicide, and then threatened to drown his wife when she attempted to rescue him. Other unpleasantries included attempting to hang himself, stab himself with a pen knife, and threatening his wife with a razor. It is not clear whether this affidavit was part of an attempt to commit Hicks or protect his wife. Whatever happened to Mrs. Hicks is not known, but Pages of Yesteryear notes that Mr. Hicks lived for another 50 years. $175.

Item 10 is one of those unpleasant period pieces, published as a promotional for children by Stewart's Department Store of Baltimore in 1910. Its title is Pickaninnies Little Redskins. Blacks are portrayed in 1910 stereotypical illustrations and text. The bookseller says the Indian children are not treated quite so offensively. Stewart's was a leading department store in Baltimore for most of the twentieth century. It was sold to Caldor's in 1983, which in turn went out of business in the late 1990's. Perhaps this booklet can suggest an alternate team name and mascot for the beleaguered officers of the Washington Redskins football team, in their honor, of course. $150.

Item 16 is a single sheet ballad of Murder in the Railway Train, from 1864. It was the first killing reported on a British railway. Thomas Briggs, a 69-year-old banker was beaten and robbed in his compartment and thrown from the train. His gold watch and chain were missing. A cab driver identified German immigrant Franz Muller, and a jeweler picked Muller from a photograph as the man who tried to sell him the chain. Muller was gone, having taken a ship to America. It was a slow boat, enabling Scotland yard to get its agents to America first and arrange for Muller's extradition before he arrived. This ballad, evidently published while Muller was being brought back to London, is sympathetic to him. It points out that Muller had already planned to emigrate to America and made no attempt to hide his movements, there was no proof a hat found in Briggs' compartment belonged to Muller as claimed, and neither of the people who identified him came forward until after a reward was offered. Despite the circumstantial nature of the evidence, Muller was convicted and hung before a crowd of 50,000. $350.