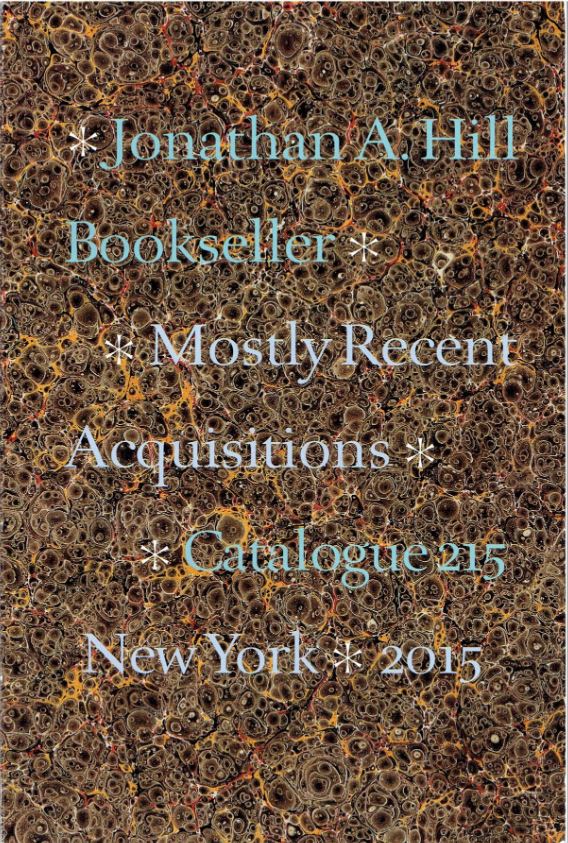 Jonathan A. Hill Bookseller has released a new catalogue of Mostly Recent Acquisitions. Hill covers material from a variety of fields, but not everything. This is not a miscellania. You won't find much fiction or many recent books in this selection. These are serious, often scholarly works, with but a few exceptions, from the 19th century and earlier. Many of these are scientific books, while others cover topics such as medicine, architecture, mathematics, mining, and natural history. There are also numerous books about books, including a substantial collection of auction catalogues from the sales of large libraries in the 18th and early 19th century. Titles are spread through a variety of languages, notably English, French, German, and Latin. These are a few samples of what will be found within this latest collection.

Benjamin Franklin was America's greatest scientist of the 18th century, along with all of the many other things he did. If ever there was a man for which the word "polymath" was invented, it was Franklin. Item 50 is a copy of his Oeuvres... (works), the first French edition of Franklin's collected works on electricity. It was published in 1773. While based on the 1769 fourth edition of Franklin's Experiments and Observations on Electricity, it contains material not in the English language editions. As such, it was the most complete early version of Franklin's scientific writings. It includes correspondence between Franklin and Jacques Barbeu-Dubourg. Dubourg was a French physician and botanist who also served as Franklin's translator. Their correspondence includes discussions of numerous other topics, including ventilation, swimming, inoculation, acoustics, meteors, the cause of common colds, magnetism and its relation to electricity, and another particularly associated with Franklin – stoves. Priced at $7,500.

Here is the first account of an important process for the preservation of food that changed the way we eat, and undoubtedly saved countless lives along the way. It is a French book, entitled L'Art de conserver, pendant plusiers Années, toutes les Substances animales et vegetables (the art of preserving, for many years, all animal and vegetable products). The author of this 1810 text was Nicolas Appert, known as the "father of canning." Technically, he didn't "can" his food. He used glass bottles, but the principle was the same. Appert discovered that he could preserve all sorts of food by putting it in wide-mouthed bottles, sealing them tightly with cork and sealing wax, and then placing the bottles in boiling water long enough for the food to thoroughly heat through. His discovery was of enormous benefit, particularly for explorers sent to far off places for years (they tended to use cans, which when sealed with lead, had dangers not possessed by Appert's bottles). It would be another 50 years before Louis Pasteur would come up with his pasteurization process for milk, and an explanation why it worked. Appert didn't know about bacteria. He just knew that his process could preserve perishable food for an indefinite amount of time. Item 5. $2,750.

Item 74 is an account of the building of a great, though star-crossed bridge: The Quebec Bridge over the St. Lawrence River near the City of Quebec on the Line of the Canadian National Railways. Report of the Government Board of Engineers. Published in 1918, it includes a text volume and a plate volume with 111 plates. The Quebec Bridge is still the longest cantilever bridge in the world. After decades of proposals and plans, construction finally began in 1903. Everything was proceeding along fine until the bridge was nearing completion. At that time, some of the steel began to show signs of bending, and it was realized the weight was greater than anticipated. Unfortunately, before the extent of the problem was realized, the bridge suddenly collapsed, taking just 15 second to fall into the St. Lawrence below. Seventy-five workers lost their lives. It took a few years, but a new plan was created and construction on a second Quebec Bridge commenced. Then, in 1916, as the central span was being lifted into place, it too fell into the river, taking 13 more lives along with it. A replacement central structure was built and the bridge finally completed in 1917. Thankfully, it has stood ever since. This extensive report by the Board of Engineers includes information and photographs of the earlier collapsed bridge as well as the successful finale. $1,250.

One good bridge deserves another. Item 28 is Die neue Ludwigsbrucke in Bamberg, published in 1830.This is a second edition of a celebration of the newly constructed bridge over the Regnitz at Bamburg, completed in 1829. It was the first suspension bridge built in Bavaria, and only the second in Germany. This second edition improved on the first, with more detailed plates. The new bridge replaced an earlier wooden one. It was itself replaced in 1889. $2,250.

Sir Thomas Phillipps was perhaps the greatest collector ever, at least in terms of volume. He hoped to have a copy of every book and manuscript in existence, and likely came as close anyone to achieving his goal. He also did some publishing at Middle Hill, his home which housed his collection, often piled to the ceilings. One more thing – Phillipps was something of a bigot. He was anti-Catholic. I am not sure whether this was in spite of, or because of his Catholic son-in-law, James Halliwell. Halliwell was an antiquarian scholar and book collector himself, whom Phillipps graciously invited into his home for research. However, when Halliwell asked to marry his daughter, Phillipps became enraged. Halliwell had come under suspicion of stealing some books. There were even suspicions he had stolen from Phillipps. He sold some stolen books, but claimed to have purchased them from a bookseller. Eventually, the charges were dropped. Halliwell and Henrietta Phillipps eloped against the wishes of her father. Phillipps refused to have anything to do with either one for the rest of his life. In his will, Phillipps required that his collection, left in the care of a younger daughter, could never be viewed by Halliwell, his older daughter, nor any other Catholic. Item 72 is an item that came off of Phillipps' Middle Hill Press in 1869, three years before he died: An Ex-Catholic Priest's Opinion of the Church of Rome. It was not a high opinion. $250.