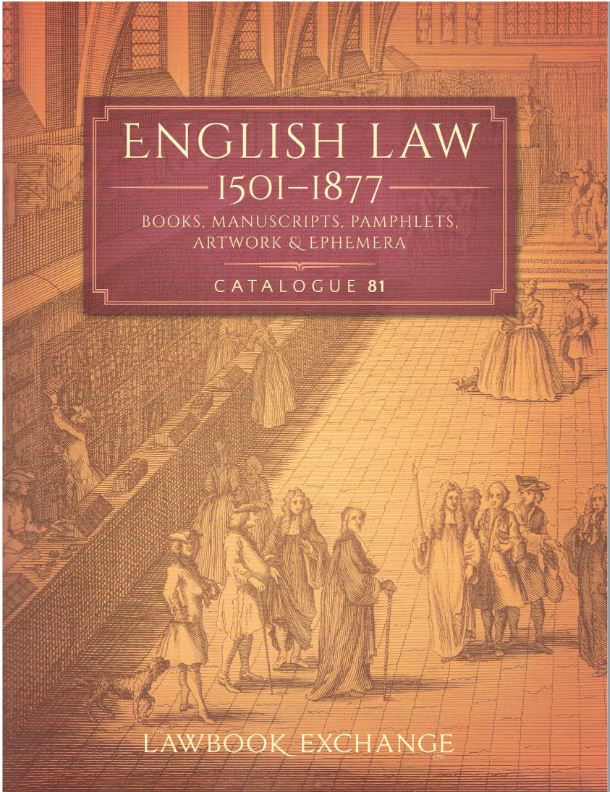 The Lawbook Exchange has released a catalogue of English Law 1501-1877. This includes some of the earliest material relating to the law of England. Several items are printed editions of treatises that preceded the invention of printing, at times by several centuries. It is also worth noting that while officially a catalogue of English law, American law would have been essentially the same in the years before the Revolution. These are a few of these old books and other paper and ephemeral items relating to antiquarian English law.

A logical starting point is what is essentially the first English law book, Tractatus de legibus et consuetudinibus regni Angliae, Tempore Regis Henrici Secundi Compositus... The book was anonymously written, though the author is believed to be Ranulf de Glanville. Glanville was a 12th century justice and close advisor to King Henry II. Henry is credited with organizing the English legal system, though it was Glanville who did most of the footwork. The original manuscript is given a completion date of 1189, and it certainly wouldn't have been later. Henry II died that year, and his son and new King, Richard I, threw him out of office and imprisoned Granville until he paid a ransom. He died the following year participating in the Crusades. Glanville's book is not one of case law, but is instead a procedural guide for the courts. It has long been highly regarded and remained in use for centuries. Item 65 is the first printed edition of this by then 365-year-old text. It was published circa 1554 by Richard Tottel, who served for many years as the exclusive publisher of the English common law. Item 65. Priced at $12,500.

The most notable of all English law books is the one commonly known as Blackstone's Commentaries. Published from 1765-1769 in four volumes, it is a thorough treatise on the then confusing mass of tradition forming the common law, an attempt to make sense of it all and elicit its underlying principles. However, this most famous of English legal tracts was not William Blackstone's first. In 1753, Blackstone took on the task of giving lectures on English law at Oxford. This was something novel at the time, and was so well received he undertook to publish a synopsis of those lectures. Item 11 is that book, An Analysis of the Laws of England. Like his later Commentaries, the Analysis was designed to explain the principles of English law, rather than being a compendium of case law. It would provide the outline for his Commentaries a few years later. The Analysis was first published in 1756, and quickly sold out. Item 11 is the sixth and final edition of the Analysis published by Blackstone, in 1771. It is this edition that is contained in many editions of the Commentaries published after Blackstone's death. $750.

This next book on English law ultimately had a greater influence on America than on England, though that influence came almost a century later. Item 29 is English Liberties: Or, the Free-Born Subject's Inheritance... by Henry Care, published in either 1680 or 1682. During the 1670's, Care was regarded as a hack, a writer of a myriad of cheap books on various subjects. In 1678, he began writing a series of virulently anti-Catholic papers, and became a promoter of the faked "Popish Plot." However, a few years later, he became a voice of tolerance, and a supporter of the Catholic King, James II. He described James as being a tolerant leader. Nonetheless, James was overthrown in the Glorious Revolution of 1688, and we do not know how Care felt about this as he died that same year. Whether the high-minded Care of the Liberties and tolerance, or the intolerant Care of his anti-Catholic period, is more the mark of the man is unclear. It may be that Care's principles were mostly guided by what was in his own personal and financial interests. His Liberties contains important tracts such as the Magna Carta, which Care considered the source of English law, the Habeas Corpus Act, and other such material. Ultimately, the book would have its most dramatic impact on the American colonists, particularly when they tired of English rule. William Penn used it in sourcing his book on liberty, George Mason when writing the Virginia Declaration of Rights, and Jefferson owned two copies and likely considered it when drafting the Declaration of Independence. $2,850.

Item 81 describes the answer to a long unsolved mystery from the early 19th century. It is A Full and Accurate Account of the Inquest Held Upon the Remains of Richard Hemming... published in 1830. Rev. George Parker was murdered in Oddingly, Worcestershire, in 1806. Witnesses' descriptions of his killer matched that of Richard Hemming. There was a problem. Hemming was nowhere to be found. Years and years went by until, in 1830, his remains were discovered in a barn. It was just a skeleton. He had been there a long time – 24 years. At the time Hemming was killed, the barn had been leased by one Thomas Clewes. He confessed, and cited two others as accomplices. It seems the three farmers had hired Hemming to kill Rev. Parker over a dispute involving tithes. Then, one of them, perhaps to assure Hemming's silence, killed him. A trial was held, and most people expected the three to conclude their lives at the end of a rope, but contradictions in testimony, and lack of evidence beyond Clewes' confession, got them acquitted. $850.