Books and Other Items from Douglas Stewart Fine Books 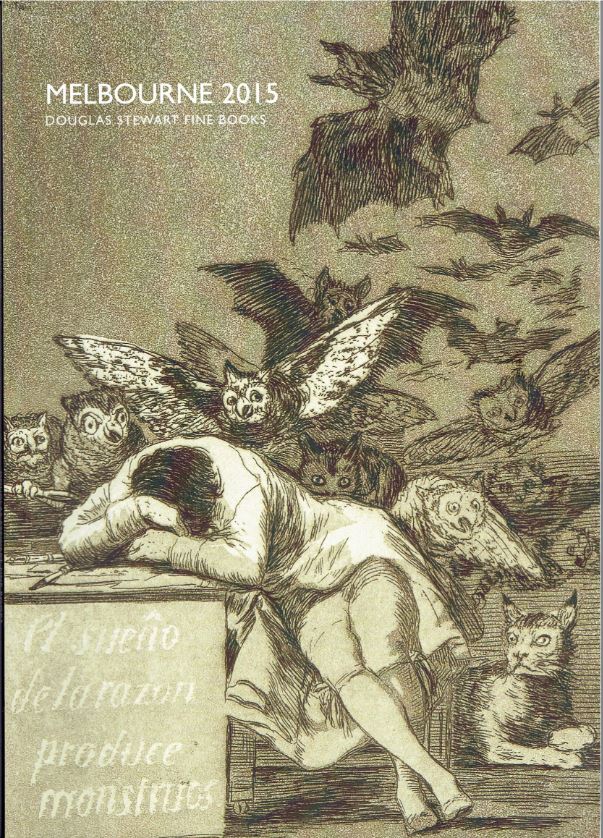 This month we received our first catalogue from Douglas Stewart Fine Books of Melbourne, Australia. The title of this catalogue is Melbourne 2015. Rare books and documents 1459-2012 exhibited for sale at the 43rd Australian Book Fair. That's quite a date range. Talk about something for everyone! 553 years. It begins with a leaf from the fourth book ever printed. It then runs through numerous very old to old books, then photographs from the early days of photography, and the more recent items are works of art. Along the way there are also some interesting ephemeral items. There are more Australian pieces than in the typical, say, European or American catalogue, but there is much to be found from other locations as well. After all, they weren't printing too many books in Australia in 1459. Here are a few samples.

We begin with that very old leaf. It comes from Rationale Divinorum Officorum, by Guillelmus Duranti. Duranti didn't collect his royalties, having died in 1296. He was a 13th century bishop who wrote about ecclesiastical matters, including practical things like building and furnishing church buildings. It was printed in Mainz, the same place as the first book printed with movable type, Gutenberg's 1455 bible. The printers were Johann Fust and Peter Schoeffer. They had assisted Gutenberg with his bible, and followed that up with psalters in 1457 and 1459. This fourth book came off the press in October of 1459. The leaf is folio in size and is printed on vellum. Item 1. Priced at AU $32,000 (Australian dollars, or approximately $22,536 in U.S. dollars).

The world didn't know much about Australia when James Cook set out on the first of his three voyages. It still didn't know much after he returned, but it was far more than people knew before. Joseph Banks was hired on as Cook's naturalist, and he brought along a couple of artists. One of them was Sydney Parkinson. Cook was sent out to observe the Transit of Venus, attempt to locate an imagined great southern continent, and chart the area. There was no great southern continent, but Cook charted substantial portions of Australia. Parkinson was the first European artist to draw images of the natives of Australia and New Zealand. He also drew botanical specimens and many other subjects, some 1,300 drawings in all. Like Duranti, Parkinson never saw his book published. He came down with dysentery and died in Batavia (today Jakarta) in 1771. However, after Cook returned, Parkinson's brother, Stanfield, published A Journal of a Voyage to the South Seas, in His Majesty's Ship, the Endeavor. Faithfully transcribed from the papers of the late Sydney Parkinson. An injunction was issued to prevent the book from being published prior to the official account. It was published the same year as, but later than, the official account in 1773. Item 8. AU $12,000 (US $8,451).

It didn't take long for the British to come up with a practical use for this vast newly discovered land. Their prisons were terribly overpopulated and they didn't know what to do with all the criminals. They could hang 'em, but not even King George and his men felt all that comfortable with executing people for minor crimes. Australia was the solution. Ship them off to someplace so far away they could never return. So began the transportations. They began in 1787 and continued as late as 1847. Along the way, many books were written about them. The topic was fascinating in its own morbid way to the British public. Not all were completely accurate. Item 16 is The Extraordinary Life of James Stewart, the unhappy Transport. There weren't many happy transports, but Stewart was not as unhappy as most since he was a fiction. He supposedly worked in tobacco fields with black slaves for 12 years. Perhaps he accidentally was transported to the Caribbean. Nor are there any records of Stewart or his supposed crimes. Nevertheless, this 1824 book undoubtedly provided hours of entertainment. These books were obviously intended to discourage the crimes that resulted in transportation, and just as obviously were unsuccessful at doing so. AU $3,000 (US $2,112).

Item 25 is a photo album with the cover title Album Chinois (Chinese Album). It contains a page of text and 41 leaves of mounted albumen photographs. It was anonymously produced, but the text (in French) likely places it with missionaries from the Compagnie de Jésus. They were missionaries in China at the time. It is undated, but contains an inscription from French painter Augustin Aubert, who died in 1857. That places this as a quite early collection of photographs of China. It includes portraits of both missionaries and Chinese people, along with historical scenes. AU $15,000 (US $10,563).

What would an Australian catalogue be without kangaroos? We don't have to worry about that. Item 42 is The History of Hoppers. This children's book contains verses by Bessie Parker and illustrations by Nancy Parker. This circa 1912 book contains the adventures of a family of anthropomorphic kangaroos. Item 42. AU $2,850 (US $ 2,007).