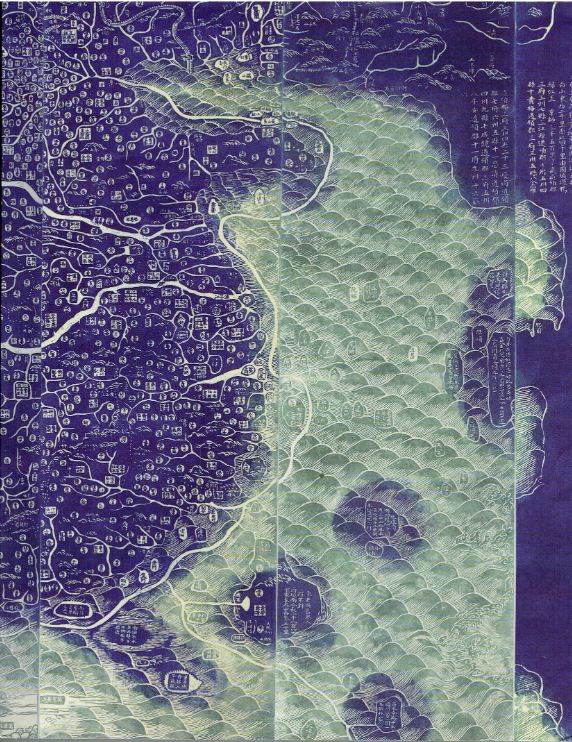 Daniel Crouch Rare Books has issued their Catalogue VII, and it is spectacular. Their specialty is antique atlases, maps, plans, sea charts, globes, scientific instruments, and voyages from the 15th - 19th centuries. They have devoted over 200 large pages to just 50 items. They are worthy of the detailed explanations and numerous illustrations provided. Crouch begins with a quote from writer and book critic Michael Dirda: "As book collectors know all too well: We only regret our economies, never our extravagances." There are no regrets in this catalogue. It is all either top of the line or over the top of the line. Here are a few of these items.

We begin with an early atlas, containing the first separately printed map of the Western Hemisphere. Item 7 is a 1550 edition of Sebastian Munster's Cosmographia. It also contains the first true set of maps of the four continents. The map of North America is particularly interesting since it is so early. The Gulf of Mexico, including Florida, is reasonably recognizable. The east coast is east west more than north south, but still recognizable with one major flaw. Verazzano had spotted a ship on what he thought was the other side of an isthmus. He therefore concluded there must be a great inland sea, ranging all the way from the Pacific Ocean almost to the Atlantic. This sea is present on Munster's map. In reality, Verazzano was just seeing to the other side of the Atlantic barrier islands. Being thoroughly unfamiliar with the Pacific side, he made the continent rather narrow with a fairly straight coast, with requisite imagined coves and such, on the western side. He was also aware of the existence of Japan, but misjudged its location. The result is a large island among many small ones, parked off the west coast of America. He likewise misjudged the size of the Pacific Ocean, making it much smaller than it is. However, he does get credit for creating the first map to include the name Magellan gave this ocean – Mare Pacificum, or Pacific Ocean. There is much more in this work, including a plate of various scary-looking sea monsters such as never existed outside of someone's imagination. Priced at £150,000 (British pounds, or approximately $231,250 in U.S. dollars).

This next item has been described as "the most luxurious and intrinsically beautiful scientific book that has ever been produced." High praise, indeed. Item 6 is a first edition of Petrus Apianus' (Peter Apian) Astronimicum Caesareum, published in 1540. Apianus had earlier worked in the field of geography, and it was once thought his 1520 map was the first to use the name "America" for the New World (it may be second only to Waldseemuller). However, he would soon turn to the sky, with this great work being focused on the movement of celestial bodies, including comets. It was Apianus who first realized that the tails of comets always point away from the sun. This book features numerous volvelles, those rotating paper disks that enable one to monitor the positions of celestial bodies as they move across the heavens. They were sort of the computers of their time. This book was so rare and hard to obtain, even in its day, that Henry VIII was not able to obtain it without the author's assistance. Around 35 copies are believed to have survived, with Crouch noting that this is, "one of the, if not the, most complete copy to have ever appeared on the market." £1,250,000 (US $1,927,400).

Item 13 is a later copy of the Ortelius atlas, Theatro del Mondo di Abrahamo Ortelio, published in 1608. This is one of the editions published by Jan Baptist Vrients. Vrients purchased the stock of Abraham Ortelius, who died in 1598, from his heirs. Ortelius produced the great atlases of the 16th century, though they would be surpassed in the following century by the Dutch, who created the most spectacular examples of them all. This item is a fascinating one as it is accompanied by a letter to Ortelius from a friend named Vryfpenninck in Lisbon. Nothing is known of the latter other than he must have known Ortelius from Antwerp as he sends his regards through Ortelius to another friend there. In his letter, Vryfpenninck warns Ortelius of what type of material is likely to be seized by the Inquisition if sent there. It seems that anything erotic or heretical would not be well received. The standards of what was considered heretical were obviously quite broad because even liberal Catholic theologian Erasmus was so listed. Vryfpenninck occasionally switches from Latin to Dutch in his letter, and that may be because those in Lisbon who might intercept his words would be less likely to understand Dutch. He talks about rolling up and covering material in boxes, which while ostensibly packing instructions may have been a disguised message as to how to smuggle prohibited material into the country. £250,000 (US $385,500).

This takes us to the greatest atlas of all. During the 17th century, in the years following Ortelius, a great competition developed in the atlas publishing business. On one side was the partnership of Hondius and Janssonius, on the other Willem Blaeu and his son, Johannes (or Joan). They strove to outdo each other, creating progressively larger and better atlases. After Willem Blaeu died, his son took over, and began, over many years, producing the maps and atlas that would surpass all. From 1659-1665, he produced his Atlas Major in five languages. An estimated total of 1,550 copies covering all five editions were printed. That included 5.4 million pages of text and 950,000 copper plate impressions. Item 15 is a French edition, somewhat larger and more expensive than the others. The title, in French, is Le Grand Atlas, and it cost 450 guilders. For comparison, the average house in Amsterdam at the time cost 500 guilders. It was the most expensive book produced in the 17th century. The atlas contains 12 volumes, two on France for this edition. The American volume contains 23 maps, including some of the earliest of Virginia and New England. The west coast is rather vague, except for one misconception – California is depicted as an island. Item 15. £750,000 (US $1,156,000).

The Blaeus did not only make maps and atlases. They put their cartographic skills to the even more challenging design of globes. Item 46 is a set of their globes, one terrestrial, the other celestial. There were four states. The first was created in 1617, the last in 1645-48. These are from the fourth and final edition. This final state contains revisions made by Johannes after his father's death, taking into account discoveries made during what was the Age of Discovery. The celestial globe did not require such regular adjustments. £1,250,000 (US $1,927,400).