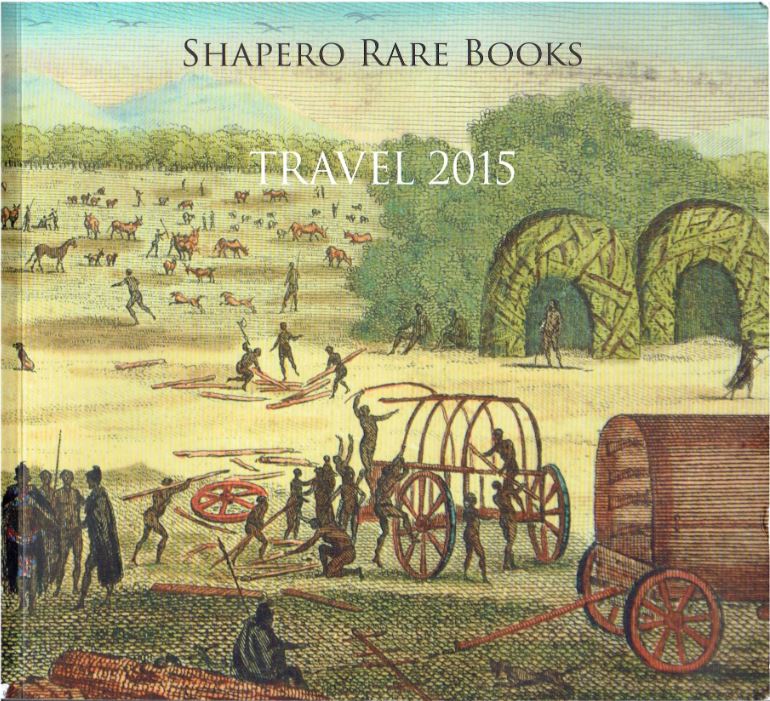 Shapero Rare Books has released a catalogue of Travel 2015. It has been neatly indexed by geographic area, but it isn't necessary to list them. In looking them over, I can't find a single place to which we have traveled not included except the moon. That can be explained by these being older books, from a time long before space travel. There is one notable topic here different from the others. Ten of the books come from the library of British explorer James Bruce and his family. Bruce was the earliest to seek the source of the Nile, setting out on his journey in the 18th century. He thought he had it, but what he found was the source of the Blue Nile. Most people today consider the White Nile the dominant branch. Here are a few examples of items to be found in this collection of travels.

We begin with the account of James Bruce's major journey, Travels to Discover the Source of the Nile, in the Years 1768...1773 (not Bruce's copy). Europeans had known literally for millennia where the Nile ended, but not where it began. Bruce had a theory, which involved partially traveling up the river, but then a lengthy detour to avoid hostile tribes. It eventually took him to Ethiopia, and then overland to where he suspected the source would be. As noted before, he did find the source of the Nile, just the wrong one. His account was finally published in 1790. Item 32. Priced at £6,500 (British pounds, or approximately $10,017 in U.S. dollars).

Next up we have one of those books from Bruce's library, and it is particularly notable as it connects him to the other great journey taking place at the same time. Item 6 is An account of the voyages for making discoveries in the Southern Hemisphere, and successively performed by Commodore Byron, Captain Wallis, Captain Carteret and Captain Cook... This 1773 set covers the voyages of several explorers, but the most notable was the most recent, by Captain Cook. John Hawkesworth was tasked with writing the official account of Cook's first voyage, from 1768-1771, while Bruce was searching for the Nile. Cook was sent out to observe the transit of Venus, but the British were equally interested in learning more about the mostly uncharted South Pacific. He did much charting of the Australian and New Zealand coasts, as well as other islands, and prepared for his second voyage which would bring an end to the long-held myth of a gigantic southern continent. £8,500 (US $13,113).

It took almost a century after Bruce to discover the source of the main branch of the Nile. Richard Burton and John Speke had set out on a journey together in Africa to locate some reported inland lakes. Finding the source of the Nile was not a specific goal, though they surely hoped to unravel the mystery. It was a terrible trip, both men becoming very ill. Burton reached a point where he could no longer walk and had to be carried. Speke became temporarily blind. Burton was forced to turn back while Speke continued. He reached Lake Victoria, and concluded this was the source of the Nile. He described his discovery in this book, published in 1863: Journal of the Discovery of the Source of the Nile. Burton disagreed. The disagreement became more personal than geographical. Speke returned in 1863 on another mission without Burton. This time he came back with sufficient evidence to convince most, though not Burton. A debate was scheduled between the two, but the day before it was to happen, Speke shot and killed himself while hunting. Most believe it was an accident, but others believe it was intentional, Speke not wanting to face Burton. Perhaps Speke was not as good a debater as Burton, whose explorations and writings far exceeded Speke's. Nonetheless, it was Speke who was right about the source of the Nile. Item 61. £1,250 (US $1,928).

Item 156 is an account of triumph, quickly followed by tragedy, and a century and a half of controversy. It was just 150 years ago this past July that the Matterhorn was finally scaled for the first time. There were seven climbers, led by 25-year-old Edward Whymper, with a couple of professional mountain guides, and others ranging from experienced to complete amateur climbers. For Whymper, the success came after eight unsuccessful attempts. He describes them all in Scrambles amongst the Alps in the years 1860-1869, published in 1871. The peak was reached on July 14, 1865. Triumph quickly turned to tragedy on the descent. The seven were roped together, Whymper last, the two guides just ahead of him, the other four ahead of the guides. When one of the four slipped, he knocked over the second. As they slid they pulled the next two men. All seven likely would have fallen to their deaths had the rope not broken between the four and the guides. The last three survived, but the first four fell to their deaths. The controversy debated for all these years is why there was a weak rope between the guides and the others, some accusing the guides of using it to save themselves in case of a fall by the others. Others explained the use of a weak rope saying the better rope had been cut by Whymper earlier to free himself so he could rush to the top first, leaving the guides no choice but to use the weaker rope. Most likely, it was just a terrible tragedy. £1,500 (US $2,317).

Afghanistan has never been kind to foreign armies. What the Americans learned in the 21st century, the Russians in the 20th, the British learned in the 19th. They undertook three wars in Afghanistan. This next item comes from a lull during the first. Fearing Russian incursions in Afghanistan, which might lead to an attack on British India, the English overthrew the Afghan ruler, setting up one more acquiescent to their own interests. Having seized Kabul, the British then removed most of their troops, leaving behind a compound of 16,000 of their people, around one-quarter of them soldiers, in Kabul. James Atkinson was a surgeon and artist, who accompanied the army to Kabul. During his time there, Atkinson drew his Sketches of Afghanistan. It comes across as a beautiful land. He returned to India with the troop reduction, and it turned out to be a most fortunate move. The overthrown forces in Afghanistan began to regain control from the unpopular British sponsored government. Kabul became a dangerous place for the British. They negotiated safe passage out of Kabul, but as they crossed snowbound high mountain passes, the Afghans attacked. Only a handful of the 16,000 made it back. Atkinson's book was published in 1842, the same year that so many of his countrymen he left behind died attempting to escape. Item 66. £5,000 (US $7,724).